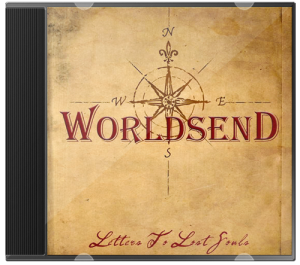 The Northern Irish Heavy Rock scene is in the middle of a revival. Be it the Power Metal of Stormzone, the Hard Rock of Trucker Diablo, the Sleaze Rock swagger of Million Dollar Reload (to name but a few) this place is a real hotbed of talent. Yes, all these bands have very obvious influences, but then heavy rock is not a genre based on originality as such. It’d be harsh therefore to label Norther Irish acts as more derivative than those from elsewhere. Belfast’s Worldsend is a band that, while its influences are apparent if not quite as blatant as some of its contemporaries, has come up with its own unique version of an established sub-genre – Prog Metal.

No song encapsulates Worldsend’s style than the album opener, ‘Without A Trace’. It comes in on the back of some smooth guitar work from McCloskey before giving way to a crunching riff, pinned down by the tight-as-a-tight-thing rhythm section of Paul Boyd and Steve Campbell (now replaced by Alistair Campbell). Currie introduces himself with a gritty verse melody, which then gives way to a soaring pre-chorus (‘laid out in front of me is a suitcase of memories..’) which in turn leads to the monster chorus (‘Gone…without a trace..’). The pace of the song makes it one of those songs you crank up in the car and just hope it doesn’t cost you penalty points. It really is a fantastic album opener and statement of intent.

Next up is ‘The Enemy We See’. Alongside the aforementioned Worldsend trademarks of great riffs and soaring choruses, The track features another recurring theme throughout the album – intricate offbeat time signatures and clever use of the Boyd’s bass guitar to fill the space where other bands use a rhythm guitar. The feel of the album may echo Queensryche’s futuristic ‘Rage For Order’ but songs like ‘The Enemy..’ (drug addiction) are firmly set in reality. And it doesn’t get any less real than the next song, ‘Warning Sign’ (spiking a lady’s drink to get your way) a song that is a real highpoint on an album. Again we have the intricate guitar work as well as top class riff, again we have clever bass guitar with its shuddering effect which is like a shiver up the spine and again we have interesting lyrics delivered in a memorable manner culminating in the huge chorus. It’s claustrophobic and totally convincing in terms of conveying the meaning of the song.

The title track is next and again it’s a song that shows a band totally at ease with song-writing, moving seamlessly from the opening classical guitar and sweet vocal to the thundering main riff and vicious vocal delivery of the main song. It’s a grandiose style of song, musically reminiscent of Queen in their very early days but also a touch of mid-era Metallica. Lyrically however, it’s a song about dumping someone by text. It seems slightly incongruous in a way that a song this big is about such a seemingly mundane subject. But it works.

‘One Dying Wish’ is as close as the band come to a ballad on their album and it’s no surprise that a band that can pull out great choruses in heavy songs can certainly do it in a mid-tempo ballad. There are echoes of Extreme III in there especially in McCloskey’s dexterous guitar solo. ‘The Silence of You’ maintains the slightly downbeat feel, though not without another hook of a chorus. ‘Alive’ brings the tempo right back up and is the album’s most ‘straight ahead’ Rock song as it blasts merrily along, though not without some complex timing.

The album ends all too quickly with ‘New Religion’ and again the echoes of early Queensryche are there with the space-age effect in the background, thundering guitar and layered backing vocals. And that would be my main criticism of the album, that it’s only 9 songs long! Other than that, there really is very little you can detract from the album. There will be better produced albums out there, simply because this was self-recorded in the band’s own Barn Studio. It is remarkably well produced bearing that in mind, and better produced than many albums with a lot more money spent on them. I don’t think the album suffers from this at all, you hear everything you need to hear and it still rocks like a mutha.

I hope the band won’t mind me saying that they are in the veteran stages of their careers, having been stalwarts of the local Rock scene for a couple of decades. Previously McCloskey & Currie plied their trade in the Rock Cover scene. For me, that is the biggest shame, that song-writers of this calibre hid their light under a bushel till now. But ‘Letters to Lost Souls’ is well worth the wait.