by Tommy Greene
in News

AVA and Shine productions last week announced a jam-packed bill for this year’s New Year’s Eve event, due to take place at the Queen’s Students Union. The guys at AVA (who also recently announced the return of their AVA Festival in 2016), in collaboration with the now twenty-year-old Shine events organisers, have pulled in a slew of acts – both old and (relatively) new – comprising several homegrown success stories, along with some firm favourites among local fans.

Of the latter category (and, not many would dispute, the biggest name on the event‘s roster), Paul Woolford will make a welcome return to Belfast after a number of recent gigs here – several riotous stand-alone or B2B shows at Twitch, as well as an appearance at last year’s RBMA Red Bull Weekender, under his Special Request moniker – and on the back end of a very successful 2015. His Modern Warfare EPs issued via XL Recordings a few months back have proven some of the most popular and dancefloor-ready releases of the year.

After an under-par performance at last year’s RBMA event (mostly owing to problems with speakers and last-minute re-jigs, which put a downer on the night for some), a few people might be looking for Woolford to bounce back with his headlining slot here. One thing’s for sure, with a catalogue of releases spanning from the techno fare (also see: his Bobby Peru material), which a lot of local fans here lap up, to the more jungle- and breakbeat-driven bass music Woolford puts out as Special Request, the Leeds-reared producer has some formidable stock to draw on. Supporting Woolford in the Mandela Hall will be Jordan McCuaig (who co-runs the Night Institute at Aether & Echo with Timmy Stewart), as well as techno pair Psychatron and audiovisuals courtesy of Guerilla Shout.

Elsewhere, Space Dimension Controller and Schmutz will take the reins in Room Two (which is presumably the Bunatee…). This pairing of acts promises feel-good factor and a dark undercurrent in equal measure, and it partially replicates the bill from May’s Boiler Room visit, where both put in impressive showings that in turn have helped put Northern Ireland’s increasingly-recognised electronic music scene on the map. The former’s adventures in space disco, techno and house grooves – along with the more direct sets of the Schmutz duo – should prove a winning formula to carry ravers over into the coming year. For a rough idea of what to expect, and for one of the standout moments in Northern Irish dance music this year, check out both Schmutz’s and Space Dimension Controller’s sets from this year’s AVA Festival.

So, a brimming line-up of performers, with an appropriately Northern Irish flavour for the most part (as well as the big-name addition of Woolford), all on offer for the upcoming New Year’s event. At this moment, it’s looking like you’d be hard-pressed to find a better party anywhere else in Ireland. 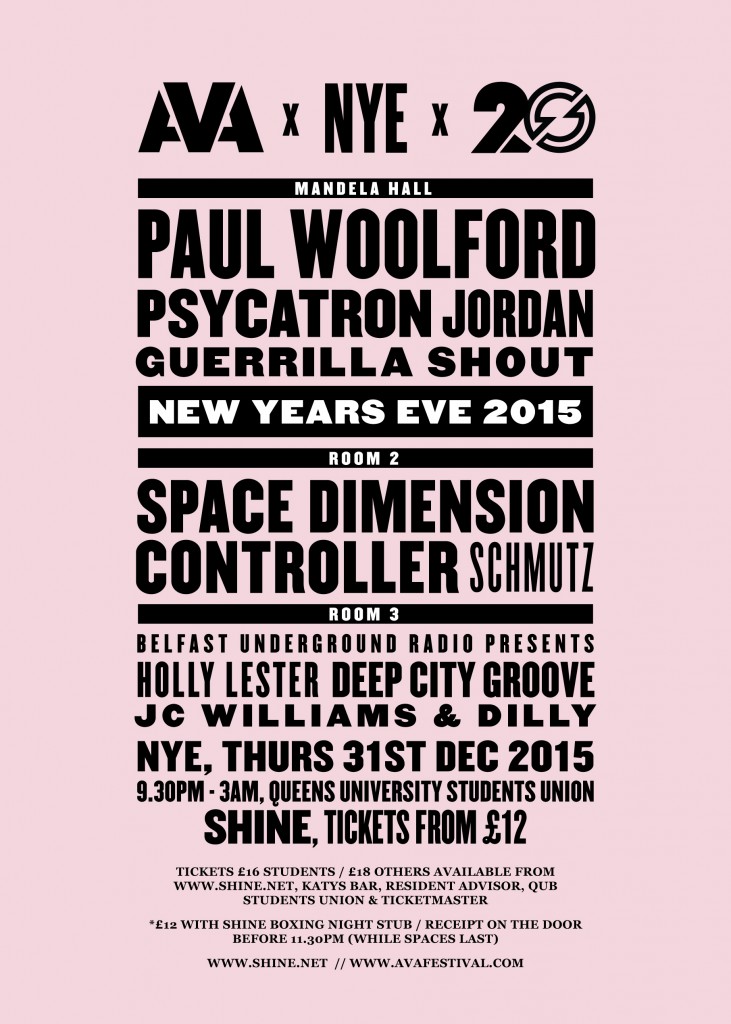