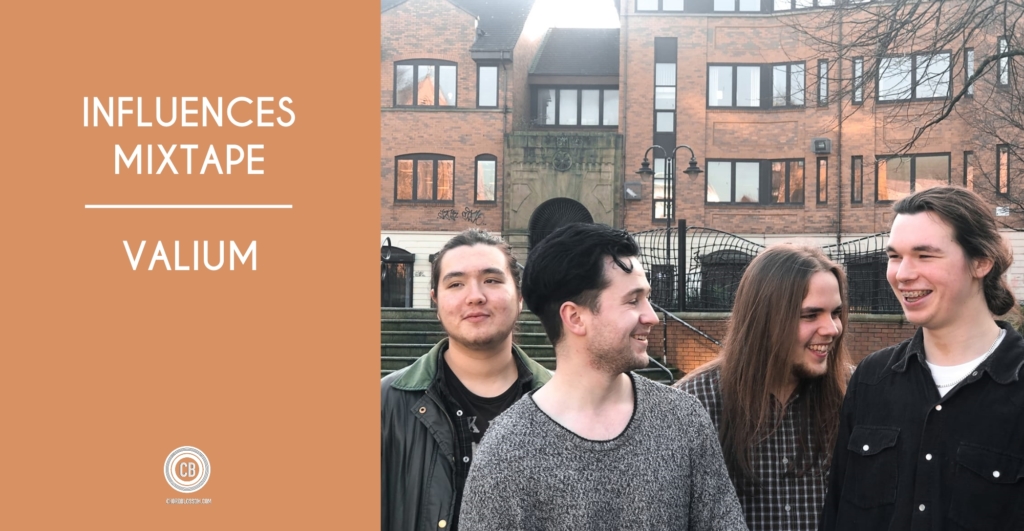 Belfast based guitar bands appear to be two-a-penny but few sound like four-piece Valium. The band take just as much influence the world of funk as they do from rock. The scope of their debut EP, released back in March, is wider than most. A mini-album at six tracks, they leap from laid back grooves like ‘Live in the Lightning’ to the almost sleazy sounding ‘Villains’.

This Feeling’s a Wave is confident in itself with definite nods to their influences. With that in mind, we asked the band to give us some insight into the artists that have inspired them.

Primus – Harold of the Rocks

Les Claypool always impressed me with his creative and unique sound, his extremely rhythmic playing and his technical skill. More so than Les himself, I really admire Primus for getting such an intense and strange sound out of three instrumentalists. The way the Guitar and Bass parts interact with each other, despite their differences and how the drums bring everything together to make one interesting sound. I’ve chosen the song Harold of the Rocks, as it tells a story and has an almost free-time flow that follows the vocals; also, the drums are noice! The use of the bass grounds the song and locks with the drums, while the guitar lies on top playing a catchy riff in the verses and doubling the bassline for the chorus riff.

I’ve taken a lot of inspiration from Joe Dart, as he is always in the pocket and helps accent alongside the drums for an intensely rhythmic sound. The song Beastly is one of my favourite examples of Dart’s playin. While the bass line fits in with the drums and leads the melody of the song, Dart has multiple solo sections that are treated as verses. The band will play the main section with Dart leading the melody, before he takes a solo. The solos in Beastly have shown me that leaving space between my notes in solo sections are important to the groove of the song and that technicality isn’t the key (as the playing isn’t too complex and focuses on feel and timing).

This song demonstrated how one singing voice could be manipulated to various degrees. Mike Patton’s off road vocal melodies also motivated me to work on my own writing.

I first heard the use of alternative tunings through this song. The rhythmic style of the vocals also interested me.

John Frusciante has had a massive impact on my guitar playing snd songwriting. ‘Hey’ off the Stadium Acadium album is one of my favourite RHCP tracks. You can hear Frusciante duck underneath the vocals and swell back to the top when there is a pause in the singing. Every guitar part cadences in the perfect way, leading in the next section of the song. The guitar solo really captures the whole vibe of the track. It sounds like its coming straight from his brain and heart. I try to channel some of that energy into my own guitar playing, but for me the atmosphere has to be right. Frusciante sounds like he has a clear path from his brain and heart to his strings.

Back in 2016/17 I started getting into artists like Kendrick Lamar and Anderson.Paak. At first I didn’t understand because the groove on the tracks were so different to what I was used to hearing in rock music. ‘Suede’ by NxWorries is a good example. The drums groove like the result of dropping a bowling ball into a pool of syrup. The early snare and open hi-hat sound so crazy running lazily alongside the quantised drum-machine hi hat. And that guitar sample just swelling up behind it all. Wild. Nowadays, I’m always conscious of where I’m gonna place my notes and chords around Matt’s drum hits and Dave’s bass playing. Am I gonna go early or late on his kick and snare hits and how much so? It’s instinctual though, there’s no science to it. It either feels good, or it just doesn’t groove.

The Beatles – In My Life
I’ve always been a fan of The Beatles. Not only John, Paul, and George’s songwriting but Ringo’s drumming.

I feel Ringo is underrated as a drummer. Ive always been a fan of ’song’ drummers. Drummers who play, and fit perfectly into the song. This song in particular is a perfect example of this. Leave all the fast chops and fills at the door and try to fit into the overall sound. Ringo does this perfectly. So I try to follow this example in my own playing and not just ‘play’ the drums, but play ‘music’ with the drums. Of course I have to show off a bit live in the live shows though.

Art Blakey had been my favourite drummer for most of my life. His jazz drumming is of course impeccable but its more his ‘feel’ behind the kit which has inspired me and many drummers around the world. Such as the famous Bernard Purdie and Peter Erskine. I always remember my friends grandfather, who is a jazz musician, saying the most important thing for a band is not to sound good, but feel good. This has stuck with me throughout the years and really made ‘groove’ such an important thing to me.