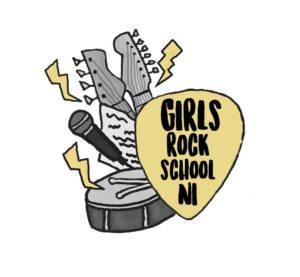 Established in March 2016, Girls Rock School Northern Ireland was the very first collective of its kind in the whole of Ireland, north and south. Since then, there is now a Girls Rock! Dublin; with Girls Rock Camps and Schools have been popping up across the world since the very first camp was held in Portland in 2001. We are part of a global movement of rock camps and sessions worldwide, united by the common desire for gender equality in the music industry. We are currently a volunteer collective, with each of the tutors giving their time all in the name of “empowering girls and women of all ages to riff, rock and roll!”

It’s been a very busy year for GRSNI. We held our very first term of adult classes in March this year – a four week series of classes in electric guitar, bass guitar, drums and vocals with graduates performing the songs they had learned in one giant band. There’s a great video of the classes and some of the final performances, all set to ‘Rebel Girl’ by Bikini Kill (one of the songs we learned over the term) – you should watch it to get a good idea of all the fun you’ll have if you join GRSNI!

In May we took over the Women’s Work Festival for a whole afternoon, with our friends from Girls Rock School Edinburgh and Girls Rock! Dublin. We hosted a 2 hour ALL AGES session (with a drummer who was only 6 years old!), a panel discussion on women in music and all things Girls Rock! and then a live performance of our Spring Term graduate band the ‘Vicious Females’ during the official Women’s Work showcase in the Oh Yeah Music Centre.

During the Summer we screened the Irish premiere of L7’s ‘Pretend We’re Dead’ music documentary at the QFT and we also held an all ages session on the Oh Yeah Music Centre stage at Stendhal Music Festival. There we had 45 minutes to encourage as many girls and women to come on stage and try out some instruments and by the end of the session we had a 4 year old on guitar with budding drummers and bassists playing live on a festival stage!

In September we held our first fundraiser party with a quiz, raffle, bakesale and disco at The Pavilion Bar – we were gifted amazing prizes from the likes of Skullduggery Tattoo, The Oh Yeah Music Centre, Queen’s Film Theatre, Flying Tiger and The Black Box. September also saw us taking over the storefront of Fresh Garbage on Culture Night Belfast with amazing performances from graduate band Tigers Not Sisters and tutor bands The Sea Close By, Vokxen and Sister Ghost. The money donated on the street and at the quiz earlier that month helped us to fund our Autumn term, so thank you to everyone who attended and donated!

October and November of the year had us back in the Oh Yeah rehearsal rooms teaching our Autumn term classes (with some equipment generously donated to us by Matchetts Music). I was also invited on BBC Radio Ulster to talk about what we do.

During the term we were thrilled to have graduates from the Spring term to come back to teach, which is something that the GRS ethos is all about; confidence building and leadership. There was a lot of amazing talent in the classes, including some members of local bands and solo artists like Rebekah Fitch joining to meet likeminded women and to learn new skills.

Graduation night was fantastic, with the bands performing the songs they had mastered in a short time, live on the Oh Yeah stage – we even tweeted a short clip of the performance of ‘Rebel Girl’ by Bikini Kill to Kathleen Hanna and she loved it! Very surreal.

The tutors and I hope to see what the graduates get up to next and I’ve already heard that some have started or joined bands – perfect! I want to personally thank anyone who has supported this project from its very small beginnings to its much stronger and more visible form now; this would not be possible without your help and assistance. When we surveyed our students from the past term, 100% said they would return to GRSNI in the future, 90% said they were interested in being in a band and most importantly, over 80% said that due to their time spent at GRSNI, their self-confidence and overall well-being had increased. Good things are happening because of this project and I know that there is more to come.

“You’re never really sure going into something new that it’ll work out at all, especially performance related… but it was always so encouraging and GRSNI really made me want to keep it up afterwards!”

It’s been a busy and memorable year for Girls Rock School NI and we’re looking forward to 2018. Our plans so far are the Spring and Autumn terms as normal, more fundraising events (such as a karaoke night!), GRSNI curated gig nights and a very cool first ever GRSNI Rock Camp for U18s during the school holidays. If you are interested to learn more, help out or to sign-up then please email girlsrockschoolni@gmail.com.