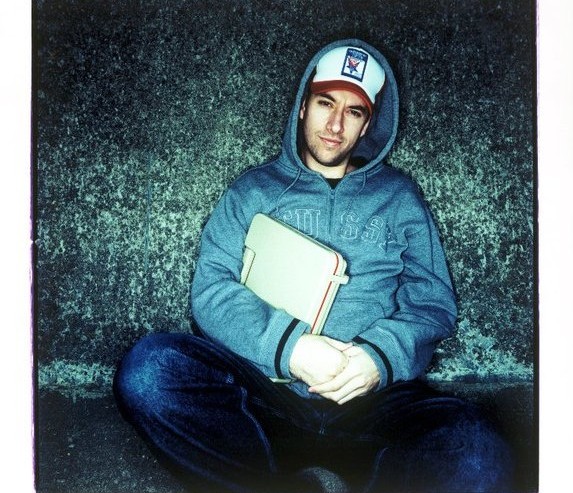 DJ Format (Matthew James Ford) is a English DJ with longevity, with four full albums under his belt and tonnes of collaborations on the hip hop scene. Throughout the years he’s carried the sounds of original hip hop beats and challenged rappers with sprinkles of real hip hop. Bring it Back a track feat Abstract Artform from Jurassic 5 represents the soil of the 70s hip hop era with classic strikes mixed with iconic instrumental innovative melodies. DJ Format reaches deep under the surface of the tune, he knows what he is looking for in a rhythm, he knows how to arrange music to suit his flow and most of all – he can get the crowd bouncing. When he was growing up hip-hop was an emerging new thing, he’s tried rapping, beat boxing, graffiti and breakdancing but music seemed to carry him through the decades.

As one of the closing acts during the first night of Stendhal Festival of Art he supplied fresh, funky rhythms in a set lasting almost an hour and half. The crowd loved it, while DJ Format bounced the energy right back into the dancing field. We met hours before his performance in front of the Main Stage where Booka Brass Band were getting ready for their set.

►I know you have been playing there previously with some beat boxers, T Wrecks (Timmy Johnston) told me about your gig…

Yeah, yeah, yeah it was around Christmas time, those guys were good! I have been coming over for more than ten years now. It depends where I’m invited, but I’ve always been lucky with Northern Ireland and Ireland. Although – I haven’t played in Dublin for quite few years, anyway it was always good.

►You are originally from Southampton, do you still live there?

I haven’t lived there since I was about 23 years old, which is nearly twenty years ago. I live in Brighton now. I moved there for a few years, and then I moved to London, Bristol and now back to Brighton. I followed the music scene; it was also handy to have access to the bigger airports living kind of central, but now I’m established as an artist so I can live closer to my family.

►You are no stranger to the festival grounds, how did you find playing at the Isle of Wight Festival?
Yes, I’ve also went to Bestival which is on the same Island. It was really nice, really mellow. It is like a typical festival, full of big acts and small acts where you can find a tent that is more intimate and an area which is more hectic. I felt like it was full of nice people.

►What kind of atmosphere do you bring in? Would you classify your performances as more “hectic” or “mellow”?

Well at this particular festival it was more like a little mellow area where we were supposed to have a party. It was really civilized; I thought it would be a lot crazier. That can be a good thing if I have enough records with me that are different, I can play some other things, I don’t have to play the party stuff to get everyone moving- maybe I can just take it easy and play some raw, mellow stuff that I really enjoy.

►You see- when I am getting ready I pack clothes, cosmetics maybe some alcohol, but you travel from across the sea with …vinyl’s. How do you choose your track listing, is it the same set for every gig?

Not exactly, but I do like to prepare ten or twelve records in a row and I’ve got lots of little sections where there might be fifteen records that I like from old school hip hop, soul and funk going to a little bit of Latin, just so I can sound effortless in the way. As at the festival I could think: OK– people could be here as not necessarily as fans of my music, they are here to hear all sorts of stuff, so I can’t be self-indulgent and play lots of my own tracks and expect everyone to know this so I try and play well known songs but versions that not many people would know of. For a guy like me who wants to hear something new like exciting drum rhythms and keep everyone happy I tend to look for records where the versions are modified to the point where people sing along only realising half way through that they actually know the track. I’m not the kind of DJ who wants to play the most popular records and get everybody dancing and think that I’m the greatest, because that is the easiest thing that a DJ can do, that’s too lazy. I want to play songs that I’m passionate about, but somehow still keep my identity and have that sound that people hopefully come to expect from me.

I just visit record shops, everywhere I go. Everyone was buying American tracks which were great, but I wanted to do something different. During my travels over Eastern Europe in 90’s were looking for the music shops with my friends. It wasn’t hard to find CD shops, but sometimes we would have to bring a vinyl with us to show them and they would help us find the places, it was really difficult. We carried a portable record player so we would pick up anything that looked interesting and just listen.

That is my passion; I hate to say this, well I just hope it doesn’t sound bad, but that is my passion way more than DJing is, to actually go out digging and try to make discoveries.

►Do you find other DJs work inspiring?

Mambo Chick who is from France, she has fantastic taste in music, fantastic record collection, she is so enthusiastic and energetic it’s always a pleasure to DJ with.

►How do you work on the piece, do you tend to test the tracks with the public before putting them on official record?

Usually, nine times out of ten I would make a beat at home, make some loops and send it to the rapper. Then if he sends stuff back to me I can get inspired by what he is saying and need to arrange the music to the subject matter that he is talking about and find some things to scratch to it. It’s mostly going back and forward collaborating a lot, but when I was working with Phil Most Chill on The Foremost album it was so easy. I would just give him a really simple beat, just to say ‘hey, this is just an idea Phil, check it out, see if you like it’ and he would send me back a whole finished song. When I was listening to it I was thinking ‘I don’t really know what else I need to do with it’, he can bring a simple loop to life, because he is so charismatic. I felt like I just needed to put the finishing touches to the record that are just settled enough to give it what it needs. Sometimes it’s so hard to find the balance between doing enough to make it interesting, but actually not doing too much and not changing the track.

►Whenever the track is completed do you use your own ear to judge the quality? Or do others help?

It’s mostly my own ears, but sometimes it’s a really funny feeling – I don’t know if you ever get it yourself in anything creative that you’re doing – when you share it with someone else, even without getting their reaction if it’s not right you just suddenly realise. That moment when you share it with someone you get this feeling in the pit of your stomach that this isn’t right.

►These days the perspective of a DJ is quite different from when you started in this business, does it not annoy you when people expect you to play the usual dance songs?

Of course, but you have to remember that I have had my day. Djing is just changing, people don’t want to hear what a DJ is going to present to them as a new thing. People would rather hear stuff that they know and would sing along to, some can even put their phones into my face and say ‘play this!’ or ‘plug my iPhone in!’ you know? At the same time what annoys me is that many DJs are caving into that shit. I take a stand and I will not compromise my beliefs, I won’t play music that I don’t love, I won’t play any records that I don’t own. I think in the way that I was there on the dance floor I would boogie to a set that is on at that time, but it is getting harder and harder to find places to do this. There are many DJs who get frustrated too fast and they give in – that is the sad truth.

►Is there anything you are working on at the moment, can we expect another album anytime soon?

It doesn’t work for me like that anymore; I work all the time on different projects, but not necessarily on a full album. Like I said before, I’m almost 42 years old, I don’t have the same hunger and determination that i had earlier. It’s difficult because I feel like I have made all this music for so long and I feel like I cannot repeat myself. It is like with any type of art, once I will feel the inspiration coming I will put it on the record.