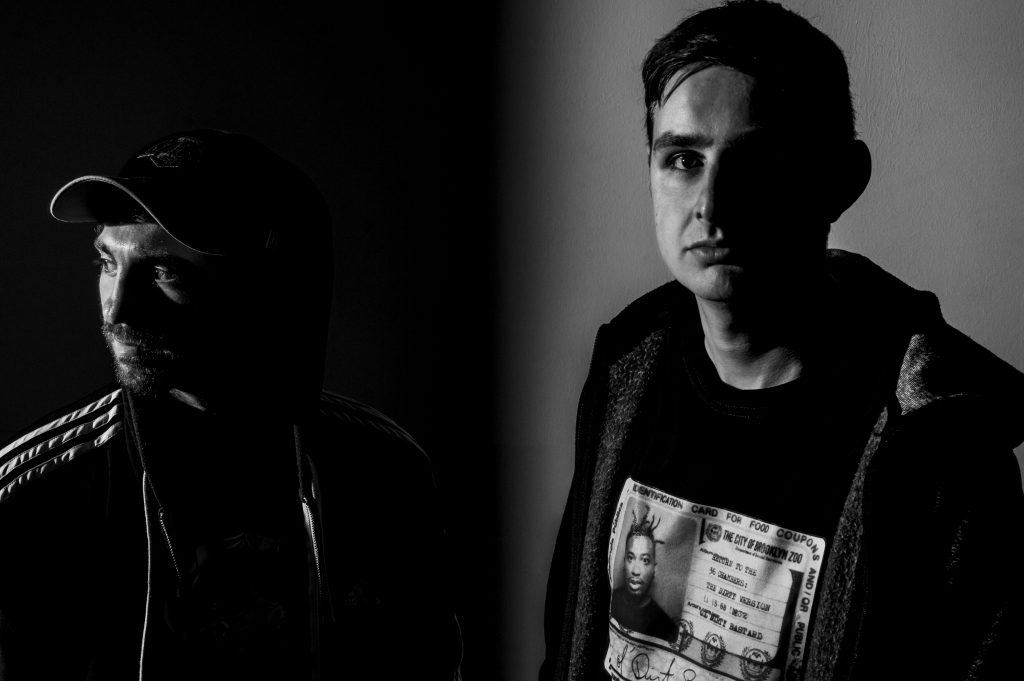 Kronus: I got the name Waking Android from my best mate he had been using it as a gamertag. I thought it sounded cool the second I heard it. The android that is awake!

Kronus: I have been making noise from I was a kid playing in a few different bands that never really got off the ground! Our sound is a combination of many genres and influences. It’s boom bap Hip-Hop at the core but there’s elements of rock, dubstep, electronic and other genres in there. I think it’s a little different from most hip hop and a lot of non rap heads are telling us they enjoy it which is great.

dsgrace: From a lyrics standpoint it doesn’t matter if it’s a direct line or cryptic or some obscure reference. You wouldn’t catch us saying anything for the sake of it. Even if it’s some outlandish metaphor it’s always gonna be relating back to who we are either as individuals or as a duo.

dsgrace: We both have solo projects from the not too distant past but really right now our only focus is on the Waking Android stuff. As a group we recently released our debut EP, Adrenochrome, and have been playing live a lot of the back of that. It’s short and to the point, but was never intended to even exist! We were working on a full length album but people kept harassing us for stuff so we put this out as a stopgap. I’m extremely glad we went down that route though cus the buzz from it has been crazy.

Kronus: We played three festivals over the summer there which were all great but Stendhal took the crown. The crowd were unbelievable and that forest was rammed. It was emotional haha.

dsgrace: I’m going to have to go with Stendhal too. The atmosphere was ridiculous. Festivals are always special as you are getting to play to an audience who very possibly has never heard anything like you before as opposed to your core audience at a hip-hop gig. Supporting Strange U, one of the biggest acts in recent memory in UK Hip-Hop was great for me, especially as they checked us out and were really impressed, that’s a huge co-sign and was very motivational as we were preparing our EP for release.

dsgrace: The entire response since our release in July has been phenomenal. We are definitely still riding that wave. We have played loads since then, including three festivals, got spins on UK and Irish radio and it has just been a great feeling nonstop watching the buzz build. I think the best thing about it is the amount of people that would not have gave Irish hip-hop the time of day til they took a chance on us praising it like crazy but also having their eyes opened and being up for hearing more stuff from here. The only real low is though we have built this whole buzz for ourselves, publication wise apart from you guys, our friend & blogger Scribblin Willy and TheJournal.ie we are getting pretty slept on in my opinion. I reached out to a lot of people and a lot of the time it doesn’t come off, but thats not the reason we do this anyway. I was rackin my brain and that was the only thing close to a low so we are doing alright!

Kronus: I can’t imagine doing anything other than making music it’s something I’ve always done from I was a kid. I’d probably just drink and play video games more than I already do Haha

dsgrace: I’m the same, I’ve been pursuing this on different levels for over 10 years now so it’s just part and parcel of life for me. I’m able to integrate it into my working life but spend a lot of time being lazy and doing nothing about it so I don’t even wanna think how bad that would get if I didn’t have something like this to focus on

Kronus: I’m gonna keep this homegrown and say King Kong Company, The Rubberbandits and our friends the DBMCs.. All three acts put on an incredible live show and the craic would be unreal. If you haven’t seen any of these guys live you need to sort that out Asap!

dsgrace: I’m all about the advancement of Irish hip-hop and have been even before I was doing stuff live and all so my answer is gonna be very centered on that. Without hesitation I would say the DBMCs from the ‘Norf Koast’, Steve Loc & Dexter who also call Belfast home and the North West Hip-Hop team of Shane Deane, The Dizzfunktional BMC & Amanda Healy from Derry. As well as that being the real core of our extended team, that would be a highly varied and entertaining live show. We are on a kind of joint set vibe with the DBMCs at the minute and the twice we have done it so far has went down a storm.

Kronus: I wouldn’t be fussy enough to ask for anything out of the ordinary I just want the ingredients for a few White Russians

dsgrace: Two real letdown answers for ya here I think haha. Nothing special on my mind either, Jameson, Coke and a bottle of Buckfast is about as far as I can imagine. Wireless mics on the tech rider though cus thats just always more fun.

Kronus: I feel confident enough in the project to say get a tour organised after we put the album out! We put the EP out and had three festivals to play within a week of doing so, so I definitely think that’s achievable at least around the UK and Ireland. We also wanna continue to change peoples view on Irish Hip-Hop. It’s a scene that’s been about for a very long time and there have been some great great acts that people have shun because they don’t like a genre they’ve never bothered to listen to!

dsgrace: 100% all about bringing Irish hip-hop to a wider audience. We had someone whos a pretty important figure in the history of Belfast music say we might very well be what breaks Irish hip-hop to a bit of a wider audience in the city which was great to hear. I dunno what it is with our stuff, maybe that between the two of us we know so many people they are willing to give it a shot, or the influences coming in from other genres or whatever, but going off what we have done since this came out a month and a half ago I feel confident enough in our position to make a bit more of a splash with further material.

Kronus: I draw inspiration from alot of musicians. When I make a beat I can throw in a wee trick that I have learned from listening to Dr. Dre or something I learned listening to Eric Clapton, there’s influence everywhere. My biggest inspiration thou would have to be my uncle, Roysta. He got me into the scene when I was only a kid and I learned to use fruity loops by watching him making beats.

dsgrace: I could sit here and rhyme off hip-hop artists I loved growing up all day but I would not have even dreamt of doing this without the locals that came before me. It was hearing people like Dex, Seaz, Noize Thievery, Reck, Slaine & Dunbar rapping and really, really making it work and sound great without compromising their accent that was the catalyst in me fully believing in this working here. DJ Koncept was really important in pushing and encouraging me too. I remember seeing 028 supporting Fliptrix & Verb T live though and that is when I really thought “Yep, I really wanna do this properly, live shows the lot”. Now I’m inspired by the crazy scene that is finally taking shape here after bubbling for so long.

Kronus: So so many. There’s some amazing acts from all genres. I would just encourage people to get more into local music and support it. If your into soul or or metal ska or whatever look up bands from here and support them. There’s an incredible amount of talent in this country that is undiscovered. People complain about the state of music today. Real music isn’t on the radio, that’s advertisement. Real music is in a bar down the town and the fee on the door is a couple of quid, if there even is one!

dsgrace: As mentioned above the DBMCs, Dex & Steve, North West Hip-Hop. Possibly the most influential figure in Belfast hip-hop is a guy called Seaz. He’s without doubt one of, if not the best producer in Ireland as a whole. He put together the Sewer Rats tape which is the most important release here no doubt and he brought a lot of my most influential artists together on the Fomorians tape. It meant a lot when he asked me to be on his project, iLL LiT. Arcane Soakes’ vocabulary is absurd, he is definitely beyond his years and Krizz Marxx is also insane with the lyrics. He is gonna be involved in a lot of stuff coming soon.

dsgrace: We have started work on our full length album though its still early days. We don’t want to put a date on it particularly as we have a bad habit of letting things fully lag til deadline day but we would like to think that will be with you this time next year. Aside from that we have a few nice gigs lined up at the minute that are still under wraps and we have a few guest spots on the upcoming DBMCs album. Away from rhyming Kronus is producing the official first full length album for Shane Deane. Antidote Soundsystem and myself are putting on Jehst in Voodoo, Belfast on the 15th September with a great support bill for Elixir #3.