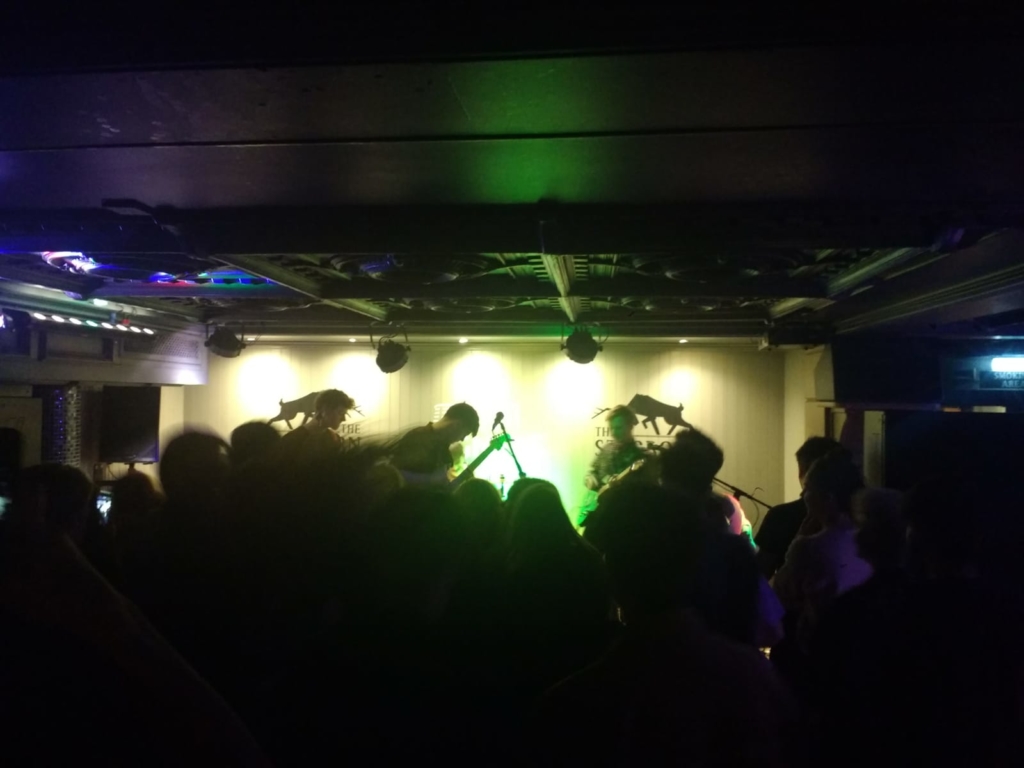 Ask anyone living around the North Coast what their first trip to Kellys was like, and you’ll get a list of stories coming back at you about overcrowded uni buses, fake ID’s, fake tan, and other extremely hazy memories of dancefloor nights with club classics pounding in the background.

Or at least that’s the Kellys I’ve been told about by countless mates of mine. Even though I’ve grown up on the North Coast, before this weekend I had never previously ventured into the place. Crazy, I know. Which made Friday night’s gig my first trip to Kelly’s. And it was nothing like the image I had in mind.

As part of the recently launched Kellys Roks series of monthly live shows at the legendary Portrush venue, this gig was the second event in a new initiative by the owners to reignite the live music scene around the coast and to give a platform for local bands and rock fans alike to get their regular share of guitar-based goodness.

Punchy riffs welcomed us as we walked through the doors, with Villa in France having started their set just a few minutes earlier. Looking out from under an assortment of baseball caps and floppy fringes, they embraced the unenviable task of being first act on stage with catchy tunes that had a sizeable posse gathering in front of them long before they threw in ‘Teenage Dirtbag’ as a mass karaoke crowd-pleaser.

There was only just time to grab a drink from the bar and catch up on the football score before Sleeping Outside stepped out under the bright lights. Two of their members weren’t available after being double-booked at the last minute, meaning they had to borrow John (drums) and Dillon (bass) from Little Arcadia, and they were keen to apologise in advance should things not necessarily go according to script with their makeshift line-up. They needn’t have worried.

The following half an hour was an exercise in high-energy pop-punk that didn’t take long in bringing about the first moshpit of the evening. Their single ‘Off White’ was an early highlight and the intensity stayed high as they rolled into a fantastic, gnarly cover of ‘Your Graduation’ by Modern Baseball. To be fair though, all I cared about as their set came to an end was that they managed to find room for some Weezer, with their own raucous version of The Sweater Song. And they didn’t let us down with their take on the classic slacker anthem. They didn’t look old enough to have even been around when that tune first came out, but clearly have great taste in music nonetheless.

For many people in the building, it felt like the whole night was building towards the third band taking to the stage. Little Arcadia were formed in Coleraine in 2012, and have gathered a fiercely loyal following of fans if the mob impatiently waiting before their first song was anything to go by. After years of honing their craft, this was their last ever gig and it felt like a celebration right from the start.

Their songs were barked back at them by a crowd who knew all the words and were not shy in making that known. The moshing reached a new level in front of the band, while family and old friends stood proudly watching on from the sidelines. You couldn’t avoid the overriding emotion in the room and the genuine sense of community that was evident everywhere you looked. In between spontaneous stage invasions and people embracing one another on and off the stage, the band beamed with smiles throughout and churned out tunes that were as tight as the skinny jeans being worn by the majority of their adoring audience.

“This band has been a very big part of my life, and it’s so nice that you could all make it along tonight,” said frontman Dillon Templeton, still bursting with enthusiasm as he breezed around the stage with his pals in what was his second appearance of the evening after his earlier guest slot. The curtain came down after a boisterous encore, not only on tonight’s set but on a remarkable journey that the band and many of their friends have taken together over the past seven years.

Any act would find it tough to follow what we’d just witnessed, so thankfully the headliners for the evening had plenty of recent experience on the road to draw upon. Having supported Snow Patrol  on their Northern Ireland tour last year and getting ready to do so again as part of the massive Ward Park 3 gig at the end of May, Castlerock’s own brand new friend are riding the crest of a wave right now. “We’ve been away touring for a while,” said charismatic lead singer Taylor Johnson between tracks, “and it’s amazing to be back on the North Coast…we didn’t know if anyone would even turn up tonight!”

They rattled through crowd-favourites from their NI Music Prize-nominated album ‘Seatbelts for Aeroplanes’, with the superb title track prompting a deafening singalong from their army of devoted followers. Room was also found in the set for some new material, including one called ‘Plastic Flowers’ which brought out the very best in the younger Johnson brother, Logan, on bass guitar duties. They kept the party going until late into the night, and the buzz around the venue continued long after they’d brought things to a close. With their relentless gigging schedule over the past while, you can hear how polished they’ve become as a band. Big things await for them in the years ahead.

And at this rate, the same could be said for Kellys band nights. No frills, no fuss, just quality live music for a fiver. Hard to argue with that. I don’t imagine this is the last time I’ll be back through that door.