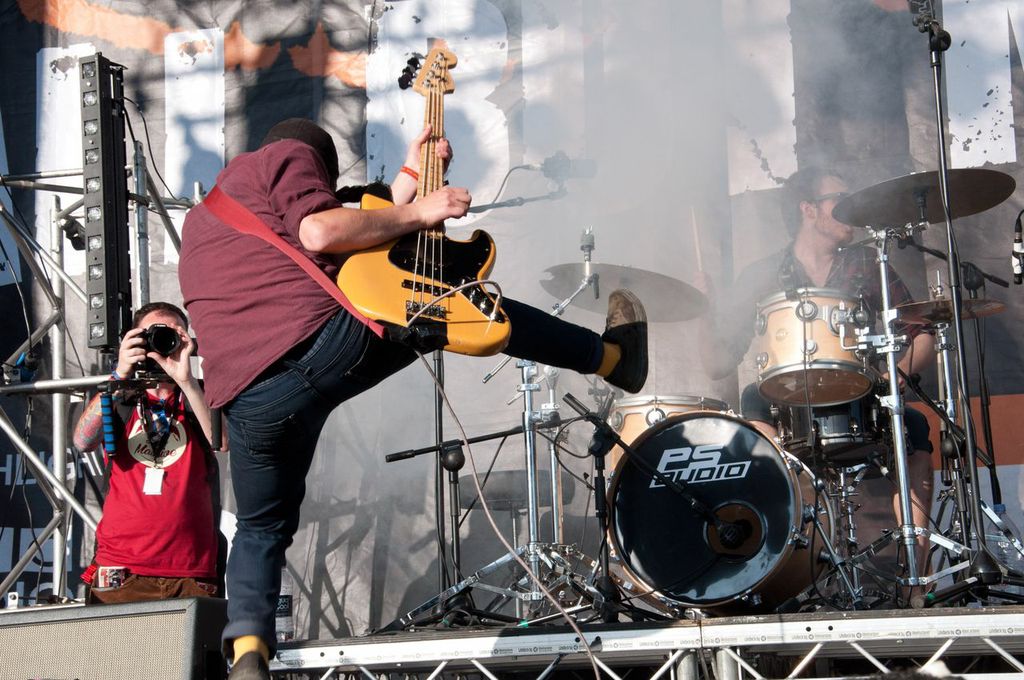 Heavy and melodic is the of the order day for the trio Axis of on the Small But Massive stage. The band impress throughout their set, with songs like ‘Brobdingnagian’ and ‘Lifehammer’ going down a treat with the rather sizable audience. Proper good ole circle pits form that span round and round till exhaustion hit. There was nothing vicious about that, it was a good, over enthusiastic mid-afternoon jog. The fellas in the middle dancing had the right idea. Niall promises to return to the mountain next year even if, “It’s just a load of hippies with me on acoustic  guitar”! Many of their loyal supporters will happily follow them there. CM

Who doesn’t love a circle pit. ‘We Dine on Seeds’ duly provided it and helped wake up those limbering souls ready for a party!

So here we are, third from last on the bill and standing in front of us are the baby faced More Than Conquerors. It feels good to be a music fan. Their lofty placing is proof of the confidence Paddy Glasgow and Co. have in the Belfast four, and their belief is duly deserved. There is often talk of acts having “incredible years” but nobody has staked their claim as local heavyweights more than MTC. They grabbed the 2012 festival season by the scruff of the neck came out as the name on everyone’s lips.

There is a debut album on the way which mean we are served up with various slices of it’s upcoming wonder. ‘All That We Can’ is a monstrous track, packed with chunky riffs and thumping drum beats. ‘Jaw’ on the other hand opens with a dirty bass line climaxing into a colossal breakdown. It’s the ferocity of their playing combined with their swagger on stage which has helped them garner an ever increasing following. The only thing tighter than these boys riffs are their jeans! They’ve got some punchy crowd pleasers in their repertoire too with “When The Well Runs Dry” and a grittier “Go On, Go On, Get Out” giving their congregation no respite. Heed our advice. Go see this band. PC

Their “Bear Knuckle Fight” finale is a joy to be apart of. Progressing from crowd surfing last year to Kris instigating the mosh pit himself as the crowd scream the final verses. 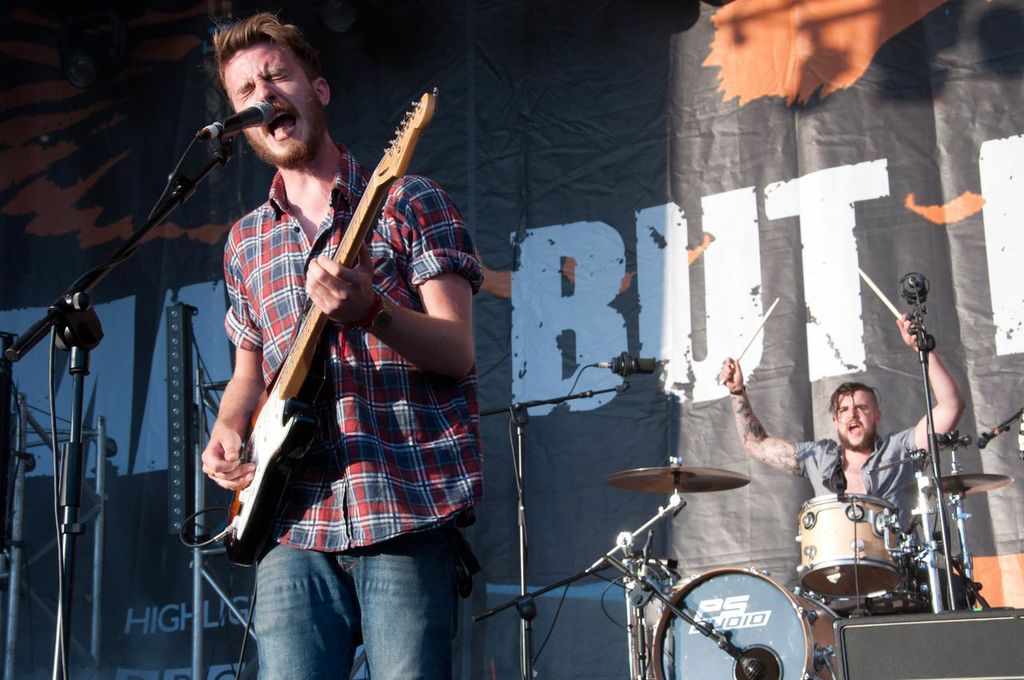 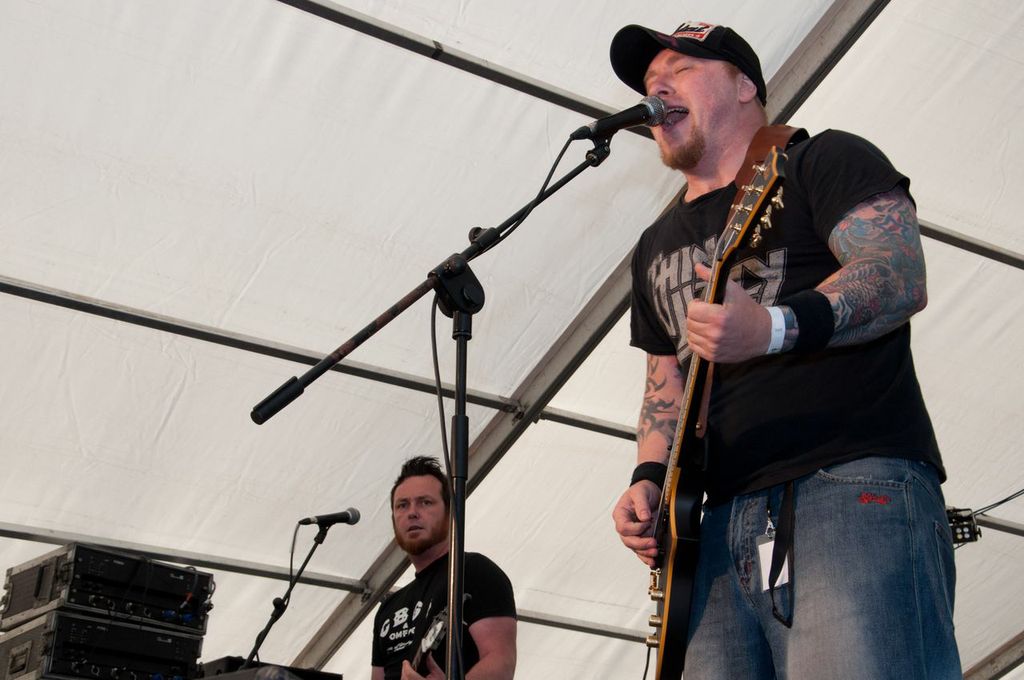 From supporting Foo Fighters to playing to thousands in France and beyond. It’s fair to say that nothing really phases Trucker Diablo at this point. The Craigavon quartet rock onto stage with smiles from ear to ear and their positivity is infectious. These lads have taken their experiences on the big stages and used it to help focus their live sound – and boy does it show. Quite easily taking home the award for the festival’s loudest band, Trucker blast through a plethora of high energy rock ballads.

Tom asks the crowd to raise their beers as he holds up his own. He takes a gulp and then plays the opening chords of ‘Drink Beer, Destroy’,to rapturous applause. ‘Drive’ is another crowd favourite with the added bonus of another guitar solo! Power stances and all, a highly enjoyable performance from the dark horses of the weekend. PC

Glee might have tried their best to suck the cool out of “Proud Mary” but Trucker cover it with style and is exactly  the type of hidden gem which you want at a festival. Tom was right, we did know all the  words.

If you are in any doubt as to whether the gig you are at inspires a positive outpour of energy and rowdiness, it is worth analysing the Flying Beer Ratio to confirm your beliefs. Simply put, if the number of cups of beer thrown into the air during a band’s performance exceeds the amount of songs the group in question plays – then the band have passed the test. (though it should be noted that cups of beer thrown AT the group should not be counted towards the equation).

It’s safe to say that Pocket Billiards pass the Flying Beer Test fairly early on in their set, such is the energy that the ska-punk collective exudes. Despite the fact that it seems to have been a struggle to fit the whole band on stage (why they weren’t scheduled for the main stage is anyone’s guess), the band put in a rollicking great performance. Old favourites like ‘Belfast Town’, ‘So Many People, So Little Time’ and ‘Spide’ sound just as good as ever, while the band also introduce some new tracks into the mix, like ‘We Don’t Want No War’, a song which sees the band exploring a metal sound for the first time. Such is the love for the group that they end up returning to the stage for an unexpected encore, to the delight of the enraptured crowd. A real class act. CM

Chiptune-ska track ‘Tetrisaurus Rex’ has become the highlight of their live sets, with the “knees up” dance during the keyboard parts becoming something of a trademark for the group. 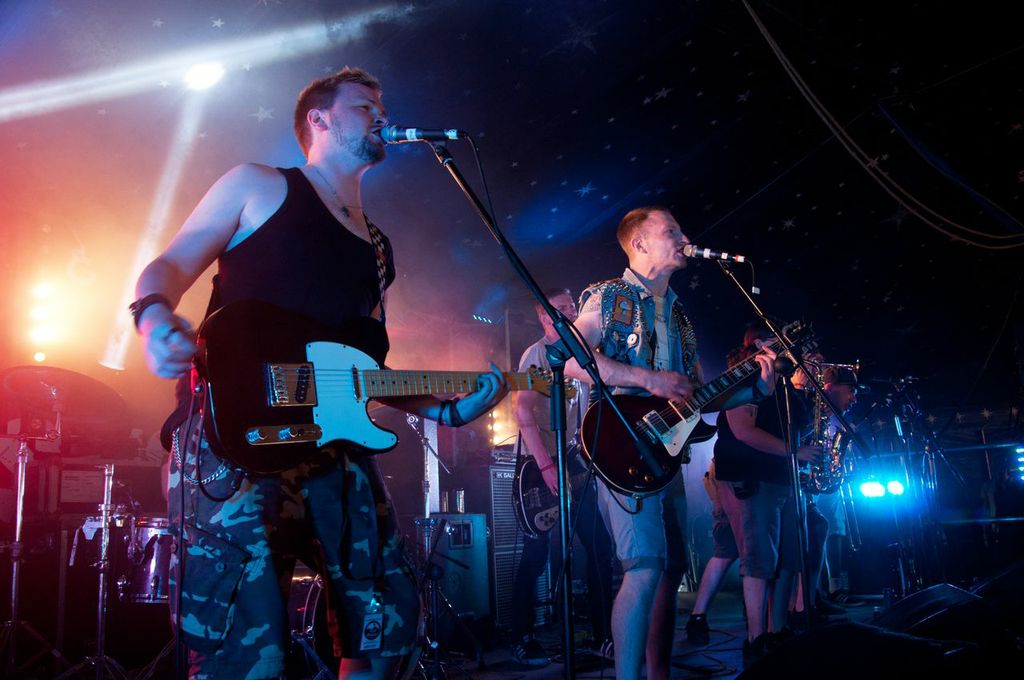 Following a long delay, Peter McCauley & the gang a.k.a, Rams’ Pocket Radio, take to the stage as the final act at the Small But Massive Stage. It seems to be something of an emotional event, with Peter giving a speech about the great memories he has forged at Glasgowbury over the past few years. However, he doesn’t let this get in the way of his set,   their set chocked to the brim with some great piano-rock tunes. There are some rather odd staging moments during the performance. During the first song he appears to use sample pads to play piano chords instead of using the keyboard, yet there is no denying his natural talent. Coupled with his ability to craft a fine, emotionally tingled song like, ‘The Sickness, ‘The Taste’, ‘The Stuff that Went Before’ and ‘Love Is A Bitter Thing’, whilst not being afraid to bring out the more poppy numbers like signature tune ‘Dieter Rams…’. CM

Kris from More Than Conquerors joining Peter McCauley to sing co-lead vocals on “1&2“. 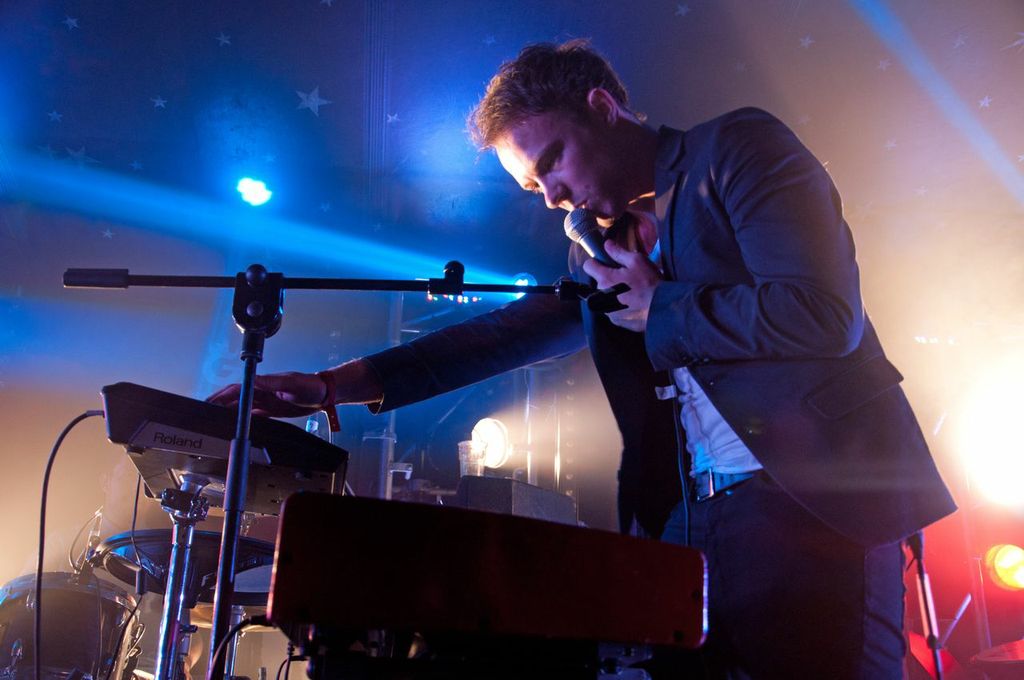 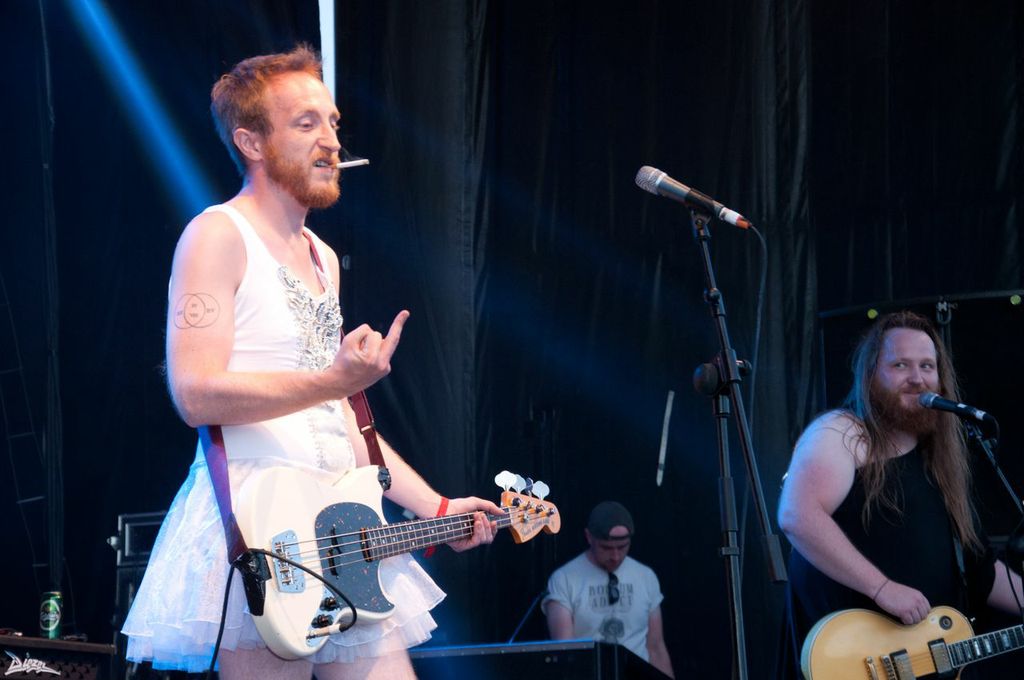 While the temperature starts to drop and the sun goes to sleep behind the mountains La Faro take their place on stage. Looking a lot more glamorous than usual wearing some lovely, glitzy ladies wear. Wolf whistles and cheers emerge from the large crowd gathered around the main stage as the lads get stuck into their set while giving the punters a bit more leg- than they possibly requested. The crowd go into a frenzy, a mosh pit begins to emerge and lots of sunburnt bellies are now on show. Many of the male fans brave the ever increasing cooler temperature with a warm welcome. They franticly swing shirts in the air to fan favourites ‘Easy meat’, ‘Ballad of burnt Dave’ and ‘Cold dog soup.’

Dave shares a joke with the festival goers and some good old fashioned Northern Irish banter is thrown back and fourth. Jonny takes the time to apologise to the unfortunate people at the front for being able to see what he had for breakfast. The lads then go on to surprise the Glasgowbury-ers with an unbelievable cover of The Beastie boys’, ‘Sabotage’. Watching the crowd go buck-wild you’d swear you were at one of the larger festivals like Download or Sonisphere – the atmosphere is incredible. Not only did the La faro lads look swell in their lovely dresses they also rocked the crap out of the final year of Glasgowbury, leaving it a tough act for even the Answer to follow. ND

It’s Lafaro playing at Glasgowbury AND they’re in dresses. What more could you want

I wonder if The Answer were aware when they were booked for Glasgowbury that they would be the final act ever to play on Eagles Rock?! Either way, they are a fitting closing act for the festival, being a band who played the festival in its early years before going on to worldwide notoriety.

If you support AC/DC as many times as these lads have, you’re bound to pack a mighty punch. New single “Spectacular” has the signature Answer sound of sweeping riffs and power choruses. Darkness descends as the masses in the field are treated to a roaring set of classic rock inspired tunes, with Cormac Neeson the ever impressive frontman on songs like ‘Vida (I Want You)’. “On And On” brings on the head banging from those who have been seeking their fix.

It is an ultimately bittersweet end to a weekend many of us will remember for years to come. The Saturday finishes the way it began as the Samba band return to collaborate on the closing tune. If there is a legacy to had from this Small But Massive festival it is has that bands like The Answer can come from Northern Ireland. We can be international music players – and there is no doubt that bands who played up the mountain this weekend will have this festival to thank when they too tour around the world. The future is still bright. CM

It’s the most poignant moment of the entire weekend. Paddy’s speech will live long the memory. We wave goodbye, but let’s hope it is only for now. 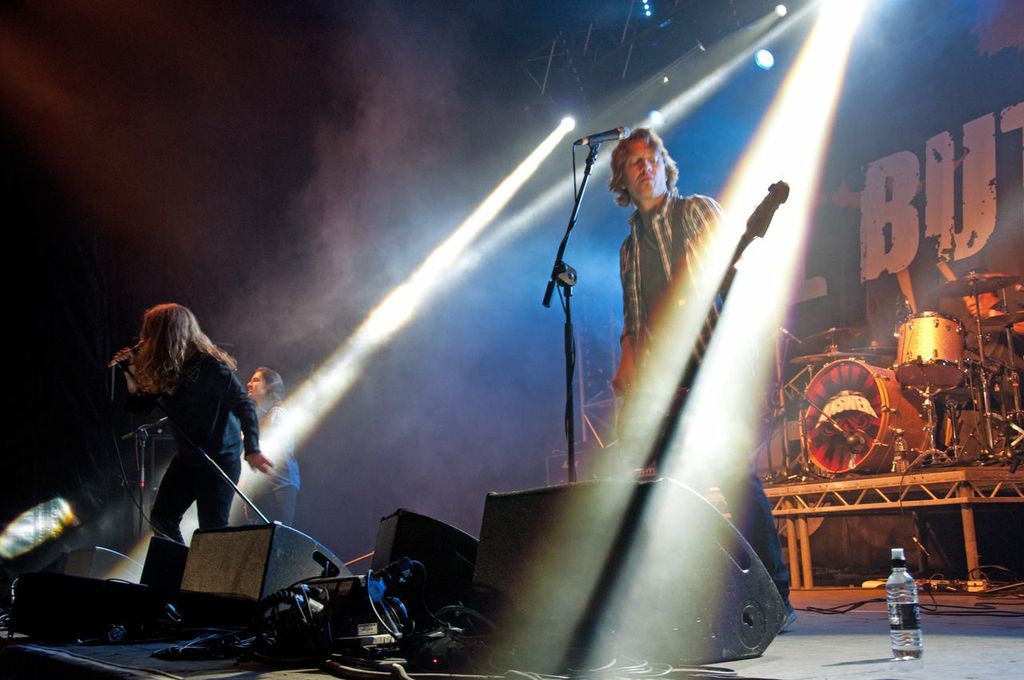