Unusually tonight there is a line quite far down the street as there seems to be some confusion over which queue to join to get into the venue. Not surprisingly then tonight’s support act Seti the First really only have a small crowd to play to. In my eyes the group are a strange choice to support Glen tonight; they are an instrumental cello based group. Admittedly not my cup of tea but the soothing sounds of ‘Victory Motel’ and closer ‘New Brass Bird’ are impressive and quite suited to the venue. 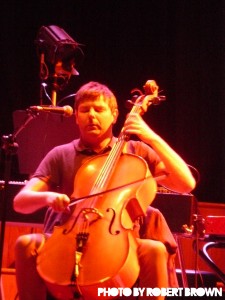 The last time Glen Hansard visited Belfast it was under the guise of his band, The Frames and tonight although billed as a solo show he is joined by members of his band although with some string and brass musicians to fill out his sound. The beauty of Glen’s work is that he is a master of both the mournful acoustics and the more animated numbers, dutifully represented by opener ‘You Will Become’ (sorrowful) and it’s more up tempo follow on ‘Talking With The Wolves.’ The man himself finally speaks with the typically humourous “What about ye?” It would seem that Glen has fond memories of his previous visits to Belfast and is glad to be back. He reminisces about his first ever girlfriend with the pure and emotive ‘Philander’ which draws loud cheers from the packed crowd. The first of many highlights of the evening comes in the form of ‘Love Don’t Keep Me Waiting,’ obviously being the lead single from his solo record there are a fair few helping out on vocal duties. The real surprise comes when it leads into an impromptu rendition of Aretha Franklin’s ‘Respect’ which features a fantastic saxophone solo. 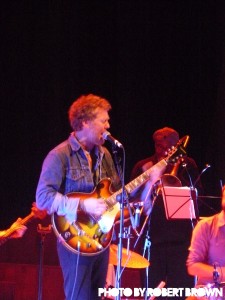 For those unfamiliar with Glen, he starred in ‘Once’ a film about a busker who falls for a young Czech immigrant (Markéta Irglová). The pair wrote and sang all the songs for the film and have worked together again as ‘The Swell Season.’ Despite not having Markéta along for the show tonight the songs are still memorable particularly with Mr Hansard asking us to help him out with ‘Low Rising’ and the phenomenal ‘When Your Mind’s Made Up.’ For a man with such much talent for writing his own material, he isn’t afraid to put his own spin on other artist’s songs with Van Morrison’s ‘Astral Weeks,’ Marvin Gaye’s ‘Don’t Do It‘ and even The Pixies ‘Where Is My Mind’ all give a run out. Such was the warmth from the crowd it is very possible that the show could have gone on for at least another hour if it weren’t for an 11 o’clock cut off at the venue. Regardless an encore featuring the beautiful and fragile ‘Falling Slowly,’ ‘Fitzcarraldo’ and an uplifting version of Leonard Cohen’s ‘Passing Through’ ensures that no-one leaves the Ulster Hall unhappy. Indeed during ‘Passing Through’ Glen takes the whole band on a jaunt through the middle of the crowd much to the delight to all those lucky enough to get close to them. If I had to recommend one and only one Irish musician to go see live in the near future, there can only be one answer, Glen Hansard. 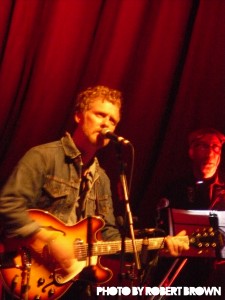