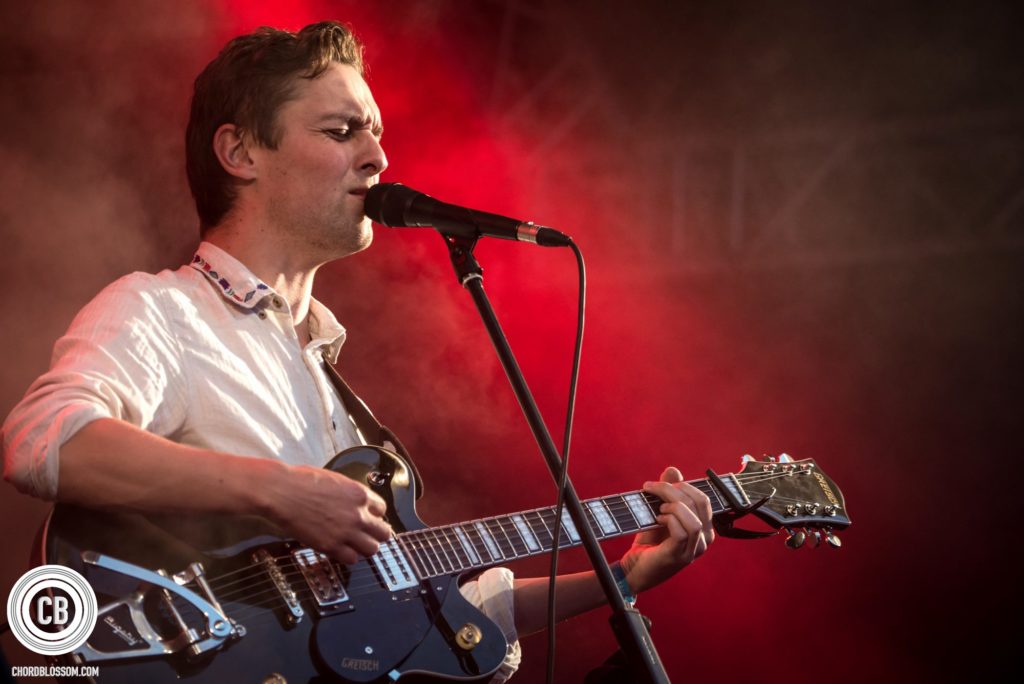 Joshua Burnside, Once There Was A King
Friday 30th November 2018 – The Duncairn Arts Centre

On 30th November, Joshua Burnside, with support from Once There Was A King, played the Duncairn Arts Centre on what was a dark and frankly freezing winter night. As I approached the venue, I was greeted by a quaint little church and what was anticipated as a night of local music could have been mistaken as an evening of spiritual enlightenment. In a weird way, that isn’t far off the mark. The room itself maintained a church like structure with large wooden beams tracing the ceiling, with some essential modern touches, such as speakers and purple lights showering the stage. The floor was arranged in islands of tables which were soon dressed with various brands of alcohol.

The night began with a short introduction from Ray Griffen (Arts and Events Manager), detailing his desire to make the Duncairn Arts Centre a “cultural destination” and his appreciation for the first act of the night, Once There Was A King. They walked up to the stage in single file, picked up their instruments and introduced themselves. Patrick Cummins (banjo) introduced the band including himself and John Flynn (vocals/guitar), who hailed from Dublin, and Ultan O’Brien (fiddle) from Co.Clare. I must admit I am not someone who traditionally listens to Irish Folk music but as soon as the trio played their first song ‘Molly Bán’, I was hooked. The song, which was largely instrumental, was layered and it showed the understanding each member had, as each instrument had a vital role in the building of an atmosphere through the intricate plucks of the banjo, intense guitar and the elegance of the fiddle howls. The only way I can describe what it sounded like was like progressive folk- “prog-folk” if you like. In-between songs, while each member introduced the next piece, there was a natural stage presence as their humour won over the audience. Before the final song, ‘Road to Monalea’, O’Brien detailed how the band was formed on the back of another folk collective they were part of called Skipper’s Alley who were invited to play a cultural festival in India and how they gravitated towards each other through being the only members able to “hack the sesh”. OTWAK left the stage with a round of applause as the audience prepared themselves for the main act of the night.

There was a short break, which allowed the audience to refill and relax, and at about 9 pm, Griffen returned to introduce the main act and his excitement was clear. Joshua Burnside, accompanied by the rhythm guitarist, made his way up to the stage as the audience’s eyes traced his journey. Burnside had neglected to tune his guitar as he joked with the audience to “talk amongst yourselves”. He opened with ‘Grapes’, a deep cut from 2017’s EPHRATA. Immediately, his voice was soaked up by the acoustics of the room and it was evident throughout the gig that he was enjoying this as he pulled from his upper register like a preacher may have done years earlier. At the end of the song, he stated that it was an “absolute pleasure to be here” and going on to joke that it was his first time in North Belfast which was met with laughs from the audience as he went into ‘A Man Of High Renown’ from his newest EP All Round the Light Said. The third song of the night, ‘The Unrequited Kind’, was prefaced with the song’s inspiration. A story about drunkenness, trying to impress a love interest and it’s inevitable failure, it was clear he had the audience in that palm of his hand. As he performed the song, the audience was laughing along at the witty and self-deprecating lyrics, something I’d never witnessed at a singer-songwriter concert but is testament to his conversational style and his innate understanding of the world.

As the set went on, Joshua Burnside played a fan favourite in ‘Blood Drive’. Watching him perform a song I’m sure he plays the most out of any, he still looks so comfortable and you can tell he is living each word while on stage. For ‘Holllllogram’, Sarah Martin, who plays the trumpet, was brought up and this added an extra element and captured the vulnerability of the song. The addition of the trumpet didn’t end there, as it was utilised in the song ’26th Street’, this also came with an anecdote about his time in Colombia and learning about Jaime Garzón who was assassinated and how the political climate resonated with him, being from Northern Ireland. The highlight of the night was undoubtedly when Burnside played the song ‘Red and White blues’. He introduced this song with the incident that made him write it which was the UVF putting flags everywhere to celebrate 100 years since its formation and how he felt frustrated by this. Personally, this song made me emotional and as he sung the words “I’m not afraid” over and over again, everyone felt it, as evidenced by the roaring response which would have made hairs stand on your back, it was a beautiful moment of unity through music.

On the supposed final song, a cover in Paul Brady ’s ‘Arthur McBrid’e he broke the fourth wall by jokingly instructing the audience to shout “One more song” at the end despite the fact he was planning on playing another song anyway. In the middle of which he forgot some of the lyrics but was spurred on by someone at the front and he continued with a smile on his face. At the finish of the song, as expected he got up as if motioning to leave as the audience obliged in begging for an encore, he called up the other members of his band and proceeded to play his own song ‘Northern Winds’ which had some pretty guitar chords barely audible underneath Burnside’s vocals and Martin’s trumpet. The song ended and Burnside left the stage to what was a feature-length movie of a round of an applause but as he joined the back of the audience the woman beside me as well as others screamed (my ears are still reeling) “One More Song” and in the space of seconds he was convinced. He finished the set with ‘The Only Thing I Fear is Myself’, just him and a guitar and it looked like that was where he belonged.

The gig was a warm and relaxed showcase of Irish talent and the audience’s response show a desire for local music, especially in the hands of Joshua Burnside as well as the impressive support from Once There Was A King. Although, undoubtedly it was Burnside who felt right at home and was welcomed. During the gig, he spoke of the work Duncairn were doing to bring together “both sides of the community” and it felt that the music, as well as the venue itself, had that effect tonight.