For a man that has played alongside Laura Marling and Mumford & Sons, there is a sense of expectation as Pete Roe opens proceedings tonight. The intimate venue is already close to capacity but all talking ceases as Pete goes through his short but sweet set. Pete is an exceptional guitarist and his voice is soothing despite the at times sorrowful lyrics. If you are a fan of Laura Marling or Nathaniel Rateliff you should give his latest EP, ‘Circles’ a go! 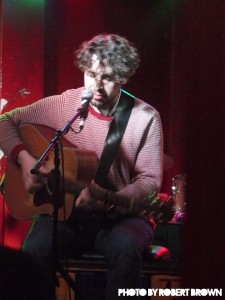 Lucy Rose is probably one of the most hyped about artists of 2012 and the announcement by our friends at the Open House Festival that she would be back in Belfast was met with great excitement. Fresh from the release of her debut album ‘Like I Used To’ which achieved critical acclaim and found its way onto radio playlists up and down the UK, now would seem like the perfect time to see her in action.

Kicking us off somewhat ironically with ‘First,’ it is a beautifully fragile track that prompts a stunned silence over the capacity crowd. As fragile as that first track is we are whisked to the more up-tempo ‘Red Face,’ it does have softer moments but while it is led by Lucy’s voice there is also a heavy reliance on the drum beat. In a similar vein ‘Lines’ starts off with the softly, softly approach until she reaches “Tell Me If You Love Someone” when the song hits a hypnotic section led by the bass and drums. The crowd have really taken to Lucy but unfortunately there is always one. A female fan down the front whistles before and after each and every song much to the dismay of everyone else in attendance. It is not even like she is trying to put her off as she proclaims herself to be a massive fan but she was extremely irritating and thankfully Miss Rose took no offence in it.

We then get to hear some of the more stripped back material with the particularly sombre ‘Shiver’ and ‘Night Bus.’ Lucy remarks at how nice it is that we are lovely and quiet during her songs particularly as it is a Saturday night in a pub. I have a soft spot for ‘Places’ and am delighted as it’s chorus “Hold your head high, think of a better time,” washes through Auntie Annies. ‘Scar’ is a bit folkier but nonetheless brilliant. Apparently her label is quite demanding and has asked her to write lots of B-sides for her single releases, she needn’t worry, her first attempt ‘The Fire’ could quite easily have found a place on her album. She finishes her set with her latest single ‘Middle of the Bed’ and her most high profile single, ‘Bikes.’ Both songs draw a real passionate reaction from the crowd and on cue (“Everybody scream out loud!”) they do just that. Her encore is chosen by the audience, ‘Don’t You Worry’ and it is perfect. As her bassist goes to leave the stage Lucy drags him back to play one final song, ‘Be Alright.’

Tonight’s show was fantastic, Lucy and her band probably put on one of my favourite gigs this year and I can’t wait to her next visit in Belfast. Clearly the rest of the audience agreed with me as it took me half an hour to reach the top of the queue for her merch stand where she was selling homemade jams and teas as well as taking the time to chat to everyone! Delightful! 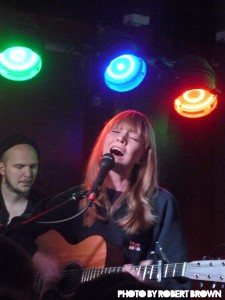