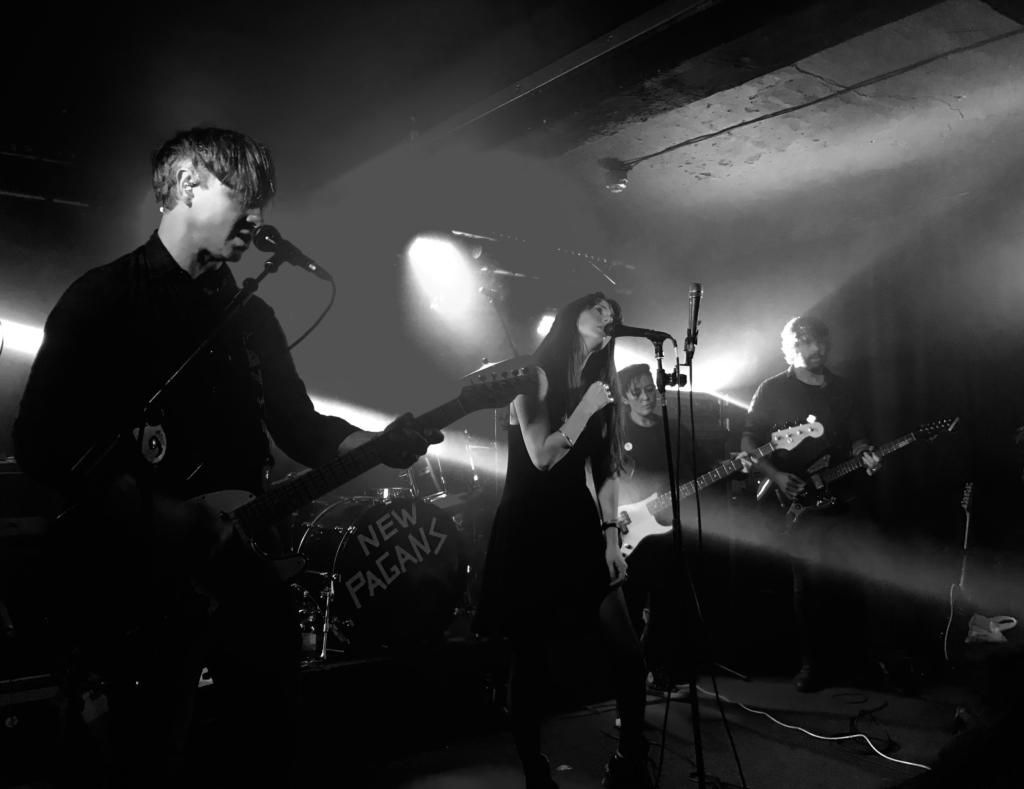 Christmas came early a handful of Sundays ago in Belfast’s alt-rock bar Voodoo. With a line-up that kept on giving, New Pagans hosted the Christmas party of the season, bringing a spectacular year of gigs and releases to a close with a little help from friends, Catalan and Careerist.

Still reeling from a run of European shows supporting ASIWYFA on their anniversary tour, Catalan’s phosphorous energy gave the Voodoo crowd an instant lift. Packing an unparalleled punch for an opening set, Ewen Friers’ project is purposeful yet unassuming. A conscientious streak underpins social commentary – almost spoken word, incidentally political, always invigorating. Friers charges his outward-focused lyrics with a sense of urgency that makes an audience want to do, while loaded, climactic guitar lines careen underneath. Catalan are all about being involved. Plucking out aspects of post-rock and punk, their question / answer style of vocal sharing bandmates is uniquely effective, a mastered art of melodic shouting.

The band’s sense of good intention spills over into their performance. An acknowledgement of Joe Strummer on the anniversary of his death, and of Belfast’s own musical community brought the room closer still. “Appreciate what we have in this city,” says Friers, referring to the tightly-knit scene of fans and bands who thrive thanks to one another. Tonight is a perfect example of it, he continues, and he’s far from wrong.

A name-change, a subtle sonic rebrand, and a stonker of a debut album preceding them, Careerist racked up quite the feeling of anticipation before delivering nothing less than expected. Charging in with album opener ‘Negative One’, amping up all the good parts (of which there are many), the three-piece brought ‘Weird Hill’ to life in the most face-smacking way. Carl Eccles’ sometimes-soft, droll delivery cracked in all the right places, giving way to guttural screams, and back again to deadpan, lips-almost-closed musings.

‘Weird Hill’ boasted some of the sharpest lyrics of the year, yet the most opaque images once crafted together. Spat out live, off-hand statements like “the internet is levelling, the internet is everything” felt like gospel. Giving them their due colour were the ominous, brooding guitar builds, reverberating throughout the many-bodied room.

While Voodoo, a treasured venue deserving of its reputation and stature in the Belfast alternative scene, did its best to contain New Pagans, the five-piece felt wildly oversized for their stage. The Belfast band lashed out punk rock with a ferocity that easily proved themselves worthy of festival territory. With an energy capable of superseding genre – admittedly, my preferences would usually be slightly softer – I was taken immediately by the sheer force of New Pagans’ sound.

In 2019 it was hard to hard to escape the Twitter sensation that was Stevie Nicks’ brand of ‘witchy vibes’, attributed to just about any woman with a slightly eclectic, eccentric style and commanding stage presence. Overused as it is, it’s a trope that couldn’t be more fitting to vocalist and frontwoman Lyndsey McDougall. With an air of anguish, defiance, elation, and release throughout her performance, she brought New Pagans’ set full circle, and the Voodoo crowd along with it.

Feeling like a unique culmination of their influences, New Pagans wove together all the shoegaze-y, grunge-y elements of 90s rock and delivered it with plenty of personal touches. Showing their gratitude to both their band and devotees throughout, New Pagans’ love for each other was palpable. “I leave every week and then come back, like a fucking shitty boomerang,” laughs Cahir. We will never split up, he promises.