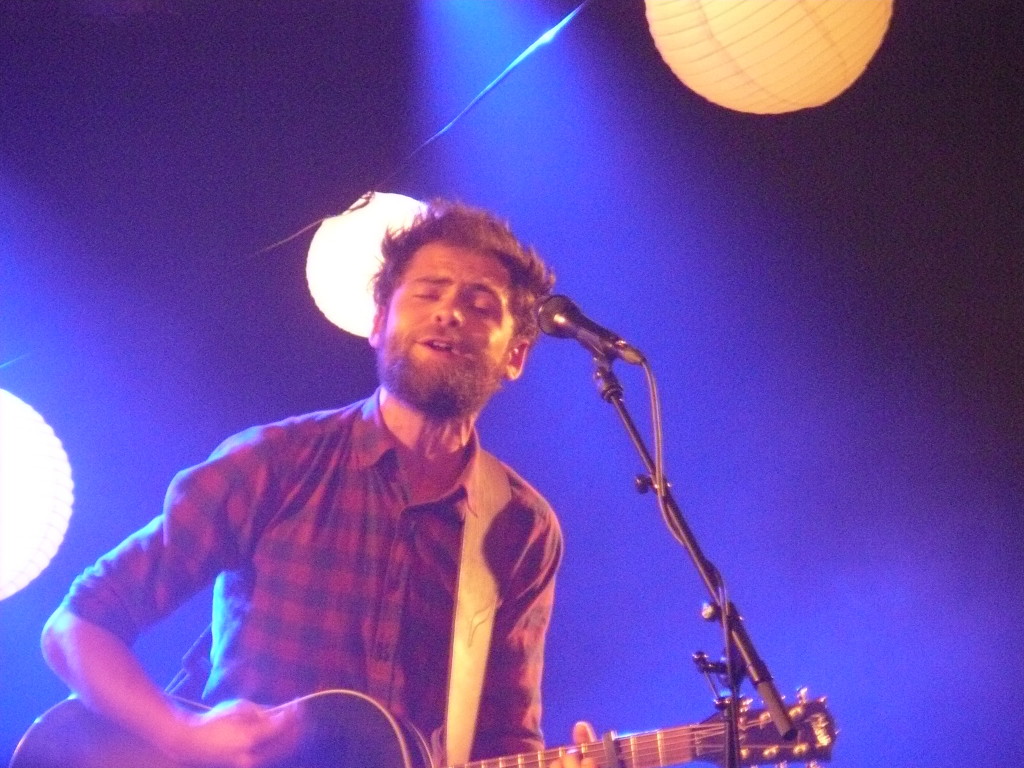 Who’d have thought that being a support act could lead to a sold out solo UK tour. I don’t imagine Passenger did when he supported Ed Sheeran on a number of his UK tour dates and, the same can be said for local artist David C. Clements who is offering support to Passenger on both of his sold out Belfast dates and his Vicar Street, Dublin gigs.

It’s quite an achievement and the line outside Queens Student Union, home of the Mandela Hall is testament to just how popular Passenger has become in our fair city over these short months from the Ed Sheeran gig. Having played to a rather packed Odyssey Arena in January the Mandela Hall is somewhat of a step down in scale but, what he looses in size he gains in intimacy and dedication from local fans who, were so desperate to get their hands on tickets that Passenger added a second date and relocated from The Empire Music Hall.

It’s an over fourteens gig, the only downside to the night – being surrounded by ‘kids’ buts there seem to be more adults there, casually enjoying a drink before the gig and mingling around the Mandela Hall and Students Union before David C. Clements takes to the stage. I’ve been a fan of David C. Clements since the Ed Sheeran gig, having only caught the end of his set I was excited to look into his music on-line and what I found I instantly fell in love with. 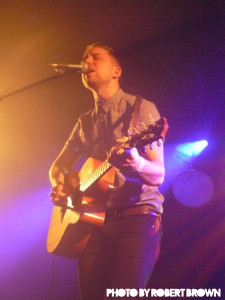 Playing in a venue as small as the Mandela hall gives David C.Clements music the added edge that seemed to be lost in an arena as large and vacuous as the Odyssey Arena. He is a brilliant acoustic performer with a powerful voice that rings out crystal clear in Mandela Hall. His set is however hard to follow as fans waiting for Passenger chatter and catch up with their companions. His opening cover of Lana Del Rey’s ‘Videogames’ set the tone for a pitch-perfect set that mixed material from his EP, The Longest Day in History’ and a few new songs that were polished and typically of David, well composed. From what I was able to make out over the din, it was a set that comprised purely of beautiful guitar riffs and jaw-dropping vocals. David C. Clements deserves all the exposure he has been getting and, he is definitely going places. 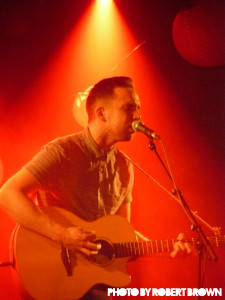 There wasn’t much of a wait between David C. Clements and Passenger and the crowd quite literally went wild for Passenger as he came to the stage surrounded by delicate lanterns – in keeping with his latest album ‘All the Lights’. There was sadly a cluster of ignorant, loud-mouthed idiots amongst the number gathered who ruined those special quiet moments with outburst of profanity and stupidity and, it continued into the Passenger set, but unlike David C. Clements, Passenger gave as good as he was getting. Mike ‘Passenger’ Rosenberg has the look of a busker and sounds unlike anyone else. The gruff one man with his guitar was completely humbled by the crowd and them just being there, he simply couldn’t say thank-you enough. 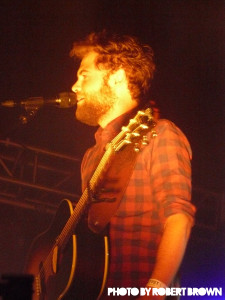 Taking time to really engage with the crowd Passenger is one of those rare artists who indulge fans in the stories behind each track. Something that few do these days but it is something that adds to the experience of the gig and helps you develop a greater love for the music and, ultimately for the artist. Over all the set was rather short and sweet but it was jam packed with fan favourites and hits galore as well as a few covers, new singles and plenty of ‘banter’. I laughed myself sore and found myself on the verge of tears throughout the gig, both funny and heart-breaking all in one Passenger gives so much more than any other performer out there at the moment. He quite literally pours his heart and soul into his music and appreciates every single person that comes to his gigs. 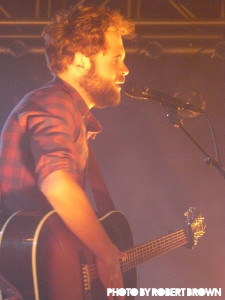 It wasn’t long before Passenger played ‘I Hate’ a wonderful number that everyone can relate. It’s one of those songs that knit picks at all those small irritations and frustrating scenarios that get under everyone’s skin and, more to the point it’s a track – more so than his others – that the crowd can really get involved with. He really gets talking and joking with the crowd throughout this number and demands we make as much noise as possible. That is just one of the things you have to love about Passenger, his ability to take you to soaring heights and sombre lows. His gigs are rife with quiet moments and times when you are required to make as much noise as possible. 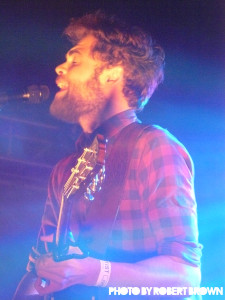 ‘David’ was another beautiful track, behind it a heart-wrenching story about someone that impacted greatly on Rosenberg’s outlook on life and, in that vain new track ‘Travelling Alone’ as song inspired by two people he met whilst busking in Europe. As Passenger said its strange how one person can affect you so much that you have to put the experience down in words. ‘Travelling Alone’ is delicious, slow and after having heard the story behind it and listening intently to the lyrics I had goosebumps. 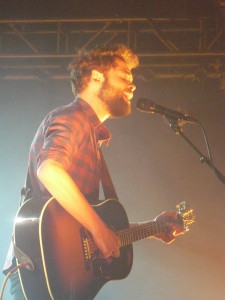 Performing covers of Simon and Garfunkle’s ‘Sound of Silence’ and a short rendition of Taylor Swift ft The Screaming Goat, Passenger is full of surprises. His version of ‘Knew You Were Trouble’ had the entire roaring with laughter before sending us into a frenzy as he led into ‘Let Her Go’. ‘Let Her Go’ is, without a doubt his most popular track. Written about one of his ex girlfriends its moving, emotive and has a quality about it that everyone can relate to. An hour and a half later as Passenger rounds the night off with ‘Holes’ which is an amazing track on which to end the night. Its upbeat, catchy and has an excellent hook. The morning after the night before I was still reeling, the gig was just so phenomenal I know I am going to be first in line to get tickets when he returns to Belfast.