One thing that I always appreciate is seeing local support acts play before touring bands, tonight is a prime example of this with our very own Allie Bradley opening for Canadian singer-songwriter Ron Sexsmith. Whenever a musician claims that they are suffering from the cold there is always the fear that their vocals will suffer as a result. Thankfully for myself and the rest of a very packed Limelight Allie doesn’t miss a note, perhaps whiskey is a reliable cure after all? Her opening song ‘Rainbow Eyes’ is one heck of a catchy track and her vocals remain strong despite the frequent move to a quick tempo. As well as being able to wow us with the powerful nature of her voice, she also has the vocal range to strip things right back to basics. ‘Simplest of Freedoms’  has a fragile and melancholy edge that perfectly reflects the  dark subject matter of human trafficking. Despite choosing not to enlist the help of a live band, the ever keen Jamie Neish provides some vocal assistance that perfectly compliments Allie’s songs. It is hard to pick a favourite track from this evening’s short set though brand new track ‘Firing Line’ shows her maturing as a songwriter. Already very talented Allie has all the right attributes to go even further, her next EP is definitely going to be one to watch. 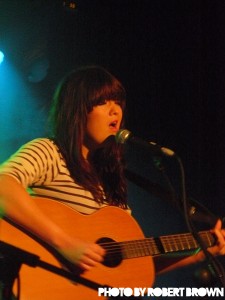 Based on the rapturous reception Allie received as she left the stage you would think that Ron Sexsmith would have a lot to live up to. Certainly he doesn’t help matters by taking to the stage slightly late which leaves the full house quite impatient. Much to our relief Ron and his band have the songs and performance to quell our frustrations, ‘Heavenly’ starts proceedings and gives those uninitiated in Mr Sexsmith’s style a chance to get acquainted with their style. ‘Nowhere Is’ finally sees his supporting cast (apparently his very own “A-Team”) take to the stage and add a bit of depth to the live show. A formidable lyricist but the focus is often provides a sobering viewpoint of life, “With the luxury of hindsight, the past becomes so clear” and one wonders if he is reflecting on his own battle to receive recognition and success in his chosen career. Yet he must be doing something right as he takes his live show to the infamous Royal Albert Hall in March, a massive achievement in itself.

The reason for this success seems to come from his 2011 release, Long Player Late Bloomer which saw ‘Get In Line’ make it into the charts and actually generate some airplay for his career. It does go down really well and sees both the young and old in the crowd assist on vocal duties. ‘Gold In Them Hills’ (the actual version features vocals from Chris Martin) sees a light-hearted and more relaxed Ron inform the crowd that he would normally play piano on this one, but since he actually has  a proper pianist on stage he doesn’t want to insult him. Ron clearly appreciates his fan base and  had allowed them to request songs they wanted to hear tonight, and even if it was a b-side or he hadn’t played it in a while, Mr Sexsmith went ahead and played them. Not to mention the fact that the more dedicated fans get treated to ‘Me, Myself and Wine.’ You guessed it about taking time to yourself and drinking ; his favourite thing in the world – much like a few of the punters here tonight then. He may still seem a tad awkward on stage but along with the technically impressive band, his live performance is accomplished and at times enchanting.

If the final song of the evening ‘Nowhere To Go’ hints at his fear over his future musical career (“nowhere to go but down”), I can honestly say that the reality is quite different; the only way is up.

Thinking of Learning An Instrument? Think on This…