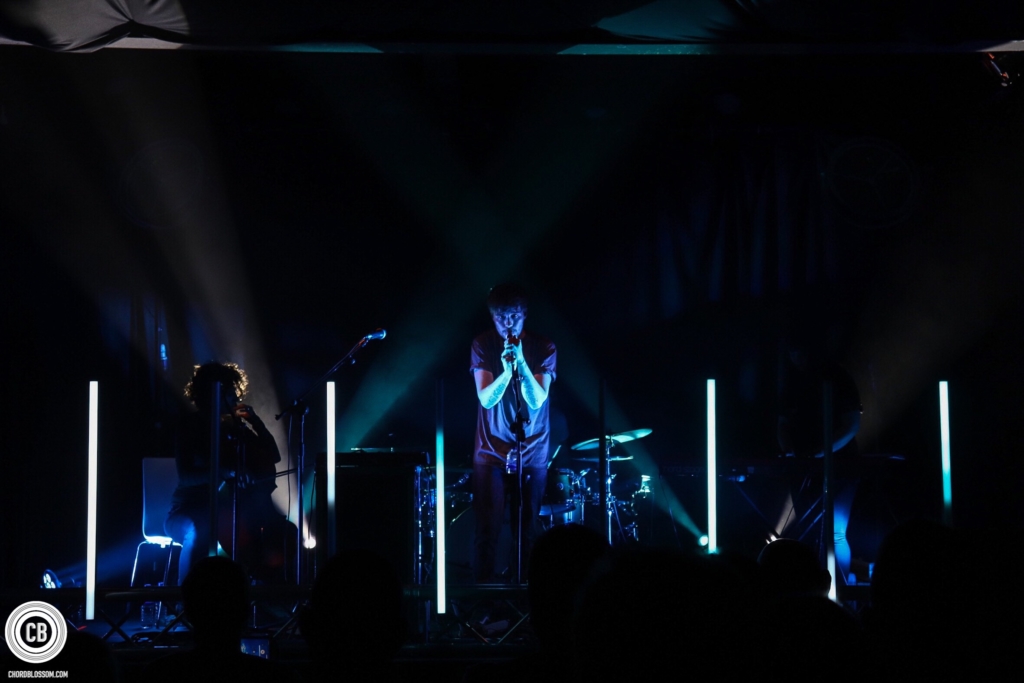 The wet smack of my boots against the concrete stained cobbles belies the mood of my evening so far. I make my way inside tonights venue, The Green Room beckoning for my attendance. I accept its rustic invitation, planting myself in an empty seat as I wait for the doors of the Black Box to open. While sat, I let my mind wander back to my first inkling of this night, and half-laugh to myself as it seems like I have been waiting for this gig for as long as I can remember. When I first met Sam Wickens, he described his music as something he did not expect everyone to like, but it would be something everyone respected. The venue is lined with those who seem to fall into both camps, as there’s scarcely room to put down a notebook. Thankfully, doors open soon after and we make our collective way indoors.

With its low ceiling and dark interior, even in comparison to some of the other venues, The Black Box oozes mood. The perfect environment for the genre-bending waves of tonight’s headliners and guests in any situation, but preparations have taken it a step further tonight. A meticulous and strategic lighting plan, hand picked support and accompanying strings are all in play to push the performances tonight to their zenith. Indeed, every act who performs tonight feels like they have elevated themselves. This is the only way in which your art should be presented according to Wickens, who I catch up with before the opening act – “What is the point in putting all that work into your album if you don’t get to present it how you want?” Sound reasoning, and it pays off.

First to take to the stage is former Chordblossom Kickstart champs Pale Lanterns. What could have been a modern take on folk rock is given a panoramic sweep by their alt-electronic rhythms and echoes. Their set is broken into two parts, each with its own unique calling card. Their quieter moments have folkish elements that bleed through with a slow rolling celtic thunder, while the ghostly croon of their vocals compliments the contemporary isolated keys. These soon give way to low slung swaying numbers, highlighted by alt-folk banshee screeches and rustic crescendos. A soaring opener with flair and panache, it is easy to see why Pale Lanterns were brought in.

Next on stage are some familiar faces. Master And Dog bring themselves together for the first time in years at the bequest of tonight’s headliner. They don’t miss a beat, settling into a comfortable flow that only comes from years of experience playing live. Their set is heavier, more filled with electronica and found sounds, but not in an intrusive way as their sound lends itself to the enviable aspect of sounding like it is fit for everyone. Nuggets of pop, rock, folk and punk punctuate the set with ease, with the group only ever leaning to one side for a small amount of time before returning to their miasma of sound. Songs dedicated to Ronan Kerr and Lyra McKee rightfully stir up the room, before the group break into a slew of fan favourites. Crisp vocals and smooth licks compile a four-song outpouring of emotive and nostalgic rock numbers.

Soon it’s time for the main event. A longer set up and simmering light show announces the arrival of the headline act. One of the most technically gifted singers in the North, Sam Wickens has drawn comparisons to acts such as Bon Ver and Jeff Buckley, but his sound seems entirely his own. A combination of bog gothic electronica, folk, rock and soul creates a sonically diverse landscape in which we are all invited, aided by the cinematic light pillars and startlingly deep string arrangement. The size of Wickens’ set grows with his voice, reaching the ceiling and pushing out behind and sounding every bit as good as you have heard.

Exclusively playing tunes from his debut album, the folk-tonic modernism of ‘All I’ve Seen’ is a delight to witness live. Its atmospheric heights defy genre, while the depth of its lyricism (See ‘Ice,’ ‘Cliffside’ and ‘Ravens And Crows’) is true world-building material. Carried by the timelessness of his aching croon, Wickens is equal parts mesmerising and magnetic (“He’s a special human” – Amy Montgomery), conducting the energy in the room with a maestro’s precision. His expansive sound spreads the length of the room as he extends his range, and when he vocally climes you feel the hairs on your neck stand to attention. It is hard not to imagine that you are seeing the birth of one of Ireland’s next great cult performers. A musician in the mould of The Divine Comedy, Bon Iver and Leonard Cohen, Wickens is already an unmissable act, and yet tonight feels like he’s only getting started.