Opening the S.O.N.I rock night at the Pavillion bar in Belfast is a three -piece Psychedelic, Rhythm and Blues band with a Rockabilly twist from North Belfast called Mudblind. They begin their set with a song called ‘By the side of the road’ packed full of guitar riffs, Bluesy bass lines from bassist Stephen Purdy and thrashing drum beats by Matthew Jameson. It is easy to see and hear why this band has made the final of this year’s battle of the bands at the pavilion. Obviously heavily influenced by Blues/rock gods Led Zeppelin there is also a hint of other influences from 60’s bands such as The Who, The Kinks and even some Bob Dylan thrown into the mix, creating a powerful sound that’s very different from anything in today’s music scene. As the band begin to close their set, Guitarist/Vocalist Rab begins to address the crowd (who have already began to head bang along) saying ‘ I was once told, you are not playing blues until you sound like a train,’ before breaking into an epic encore of heavy blues song ‘Magic Ride.’ Rab gets the punters to chant the words back to him well and truly warming this crowd up and leaving them ready to rock more.

Following Mudblind (and shockingly playing their first ever live gig together) is four-piece female fronted ‘Robot Redford (Now Novo Rapids).’ A grungy, punk rock band oozing with attitude, erupts onto the stage with songs packed full of hard funky riffs, bold bass lines and powerful growling vocals. It seems they take their inspiration from bands such as Jimmy Eat World, The Offspring and Paramore – but they also prove that they can do softer material as well, surprising the punters with ‘Follow Your Lead’ which seems to get an extremely good reception from the growing crowd, as punters seem to lean in further. As the band continue to their encore, they look like they have enjoyed every second of performing just as much as the crowd have enjoyed hearing what they have had to offer. They finish up with a song called ‘Aliens’ a hard punk rock song that seems to win the band a whole new group of fans and seems to leave the punters excited as to what talent is to follow. 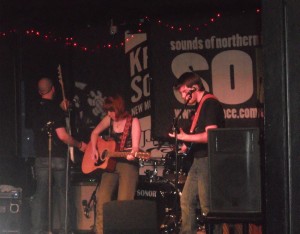 Exploding onto the stage next opening with a song called ‘Nobody Loves You, Nobody Cares’ is Alternative, grungy rock trio Shades of Jonah. Drummer John McAuley belts out drum beats that echo the unmistakable sounds of Queens of the Stone Age – Guitarist/vocalist Paul Reilly takes over with his hard hitting raspy Chris Cornell-like vocals and bassist Ryan Thompson deals with the badass bass lines, sending the crowd into a rocking frenzy as punters begin to mosh along to the guitar riffs. They follow this up with equally impressive songs – ‘Let the Hare Run’ and ‘Walk Alone’. Both songs are filled with groovy, rock hooks that explode with aggression, and they prove to be extremely popular with the now large crowd. Shades of Jonah look and sound like the rock royalty despite the fact they only formed in 2010, and it is now clear why this band was chosen to open last year’s Pigstock festival. The band finishes up their set with a song called ‘In the Well’ leaving the punters very hungry for the taste of more rock n roll.

Taking their place as the headliners for tonight is a four piece band that originally formed as a cover band in the 90’s – Indigo Fury. They would consider bands like the Foo Fighters, Muse, Alice in Chains and even the Kinks to be influences on their sound. They promise classic punchy good old fashioned rock n roll. They begin their highly anticipated set with ‘Dive’ – a metal song that almost sounds like Metallica has collaborated with the Foos. The boys seem to squeeze out as many epic bass lines, immense drum beats and rocking riffs as the crowd can handle. Although the band have changed the line up quite a few times, this seems to have modernised their sound as some songs even have a touch of influence from newer bands like the Arctic monkeys. Bassist Graeme Arthur gets stuck in with a deep bass interlude for ‘Mohawk’ / drummer James Nicholl continues to do what he seems to do best and guitarist Mike Parke erupts into a Muse style guitar riff as the crowd continue to show their appreciation via the use of their neck muscles. Continuing to their encore the band play a song called ‘When You Have To Go,’ and this goes down unbelievably well with the crowd proving Indigo fury have lived up to their high standards by giving the punters exactly what they what if not a hell of a lot more. 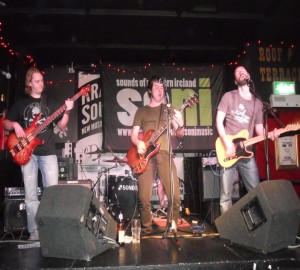 Bulleit Bourbon Battle Of The Bands