Hotly tipped by Gary Lightbody and one of the top 20 entrants in our Kickstarter competition, it is great to see Pretty Child Backfire clinch such an important support slot. A snow covered province has not prevented a respectable turnout and we are not sure whether the band are taking the biscuit opening with ‘If We Can Last the Summer.’ Their actual kickstarter entry and the stand out track of their set ‘I Wish I Knew You Better’ gets feet tapping with its irresistible chorus and sporadic hand claps. It will be interesting to see whether their forthcoming debut album can push them on to the next level as the potential is definitely there. 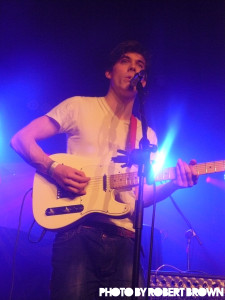 Elspeth are the second support and once again it is nice to see the local talent on show.  Boy do these fellas love a nice riff. Opener ‘Think Back’ is indie rock at its finest, with swooning vocals perfectly weighed against the angsty tone.  ‘24 Hour Paramedics’ meanwhile has a juicy riff that reeks of attitude. Indeed the whole band’s stage presence exudes a kind of swagger, characterised by extremely confident frontman Gerard Sands. Sands’ vocal range is impeccable and gives each song a sense of variety. Having only released their debut album last year one would think the band would take a break from recording but they have been working away on new material. The new material gives Sands’ the opportunity to demonstrate his impeccable vocal range and a bright future would seem to beckon. 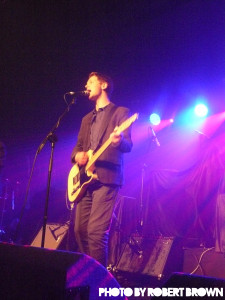 To my relief and I would imagine The Courteeners too, The Limelight is close to capacity which is impressive considering the arctic freeze gripping the country. ‘Are You In Love With A Notion’ kicks things off with Fray declaring “no talking, let’s get on with it.” This is the first of a trio of tracks from their latest album, Anna, of which predictably current single ‘Lose Control’ gets the most vigorous reaction. The indie rockers have developed what could only be described as a cult like status throughout the UK and their set list although heavily dependent on their latest release has plenty of time for fans of St. Jude and Falcon. 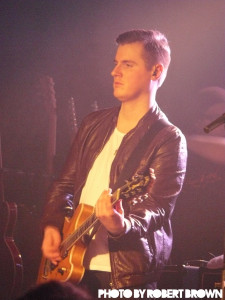 ‘You Overdid It Doll’ is emphatic, its sultry disco beat pounds through the Limelight’s PA system as more than a few beers hit the ceiling whilst ‘Cavorting’ really gets everyone going. Plenty has been made of the Manchester lads fan base being full of rowdy lads but all I see tonight is a sea of people having a great time. ‘Take Over the World’ isn’t as raucous but still inspires a sing-along. Surprisingly towards the end of the set Liam opts to go it alone with a nice acoustic set that features ‘Marquee’ and ‘Last of the Ladies.’ The change of pace gives everyone the chance to catch their break before a rip roaring finale featuring ‘Here Come the Young Men’ (lots of stomping feet here) and their most well-known song ‘Not Nineteen Forever.’ The Courteeners while showing off some of their trademark swagger appeared quite humble that so many people continue to come out and see them. But if they continue to put out material of the quality of ‘ANNA’ then this will only continue. 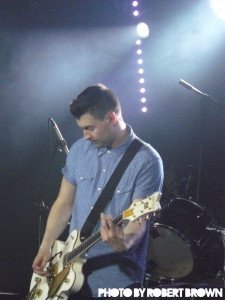