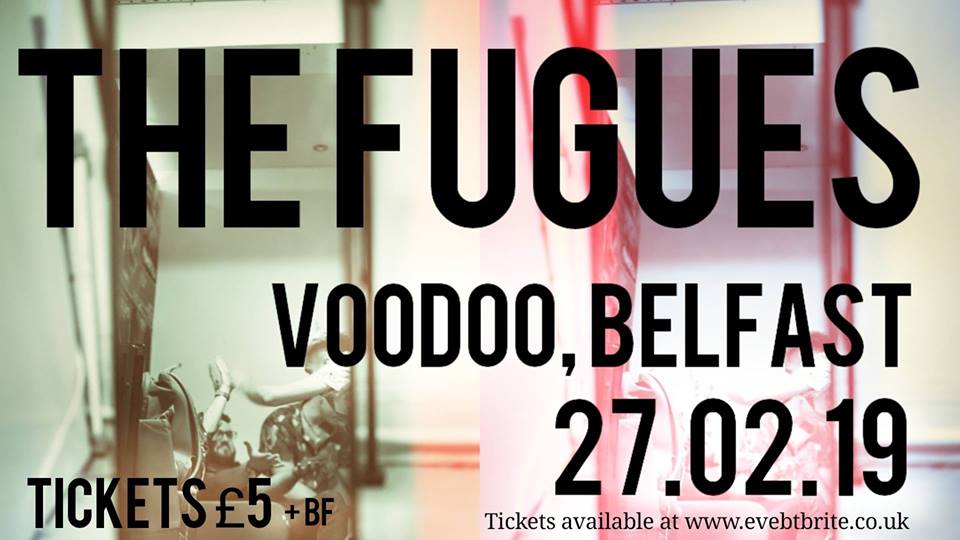 In music, a fugue(pronounced fewg) is a contrapuntal compositional technique in two or more voices, built on a subject (musical theme) that is introduced at the beginning in imitation (repetition at different pitches) and which recurs frequently in the course of the composition.*

*reference ‘Wikipedia’ – when has wiki ever been wrong eh?!

Voodoo, if you have not been there, is a watering hole for punks, alternates, creatives and misfits, so naturally, I felt right at home.  The upstairs venue space is small, but more than adequate to stage an indie band, with a loyal following and the sound system could not have been faulted.

Support was provided by the impressive Gemma Bradley. Known locally for her impressive melodies, catchy hooks and an impressive live set, Bradley perfectly set the scene for the main act of the night. One of the scene’s favourite performers, she left the show only to immediately start another set in The Spaniard. Talk about work ethic!

When the band arrived, 15 minutes after their advertised stage time, there was an instant change of the energy in the room.  People are already excited about this band and when they took to the stage, there was a swell of excitable fans to the front of the room.  Now… just to be clear, I have never seen this band live before, but, I have listened to their music on Spotify and after a marvellous slow building introduction to their first song ‘Cold Coffee’, my ears were instantly perked up by their signature bright guitar, hard hitting drum line and solid bass guitar which signalled to me that this was going to be a fantastic show.

They eased comfortably into the set with their song ‘Stephen.’ ‘Timbuktu’ came next, a slower song geared towards the ‘young and reckless’ of us out there, showcasing some powerful anthem vocals by lead singer Kaelan Power.

A few more songs in and The Fugues were chatting, interacting and encouraging a crowd that were TOTALLY on board with them from the get go!  It is clear that The Fugues appreciate their fans and their music is about the audience.  Not an ego in sight!

The harmonies in ‘America’ would be just as comfortable at Glastonbury or belted out to a full stadium as they were in Voodoo, Belfast.  Kevin (the lead guitarist) really adds something to the harmonies and his guitar playing throughout the whole set was what I think really gives this band their edge.  It is reminiscent of Good Charlotte or Red Hot Chili Peppers but, with the addition of the melodic vocals, hard hitting drums and tasteful base and piano. They have found a sound that not only sits comfortably in this era of indie rock bands, but stands out in the current climate of DIY musicians.

The highlight of the night was ‘Kodak’ mainly due to the craftsmanship of the song. A purposeful dramatic pause was included and also Power’s suggested that we all live in a simulation and this song reflected that…almost like if Black Mirror wrote a song!

Combine all this with the insanely energetic finish to ‘Like Someone Else’ the touching story from ‘What is There To Say’ and the one extremely enthusiastic fan beating the band at their own lyrics in ‘Early Mornings’ and I would say The Fugues are a band to follow, enjoy and get to know.

The Fugues wrapped their set with ‘Lady in Pink.’  It was fresh and had so much flavour that naturally the audience wanted more…cue the encore and big finish and proved that they are a group of professional passionate musicians with a flare for mixing influences to create a sound that is genuine and authentic.