Anto and the Echoes – Youth

by Sheree Jackson
in Music Reviews 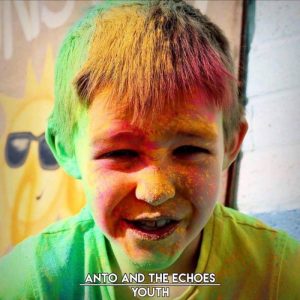 ‘Youth’ is the debut EP from Belfast based rock/pop band, Anto and the Echoes. Hailing from Fermanagh and fronted by Anthony Breen, the 6-piece released ‘Youth’ in December 2016. With a little help from Caolan Austin of Belfast’s ‘Smalltown America Studios’, this three track EP gives us an insight into the latest talent to appear on NI’s ever-growing music scene.

First up we have ‘Pick Me Up’ an energetic intro that might even get your nan up and dancing.  Positive vibes all round with melodic keys, fast-paced drumming, and catchy lyrics you’ll no doubt be singing along to before 3 minutes is up.

On ‘Echoes’ we hear a different sound from the band, it’s less indie pop and more indie rock this time around (think The View or Pigeon Detectives). Lead vocals take centre stage with this one, a single drum beat builds up into a steady rhythm. It’s not as ‘in your face’ as ‘Pick Me Up’ but that doesn’t mean it’s dull. ‘Echoes’ is a mellow track with its haunting backing vocals, but playful guitar riffs and Anto’s lyrics keep up the optimistic feel that will without a doubt become an integral part of the bands’ sound.

Closing the EP is ‘Severed Ear’.  Anto serenades on this rock/pop effort with lyrics like “I could never paint a masterpiece like you” and “When I met you I was a blank canvas/now my colours are screaming out”, He really shows off his lyrical ability on this one whilst impressing with his vocal tone. It’s not the instant earworm that ‘Pick Me Up’ is, but there’s depth to this track that ‘Pick Me Up’ lacks.  For that reason, it’s a stand out track for me out of the three.

For a debut EP from a band that have only been gigging together for the past year, ‘Youth’ is a promising EP. It’s clear there are diverse musical influences (only to be expected with a six piece) that give us a modern indie/rock and sometimes pop sound. ‘Anto and The Echoes’ can switch it up. Catch them on the local gigging scene this summer, you won’t regret it.