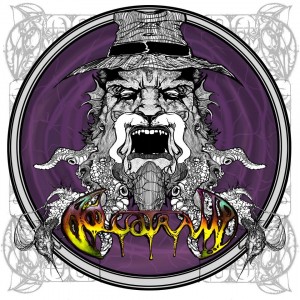 There is a plethora of rock acts at the moment taking their cue from the Sixties and Seventies, encompassing the bluesy swagger of The Doors and the doomy stoner rock of Sabbath. From Uncle Acid and the Deadbeats to Orange Goblin to Black Spiders; the list is seemingly endless and growing steadily.

Enter Belfast’s Aquatramp, complete with trippy logo and ‘unusual’ moniker (complete with amusing story of its inception on their Facebook page). Forming in 2012 and immediately getting to work on honing their sound, the band quickly released a handful of songs on the likes of Bandcamp. This, their first EP, is the culmination of those songs and others created in the roughly twelve months since Aquatramp’s formation.

The EP begins with the softly-softly sounds of ‘Better Days’, with an acoustic intro that languidly snakes its way through the rest of the song. The lovely harmonies and mournful lyrics (“take my hand, let’s pretend it’s the same”) segue into the rocked-up tempo increase and bitter, bluesy vocals towards the end. In all, a promising start.

Second track “Seek the Leader”, is similar in sound, but a different beast lyrically. This is stoner rock at its finest (and most literal): full of mystical, rambling tales of aliens, Area 51 and Roswell, and grooving on for an epic fourteen minutes. One can almost picture the band jamming with Jim Morrison et al, Big Brother and the Holding Company and Sabbath, a pile of sweet leaf on the table. After a long silence, a hidden track is revealed, one with a surprisingly modern sound. Consisting solely of an acoustic guitar accompanying echoing vocals, it tells a simple story of a mystery woman, this is an interesting addition that jars slightly; creating a separate song around this ghost of an idea would perhaps have been more successful.

Moving the goalposts is ‘The Getaway’, a rollicking ditty about sex, booze and cars. The jazzy drum and bass intro gives way to a dirty Southern rock song, the ideal platform for vocalist Kyle Lockhart’s raw yet harmonious voice. This is such a great example of a good ol’ American tune that it’s astonishing to think that these boys are in fact Northern Irish!

Final track ‘The Reaper’s Gardener’ harks back to the sound of ‘Seek the Leader’; it is clearly influenced by the likes of Black Sabbath , with its meaty, doom-laden riffs , and the ‘Summer of Love’ , with its hallucinogenic lyrics and bluesy, Doors-esque flavour. There is another tempo change towards the end – these boys do love a tempo change! – before it all ends rather abruptly and the listener returns, reluctantly, to the present day.

In all, this is quite an impressive debut. The songs are well crafted and played, and the vocals are engaging and rich. The only problem may be that Aquatramp have arrived on a scene that is already bursting with equally new and similar acts. It remains to be seen whether they are accepted and embraced by connoisseurs of stoner rock. Three of the four songs here sound quite similar to each other (with only ‘The Getaway’ providing the difference), making the EP sound a tad formulaic. It will be interesting to see where Aquatramp go from here.