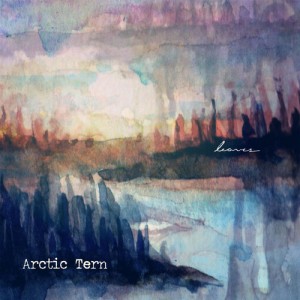 Since he released his Debut EP Paperboats in 2012 much has changed musically for Chris Campbell. He has supported the likes of Nathaniel Rateliff (This was my first encounter with his music), successfully launched a Kickstart campaign which provided over £900 towards his new project,  gone through a stage name change to Arctic Tern and he has recorded his sophomore EP “Leaves”.  So after months of waiting I am finally glad to get a listen to the culmination of these new steps for Chris.

EP opener ‘Love is not a Game’ starts with Chris gently strumming his guitar and softly singing. It may not be the most gripping EP opener I have ever experienced however by the time the harmonies kick in at the 47 second mark you are hanging on his every word. The subtle addition of a Piano, Shaker, Strings and Drums add so many textures and layers to the songs without taking away from Chris’ vocal.  Already you can tell that this is a more experienced and mature style on the part of Mr Campbell compared to debut Paperboats.

‘The Cave In’ opens with harmonies accompanying the same fingerpicked guitar. This should remind me of the first song; however I don’t feel the sense of déjà vu that would normally come in this sort of music. It is at this point that I have realised Chris has mastered the art of holding back. The song swells with an incredible beauty comparable to the likes of one of Chris’ influences “Bon Iver”. Vocally he moves away from his subdued tones into almost a shout as the song reaches its pinnacle for the first and only time on the EP. This proves itself to be another great addition to “Leaves”.

With “Light A Fire” there is a tempo change from previous songs however the focus is still on Chris’ beautiful fingerpicking, at the beginning. As Chris Sings “’Cause she swept in/ lit a Fire when I was Innocent” the drums kick in adding a depth to the song sonically. Once Again Chris’ craftsmanship is incredibly evident.

‘Ties’ is possibly the weakest song on the EP with only guitar and light string accompaniment it shows little development however this contrasts the previous 3 songs.  Despite this it is still a great song with its open tuning and darker feel, while the tempo returns to a slow and reflective one. He sings “I cut my ties to my home.”

‘We Couldn’t Have A Home’ is yet another heavy hitter on this EP. Again in this song, dynamics, harmonies and the band play a massive role. However what sets this song apart is the harmonica solo near the end giving the EP it’s only slight hint of blues. ‘Winter Come’ feels like the appropriate ending for this EP. It again incorporates all the best of the previous songs as it builds for just under 3 minutes before the song swells into the last chorus bringing in the full band Chris ends by singing “Winter Please don’t come at all.”

Last year I attended a Ryan Adams concert in the Waterfront Hall, I remember as Adams sat with just a guitar, thinking to myself that every string plucked and every note sang had been rigorously thought about and expertly positioned in the song to add to the overall performance.  The result was chilling and mind blowing  from the first song to the last. I get this same feeling with “Leaves” by Arctic Tern. Every note, every swell and every harmony feels positioned for the overall feel of this EP. The production is also fantastic with both the depth of the drums and the brightness of the piano and violin coming through incredibly well causing the dynamic changes to feel sonically significant.

With this project I believe that Arctic Tern deservedly can be labelled as a new artist to watch over the coming months and years as he slots in so well among the existing folk scene in Northern Ireland. I cannot wait to see these songs performed live and to also see what this troubadour puts his head to next.

P.S I found listening to this Ep that Earphones have a massive impact on the sound. So if you have the opportunity please listen to the Ep through Earphones and not through computer or Phone speakers in order to do it justice!