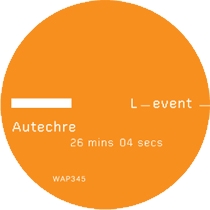 EP’s have it tough. Sandwiched in between the short, frivolous joys of the single and the intense, life-altering results of the album will always lead to exile in nowhereville. It’s a shame, as the best EP’s pack a wallop that wouldn’t be satisfied by mere singles and end where some albums don’t. This is one of them.

Earlier this year, Rochdale’s Autechre released the LP, ‘Exai.’ A 2-CD effort, it clocks in at over two hours and contains some of the finest pieces of music from these former B-boys. However, it’s too long which dulls its impact. Could this release be what ‘Exai’ threatened to be? ‘tac Lorna’ throws the unfamiliar listener in at the deep end. Rhythmic angles hit from all around while retaining an air of menace through the bass pulses. It does not stop and is liable to exhaust. After a while, it slows down to allow for more sinister, glitchy noises and pulses. A brilliant opener.

Without a pause, we’re into ‘M39 Diffain.’ With hints of Scorn and Meat Beat Manifesto, it’s the darkest number on here. Halfway through, it seems to collapse into static and UK Garage beats before the bassline knocks you for six. This is what the so-called “dubsteppers” should be listening to. ‘Osla For n’ is utterly impenetrable. This is techno that oozes tension and is utterly thrilling despite there being very little in the way of grandiose elements. Closing with ‘newbound’, the synths are used to play a recognisable melody but still do battle with the glitches and beats. A downbeat ending, and the best way to close an intense EP.

Autechre are not easy listening. Don’t expect anything vaguely tangible to latch onto. Throwing in techno, hip hop, industrial, noise and ambient as well as a list of other elements, they create music that will batter your senses but have you coming back for more while you try to figure out where they’re coming from. The best EP since ‘Yozza’ by Scorn.