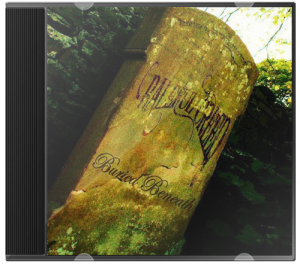 Baleful Creed’s EP, “Buried Beneath” is the latest release from the Belfast-based quartet. The classic rock lovers have been generally well received so far, playing support slots for the likes of Bill Steer’s (Napalm Death/Carcass) blues rock band Firebird in October 2011 at the Limelight in Belfast. Their live shows have received rave reviews, but does their new EP live up to expectations?

The self titled opening track, “Baleful Creed” opens the EP on a promising note. It is a full on, unabashed ode to heavy rock. For what it may lack in originality it certainly makes up for with enthusiasm, which has a contagious effect on the listener. Riff heavy, with fast paced, thunderous drumming from the aptly named Stephen ‘Thor’ Fleming, underlying rhythmic basslines and a strong vocal delivery from ‘Fin’ Finlay, this track showcases a dedicated band, passionate about what they do, which is incidentally paying tribute to rock and roll.

“Crazy Man” slows the pace down a little. With furious nods to classic rock, the vocals are very much in awe of Danzig, while the guitars and drums settle comfortably into typical rock ballad territory, making it seem like a song that could have easily made a Lynnyrd Skynnyrd album. There is absolutely nothing technically wrong with this track, but it can be hard work to sit through all of it unless you’re a dedicated fan.

Thankfully, “Her Promise” restores some expectations, delving further into the promise hinted at on “Baleful Creed”. Although it is not just as full on as the opening track, its slightly more cautious approach definitely pays off. With guitars reminiscent of Guns N’ Roses during their “Appetite For Destruction” era, it is further proof that the rhythm section of bass and drums are a force to be reckoned with, remaining resolute and powerful under the towering layers of guitar.

“Hex” is a decent follow up to “Her Promise”. While lingering in the same vein as its predecessor, it is more reminiscent of Dio-era Black Sabbath. It is pleasantly demanding, kicking off with a suitably heavy riff before leading into a solid verse guitar riff verse type structure- so far, so good. However, it really only kicks in after two minutes, where it takes off into a faster, toe tapping rock and roll song that would make Glenn himself want to get up and jive. Despite this, I still can’t seem to shake the feeling that it’s over before you can really get into it. It is a decent track nonetheless though.

The final track, “Suffer In Silence” starts off in a brooding manner, with its soulful guitar and sullen sounding rhythm section. It progresses into a moody, persistent song, with clear influences drawn from Anthrax, which then unexpectedly morphs into a surprisingly melodic solo before descending into a play off between the band and ending on a decidedly triumphant note.

Baleful Creed have been subject to numerous rave reviews so far, so “Buried Beneath” is obviously going to have a certain level of expectation to live up to. Thankfully, with its loud and proud, unashamed declarations of undying love of heavy rock, it is undoubtedly worth a listen for anyone who considers themselves a fan of the genre. Although they may receive some criticism for pigeon holing themselves as musicians, their commitment and sheer enthusiasm for creating old school, no holds barred rock and roll is both enviable and admirable. A talented and thoroughly dedicated group of individuals, the future surely holds great things for Baleful Creed.