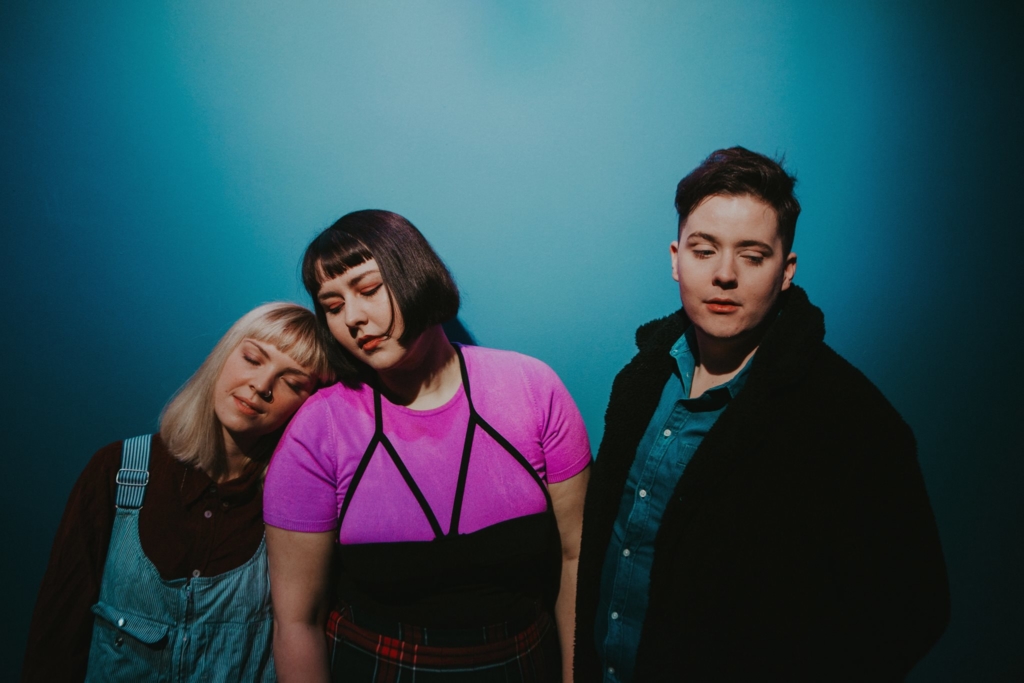 In 2015 Ryan McGroarty and Cheylene Murphy formed Beauty Sleep, joining up with Aimee Williamson and releasing first single ‘The Dark’ the following year. A reworked version of that very first single opens up their own debut album Be Kind.

A series of great singles from the band had already found an audience in Northern Ireland and beyond, the memories of the founding members’ formative years in the ubiquitous Wonder Villians replaced by new fans of Beauty Sleep.

The album begins with that first single ‘The Dark‘, which contained all the hallmarks they’ve come to embrace; the complementary vocals of McGroarty and Murphy, the neat guitar lines and a slathering of synth. Another previous single ‘The Feeling Back’ deservedly found its way towards the very top of our tracks of 2018 as well as a place on the album’s tracklist. A near perfect songs with a catchy chorus that yearns for adventure and then for lost love

From the opener onwards Be Kind weaves a web of soft disco sounds with the warm welcome of a bubble bath. The band still flirt with their oft described dream pop tag but welcome bigger and better things throughout the album’s run time.

Groovy bass comes to the fore in places, whether it’s the synth bass stutter of ‘On Repeat’ or the hypnotic line of ‘Rainbow Ballroom’. One of the most recently written tracks, t’s a stunning document of where Beauty Sleep are at now. The sadness of Murphy’s voice in the verse blossoms into a bigger, stirring chorus.

The danger in the buzzsaw fuzz and defiant refrain of ‘Lies’ is a bit of an experimental shift for the band. While they deep into slow burning moods too. The softer tone of ‘Synthetic Debris’ struggles to hold attention but Cheylene Murphy’s ‘Women’ is a breathy and quiet female empowerment tale which flourishes over soulful synths.

Big pop choruses abound on Be Kind. ‘All We See’ is catchy from the get go, but the pre-chorus of ‘Annie, are you crying?’ seems to echo in my head, even before the slick softness of the chorus. While ‘Nature Will Eat Me’ shows the heights the band have both tried and succeeded in reaching. A huge pop song, that doesn’t deny their roots as an indie band but delivers a truly rousing chorus with its own magic.

The stuttering vocal hook on there is just one example of Ryan McGroarty’s production prowess. Self producing may be ambitious but without that bravery, Beauty Sleep’s vision may not have been delivered so intact. The trio were aided in preparation of the album by the addition of drummer Ross Bickerstaff, emboldening their live shows and adding more some natural percussion, alongside Richard Van Den Bos.

However it’s the washes of synth that give the band their distinct dreamy sound. Nowhere is that more apparent than on album closer ‘Be Kind’. A woozy synth line soldiers on through choruses and breakdowns, weaving in and out of consciousness. As drums crash, guitar lines float into space and vocals rise, the takehome message Beauty Sleep leave us with is ‘be kinder to yourself’. A self love anthem.

From the opening notes of ‘The Dark’ to the climax of ‘Be Kind’, this is an album that emanates both warmth and sheer pleasure, with a feeling of familiarity on tracks old and new. From the tender moments to the danceable grooves, every shade blends together to give Be Kind a wash of vibrant colour and produce one of the best Northern Irish releases in years.