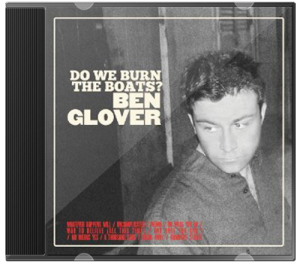 Ben Glover has already firmly established himself as an accomplished singer-songwriter worldwide with his previous 3 albums, and his fourth album ‘Do We Burn the Boats’ only enhances the Glenarm man’s reputation. His style flits in between the mellower end of alternative pop with hints of Travis, Coldplay and David Gray and the classic Americana of Springsteen and Petty at their mellower moments. Glover’s voice is a less gravel-ly Boss and less nasal-ly Petty so it makes sense.

Mellow is definitely the word that springs to mind when listening to the album. The arrangements are subtle and slick without being intrusive and they let Glover’s soft sandpapery vocals take centre stage. When you hear the words singer-songwriter this is what you expect, so people who are into this genre will lap this album up and previous fans will not be disappointed.

The album kicks off with the up-tempo, bright ‘n’ breezy ‘What Ever Happens Will’ – a good choice as it is the most ‘instant’ song on the album. Glover has already had several songs licensed for TV and Films and, with its bright guitar and positive message, I can envisage this song also finding its way into a television soundtrack. Hot on its heels is ‘Uncomplicated’ another up-tempo track that includes more from Glover’s band arrangement with strong drums and building guitar as it moves to the strong middle break. I like it a lot.

Memo is next; a more folk influenced tune complete with ‘Whoo hoo ooo oh’ chorus. Glover then brings a little Coldplay/‘Fix You’ guitar into play to give it a slightly different feel. Again, as with ‘Uncomplicated’, this lift works well in terms of the music, though perhaps the vocal needed to rise to the challenge the guitar sets and it might’ve made the song a touch more anthemic.

Do What You Do takes the mood right down – with a touch of Counting Crows’ wistfulness and longing. It’s fragile and beautiful, with the help of an organ to underline the mood and pretty female harmonies to add a touch of bittersweet to the arrangement. Fittingly, it is followed by War To Believe, which kicks in with a very Counting Crows type Country Rock guitar riff and, although Glover’s vocal couldn’t be more unlike like Adam Duritz, there is no getting away from the similarity.

Only You & I is a pretty love song and again it’s hard to get away from thinking that this will be some film or TV exec’s idea of a great song for the end of a movie. No Means Yes drops the mood right down echoing Do What You Do, complete with organ and female harmonies. It doesn’t really go anywhere, but I guess there are songs that are like that, where the writer tells his tale in a style he believes is fitting of the subject.

A Thousand Suns takes the mood back up again, not in a loud raucous way, that’s not Glover’s style. This is soft, ‘East-Coast driving’, top-down Country Rock including a ‘Na, Na, Na, Na’ chorus (not a fan of these, but I’ll forgive him). Break Away is a more edgy slice of Country Rock, and being the fan I am of melancholy music, is probably my favourite song on the album. I feel the chorus just has that bit extra resonance for this reason and the middle section goes up a notch as well before dropping down again to some effect.

The album closes with ‘Rampart Street’, the longest song on the album at over 5 minutes. More than all the rest, this is a story set to music. It’s a builder, a grower, which is a metaphor for the entire album. I love how it builds, though I must confess I expected to go further and really let go at the end, in a way U2 almost trademarked circa ‘Joshua Tree’ and ‘Rattle & Hum’ but as I have said before, I have to allow the writer to convey what he wants to convey without pandering to commerciality.

There’s no doubt that his travels to America have allowed him to immerse himself in United States culture and there are loads of American references. This is nothing new of course as America seduces all who cross her path. This is where Glover’s main market outside of Ireland will no doubt be, as the UK prefers the ‘mockney’ tones of Sheeren and the like.

Glover is such an accomplished writer within his chosen style that anything he puts out will almost automatically be worth a 3 out of 5 rating in anyone’s estimation as a starting point. To add extra stars (hearts in our case) there needs to be more than just slick song-writing, there needs to be songs to remember; special songs that grab you and won’t let go and make you want to buy the album first of all and then continue to play it. Glover has an ability to write songs that have a chance of that, especially as I have already commented, that have real appeal to those who’d seek to license them.

But it is a slow-burner of an album that for me took several listens to really get into. Some people, in these days of instant judgement may not give it the chance it needs to grow. I would also prefer a bit more edge and more crescendo moments, and there are a couple of songs, which, with a bit more of those elements, could really stand out and then stay in the memory. I have to accept that this is perhaps not Glover’s style and perhaps would require him to vocally go where he doesn’t want to go. He knows his own audience and perhaps does not want to alienate those who have put him where he is in order to go chasing a wider, perhaps younger, audience.

But this is a fine slice of easy-listening singer-songwriting and we should be proud of Ben Glover as another fine Irish musical export.