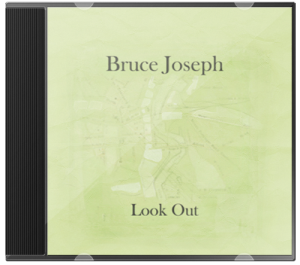 In this iTunes age, it can be hard for artists who believe in the ‘album’ ethos. So, you have to take your hat off to someone who believes in his songs enough to put 11 of his current crop up for consideration at £8 instead of a £3 EP. Therefore, the first thing I must say about ‘Look Out’ is that Joseph has not allowed his quality control to slip across the 11 songs featured. He has produced a very consistent album, with no weak songs.

Every song feels finished, cared for and lived in – as if these songs made it through copious gigs and Joseph knows them inside out. The production is warm and full, like Joseph’s voice itself. Unsurprisingly, the songs are formed around acoustic guitar and his voice, but other instrumentation (piano, strings, accordion) helps define each song in their own right. There are folk influences aplenty as well as touches of country but it never feels like genre-hopping – these are just tinges in each song to set them apart and without fail work within the overall sound.

I could throw the name ‘Damien Rice’ into this review (just did) and wrongly pigeonhole Joseph as a copycat. Sure, there are several songs featuring a female voice with a trademark Lisa Hannigan descant, so adored from ‘O’. But there are more differences to Mr Rice than similarities in Joseph’s work. He is a much less self-loathing, less cynical composer than Rice. Yes, he gives of himself, mostly writing in the first person, but it’s not a clichéd expose of a suffering artist. These songs are bittersweet, not bitter. There’s also a touch of David Gray at times though Joseph never veers into the pop beats that define Gray’s work. For me, the stand out track is ‘A Very Strange Thing’ and I feel the phrasing of the words is very ‘Gray’ but the music is not, with the accordion giving it an almost sea-shanty feel.

If you like this genre, ‘Look Out’ is money well spent. It’s an album for staying in on rainy days and letting the music warm you. One small criticism is that it is a bit too ‘safe’ at times, both in terms of the lyrical content and Joseph’s vocal delivery. That may seem contradictory, as I’ve praised him for not slavishly following the ‘Rice blueprint’. But, what I mean is there must be some times when he gets angry and he showcases both his normal singing voice and falsetto in such a seemingly effortless manner that I would love to hear him really let rip every now and then. Maybe that will happen on the follow-up album. I’ll be listening.