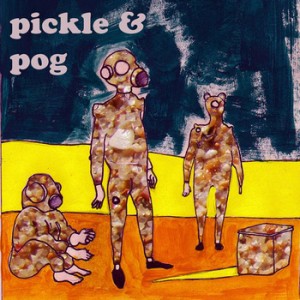 Chocolate Love Factory are a Belfast based four-piece with their hearts set on delivering riffs and energy by the bucket-load. With influences including Queens of the Stone Ages, Mars Volta and Tame Impala, anyone interested in heavy riffs, a good dose of adrenaline or a side of psychedelic would do well to check them out.

Pickle & POG is the band’s second EP, following 2012’s Octavia. With the first EP the band brought some heavy desert rock but on Pickle & POG the band leaps to another level. The production is much more polished and lively which is immediately apparent on first track, ‘Motivator’. The track kicks off with some big riffs and by the time the vocal screams come in the band is producing real energy. This song is the EP’s heavy hitter; it is immediately enjoyable and a hit in the making. ‘Townlands’ is in a similar vein; possessing a great hook with vocalist Rory Dee’s chorus of “You get away” sure to stick around in your head. ‘Pink Teddybear’ is another delight; two and a half minutes of art-rock octave riffs a la St. Vincent, Sabbath-esque grooves and the aggression of Nirvana.

But the band explore other avenues on Pickle & POG; ‘Green’ is much more varied with slower, quieter sections and the most progressive track on the EP. Each section of the song builds into a stunning outro with drums, bass and guitar ploughing along as Rory Dee showcases his vocal talents with falsetto clean vocals matched with more of his aggressive screams. ‘Burn’ is the quieter, acoustic laced effort but with plenty of atmosphere and drive.

Pickle & POG is a real gem of an effort. Fans of hard hitting rock such as QOTSA will love the adrenaline packed into these songs. Tracks such as ‘Burn’ showcase the musicianship in the band that allows them to diverge from straight up riffing. Here we get some more understated guitar work and lovely, soaring vocals. Chocolate Love Factory pack great songs and sounds into one EP, with a few more hooks like ‘Motivator’ the band could go places. Fans of heavy hitting music need to check Pickle & POG out as Chocolate Love Factory deliver some of the most invigorating rock coming out of Belfast.