Chris Keys – View From a Satellite 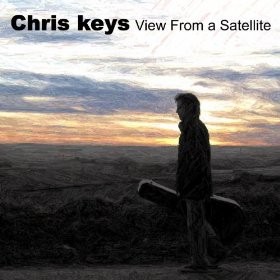 There is an absolute treasure trove of local and national talent who dominate the acoustic and folk genre. The list is endless really, each artist putting their own deft touch to a genre in the midst of a renaissance but for all the graft and toil of artists like Hudson Taylor, Tony Villiers, David C Clements and a good handful of stupidly talented other there is one young man who has swept in and stolen their limelight.

Chris Keys and his View from a Satellite EP will, without argument, make you stand up and take notice of a genre that some find tedious and tiresome despite the fact its home to names like Tome Odell, Passenger and Newtown Faulkner. An EP title much in the same vain as Passengers All the Little Lights, View from a Satellite gives nothing away but hints so subtly at the simplicity and beauty of the five, wonderfully composed, tracks that are to unfold.

Performed, produced and mastered almost entirely solo by Chris himself the EP is a testament to fresh and invigorating talent and a beacon of genius and creativity amongst the mirth of repetitive, auto-tuned synth-pop blasting out of earphones and speakers on a daily basis.  The EP as a whole makes for a great listen and the perfect soundtrack to a day when you are up before the sun and traipsing through the streets of Belfast in the bitter cold to the backdrop of commuter traffic.

Warming you up so gently with Under the Street Light reminded me of the heart-wrenching Hear You Me by Jimmy Eat World. Such a comparison in no way demeans Keys’ work but instead it’s an accolade in my view. The heart-beat drum rhythm and the swaying guitar make for an almost romantic acoustic composition. Lyrically it is just as romantic and heartfelt without being heady, filled with fresh sentiment and utterly devoid of jarring, cliché feeling, thank-fully.

Fix it Away is, by stark contrast a brilliant upbeat follow on to Under the Street Light. In the same vain as Hudson Taylor the toe-tapping tapping tune is enlivening and changes the pace of the EP. Hinting, in a sneaky fashion, at the diversity and range Keys is capable of. If there is one thing that is missing from the music scene it’s the harmonica. Bob Dylan has done it a great justice but very few others even attempt it which is why Chris Key’s gets extra brownie points. His inclusion of an extremely folk harmonica track on Broken World really grounds the EP in that genre of acoustic folk pop that has been made so popular by local talent like The Lowly Knights.

Halfway Home shows the depth of Keys vocal range, introducing the Dylan come Springsteen gruff vocal work, tinged with the Lightbody twang and all laced over an instrumental catches your attention without being demanding. Again, it’s softly romantic in aesthetic and that is one of the most endearing features of Keys EP. Along with his assortment of string instruments creates a delicate, organic thread that runs through the whole EP. A careful balance off gruff vocals and tinkling instruments, heart-pounding beats and slow melodies View from a Satellite makes for a soothing and easy listen.

Including a radio edit of Broken World the EP is, quite simply and, in my opinion, perfect. Promising and tantalising View from a Satellite is the beginning of a bright career for this young artist. All the comparisons and similarities you can make and hear in his music illustrate how in tune he is with the genre and style he emanates, being likened to artists such as Tom Odell or Snow Patrol give you a feel of his musical aesthetic and the acoustic roots of where he calls home. Truly inspired and at the same time unique there is no fault to be found in the talents of Chris Keys.

◀ STANDOUT ⁞ Under the Streetlight ▶
◀ SOUNDS LIKE ⁞ Tom Odell | The Lowly Knights ▶