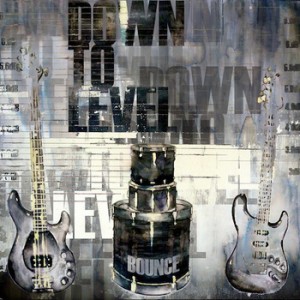 Back in February, Belfast’s Down To Level released their debut EP, Bounce. Since then they’ve been racking up their gig count and perfecting their sound. Their most recent single, “Chains on Me” combines heavy guitars with vocal performances reminiscent of Chris Cornell. Retrospectively speaking then, “Bounce” documents a band finding their feet.

A quick glance at the Down To Level Facebook page promises “Riffs you can dance too”. In the most concise way possible, that is Bounce. Packed with bluesy bass-lines and of course great riffs, the EP embodies the carefree hedonism of the party goer alongside the screw you attitude of a melodramatic teenager.

’15 minutes’ is the heaviest Bounce gets and is most reminiscent of the Down To Level we have today. Packed with attitude, an intricate solo and three part harmonies, the opening track is impressive for a bands first offering. While at points these harmonies don’t quite sync up as precisely as they could the germ of something special is there. The idealism of the good old fashioned rock star lifestyle collides with a determination to prove anyone who says it’s out of reach dead wrong. This is a solid rock song through and through.

If ’15 Minutes’ was the declarative finger up to any doubters, ‘As Fast As You Can’ is the action to reinforce it. With lyrical throwbacks to the EP title and later track of the same name, the continuity across the tracks is sophisticated, especially for a debut. It is not quite the rock-opera that is Green Day’s infamous American Idiot but sounds like a fully thought out body of work. ‘As Fast As You Can’ has a real blues- inspired feel with a driving guitar riff. If the harmonies were a little out in ’15 minutes’, Down To Level more than make up for it here. These harmonies bring a real lift to the song and make this track one you’ll be singing long after the EP has ended.

After the party of ‘As Fast As You Can’ we return to the middle finger in the air attitude that makes rock music so great. ‘Through It All’ is driven by embitterment as the song ends definitively with the explicit refrain; “I’m over you”. Once again, it has to be said, these guys weren’t lying about the riffs. The guitar intro is one any rocker would be proud of while the breakdown section is reminiscent of the early works Biffy Clyro.

Once again, continuity is of the highest order as title track ‘Bounce’ sounds like a reaction to the relationship gone sour in ‘Through It All’. We have already had the alcohol and fame; now we have the women. The rock star lifestyle is complete. While thematically this is a somewhat predictable move, the last original song can be forgiven due that funky bass line and tight song structure. The band finish with a cover of Maroon 5’s 2002 hit Harder to Breathe. While not much is changed structurally, Down To Level own the track, making it fit the EP comfortably.

Stephen Cassidy sings, “I’m never going to stop, until I reach the top” in ’15 minutes’. Listening back to Bounce with their latest single ‘Chains On Me’ in mind, we can be assured that this is a band of their word. And rightly so, they have the promise, the determination and the music to back them up.

Venus Effect – ‘It Would Be You’