by Hannah Tracey
in Music Reviews 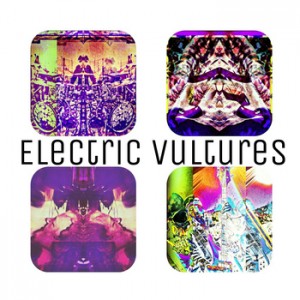 It’s not often you’ll hear an already mature and confident sound in a newcomer record such as that oozing from Electric Vultures‘ debut EP, released in August 2014. The Ballymoney 4 piece have described themselves as a band ‘that are not confined by any one genre of music’, which certainly shows in this record with its varied pace and tone. This may sound like the band doesn’t have a particular direction, but a solid rock ‘n’ roll funk lays the foundation for the Electric Vultures sound. With such strong rock ‘n’ roll roots the tracks on the EP work well together, maintaining a unified sound as they weave through funky grooves and classic rock beats. Electric Vultures may not be confined by any one genre, but they’ve certainly got that classic rock flair and confidence.

Opening track ‘Mean Hearted’ kicks off with a flirty, funky riff echoing that of Hendrix. It’s an instant foot-tapper and the funk works well against the honest, no-frills rock ‘n’ roll vocals. The lyrics are standard and ‘classic rock’-esque, chiming in on the heartaches of having a ‘mean hearted’ woman: “You ain’t no little angel, you’ve got the devil in you” – but the focus in this track is really on the confident, raw guitar riffs and licks. A nod to the sounds of the ’60s comes in the form of hazy organ and a warpy guitar solo, bringing The Doors to mind. ‘Mean Hearted’ builds up to a heavy, full-bodied finish and is an extremely impressive opening track for this debut EP.

The funk continues into the second track ‘S.O.L’. It’s clear that Electric Vultures know their musical stuff; each instrument compliments the other and the track’s syncopated rhythms give a quirky attitude to the song. The lyrics are fun and original, and again the no-frills vocals give a mature, confident edge to the sound. The chorus is catchy and integrates well: “Find a beat that’ll make it feel alright, makin’ moves in the dark ’til the mornin’ light”. With its bluesy, heavy guitar solo and a fantastic injection of sheer bass funk at 2:50, ‘S.O.L’ will certainly have you makin’ moves.

‘Bright Lights’ is an original rock ‘n’ roll track with good riffage and a great guitar solo – again complimented by fuzzy organ sounds and a drumbeat with attitude. The vocals are more bluesy here too, and give the track an overall blues feel. The fourth track ‘Where I Belong’ has the same bluesy movements, but with a slower beat and slower grooves. The riff is strong and recognisable throughout the track and, against the ethereal organ effects, it’s easy to picture yourself sipping whiskey in the corner of a smoky blues bar enjoying this tune. The guitar solo is gorgeous and emotive and the raw, almost sleazy warbling effects are well-integrated with the bluesy progressions which are in themselves a delight. This track is testament to Electric Vultures’ capabilities and promises a great future for the four piece. Following this is a short, light-hearted instrumental ‘Kyaneous’ which showcases the band’s acoustic sound. It’s a pleasant interlude after the heaviness of the previous tracks and leads nicely into the EP’s final track ‘Lies’ – a definite stand-out track.

‘Lies’ opens with raw vocals and more melodic guitars; an almost Latin-esque drum beat starts at 00:50 – all these elements put a more chilled slant on the EP’s rock sound. The track is indeed chilled but moody, and Cochrane’s vocals fit this description too. As the track progresses so does the volume; it crescendos into fantastic harmonies and another emotive solo. The track’s softer beginning and build-up to a heavier finish brings The Frames to mind here – like Glen Hansard, Cochrane saves a lot of soul for the dénouement of these tracks.

With impressive first and final tracks and all the rock ‘n’ roll goodness in between, Electric Vultures’ debut EP has paved the way for undoubtedly greater things in the band’s future.

All Of Your Ruins – ‘Into Oblivion’