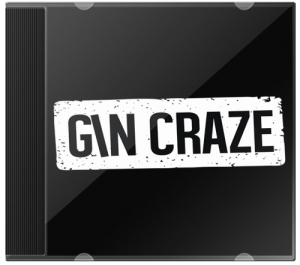 Gin Craze admit their main influence are the Red Hot Chili Peppers and it’d be foolish to deny as their fingerprints are all over this introductory EP. Thankfully, Gin Craze’s sound is mined from what I class as the best RHCP era, namely the ‘Mother’s Milk’/’Blood, Sugar, Sex, Magic’albums, especially in the first 3 songs with perhaps only the EP finale straying toward their more recent efforts.. The raw live feel of the EP certainly captures the punk enthusiasm of Anthony Kiedis and his men at their best and the band also exhibit a real genuine understanding of the funk side of their heroes throughout.

‘Drive’ kicks us off at a startling pace with insistent bass and screaming vocals to the fore. Clocking in at 2:12 it’s a nice punchy introduction to the boys. ‘Fighter’ keeps the raucous feel and I’m guessing both songs are popular live for those who like their rock short n snappy. ‘I Can’t’ is next and is my favourite song on the EP. It accentuates the funk side of the band more than its predecessors, sounding like a theme-tune to a 70’s blaxploitation movie, and proving they genuinely have a feel for that genre. It’s also the catchiest of their songs, the one I remember most afterwards. ‘Shore’ is a slight departure; a longer, more ambitious song, not unlike some of the latest more-melodic Red Hot Chili Peppers and with echoes of INXS in there as well. It doesn’t always convince in terms of melody and coherence but it does show they are not all about the punk of the first two tunes.

As an introductory E.P. this does exactly what it’s supposed to. It gives us a feel for the band’s influences and shows that they can genuinely play. The performances are good throughout, especially the rhythm section of Gordon & Clarke, given how hard it is to live up to Flea & Smith. Broad has the guitar licks and a feel for his craft. In Horner, Gin Craze have a vocalist with a lot of potential given the EP showcases his ability to sing, scream and rap. He certainly holds a tune much better than Keidis, has much better tone and his Jim Morrison-like screams are impressive. He needs to work on his control in terms of tuning and, while I am not the best judge of rap, I reckon a bit more work needs done on this aspect to really convince but the potential is definitely there.

But this IS only an introduction and it’d be wrong and unhelpful to go overboard with praise or criticism at this point. Being good at sounding like their heroes is one thing, but defining who Gin Craze are is another. I think their next steps should be to define their own sound and image, separate from their idols. I feel that some of the Americanisms and slang in their songs sound a little contrived for a band from here and I think it’s important they don’t fall into the trap of writing songs they think Red Hot Chili Peppers would write instead of telling their own tales in their own way.