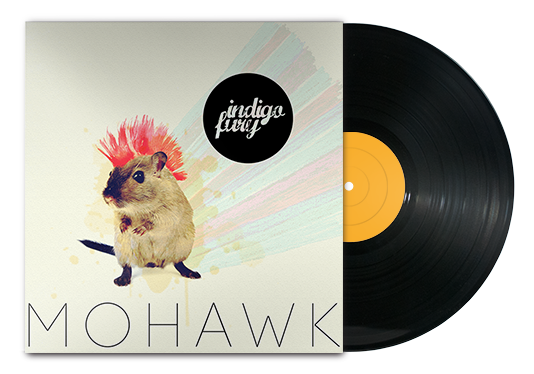 ❝ Belfast alt rocker’s Indigo Fury were formed way back in 1996 by Sixties super fan vocalist Rory Lavelle. Back then, they were just another covers band, performing in biker bars and being ably assisted by Rory’s boss at the time, biker artist Benny McCaffery. Over the next fifteen years the band dropped the covers angle and began writing original material, endured a few lineup changes, self-released a couple of singles and EP’s, and finally released their debut album in June 2011 (‘Drive’).

Arriving back in the present day, we find a new EP release to salivate over: the four track ‘Mohawk’, self-released in June this year (astonishingly true; the band is STILL unsigned!).  The EP begins with a snarl of guitars, riffs and harmonies, in the shape of opening song Boddicker. Lavelle’s love of the Sixties is still evident here; this has a distinctive Sixties flavour in the harmonising in particular, combined with a guitar-led driving beat. A sort of ‘Byrds meets QOTSA’ mix, if you will.

Case Adjourned has a slightly different vibe as its quirky beats and sardonic lyrics give it a Hives-esque sound. Those great harmonies are still present, but Lavelle’s vocal range is well showcased too, along with the strong, decisive drumming style of sticksman James Nicholl. This is radio-friendly rock but with a ballsiness that gives it a bit of an edge.

The classic rock influence shines through on track three, the EP’s title track. Its deceptive operatic intro seques rapidly into a marching, driving beat, similar in sound to Pink Floyd’s ‘Money’. The psychedelic guitar solo also throws a nod in this direction. The vocals also really stand out here; indeed, Lavelle has the ideal alt rock voice, with its imperfections and captivating resonance. This catchy number is definitely the highlight of the EP.

Finally Scarf Face shows off the by now signature IF sound: quirky time signatures, a Sixties influence (The Kinks this time), and a catchy beat. They lyrics here are more silly than sarcastic (“hubble bubble toil and trouble” anyone?), and the whole song resonates with that ‘classic rock with a modern twist’ vibe. There are shades of Led Zep and even T-Rex here, all wrapped up in IF’s clear love of ‘alternative riff-rock’ (to quote their Facebook).

Indigo Fury’s journey from covers band to alt rock cult figures has been long, tireless and occasionally arduous. Unlike today’s trend of throwaway, instant fame, this ‘rocky road’ often creates artists that are tenacious and genuinely talented. That certainly seems to be the case here: IF’s music is boisterous, organic and hugely fun (remember ‘fun’ music?). Put simply, these guys will rock your socks off and put a smile on your dial – which is surely what music is all about.❞

Aggressors B.C – The Tone Of The Times