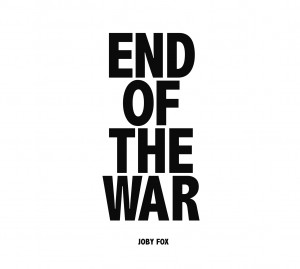 ‘End of the War’ is a fine example of the singer/songwriter genre and more besides. The music itself is beautifully crafted and expertly produced. The production is crisp and clear with the mix between the instruments and Fox’s raspy ‘lived in’ voice is perfect. The album opens with a lilting simple contemporary folk song ‘Insane Asylum’, and has a lullaby feel to it despite the title. The next ‘proper’ song is ‘R and L’ (Republicans and Loyalists). This is the stand out track on the album featuring a backing track akin to ‘Thank You’ by Dido, a vocal delivery straight from the Fran Healey (Travis) school and a backing vocal that echoes Floyd’s ‘Great Gig In The Sky’. Sound like a strange mixture? It totally works. People are as divided about whether we should sing/write about the Troubles now as the division between ‘R and L’ itself, but this is not a song that goes over old ground or picks sides. It’s personal.

Next up is a simple love song, simply called ‘I Love You’. Simple yes, but very effective and, should it ever get the airing it deserves, it will become ‘Our Tune’ for any number of couples, no doubt with the bloke recalling how he finally got up the courage to ‘pop the question’. Again, you have to love the ‘Ulster-ness’ of it as Fox says ‘courting’ (curtin’) in the lyric. Fair play lad.
The album closes with the title track. This is a more ambitious jazz-infused track featuring a full band sound, including sax and organ. Being a Belfast boy we think Van The Man, but we could equally think Ray Lamontagne in his jazzier moments. It’s groovy and really well executed. I have to say, it caught me out after what had gone before but my surprise gave way to enjoyment.

My only criticism would be that there isn’t enough! 7 tracks with only 4 genuine songs interspersed with instrumental interludes seems a tad short. Temper this though with the fact that this is a dual project to be accompanied by a short film, ‘Los Commandos’, which Fox has ambitiously put together. If the film is as good as the album, the whole package will be very good indeed.