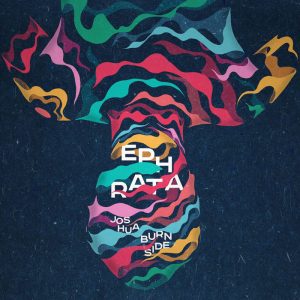 The path of the odd single, an EP or two and then the inevitable anticipation for the debut album is a well worn one. Any potential and promise can soon be found out with the bigger canvas of a full length release. For the truly prolific songwriter, the album is something to be relished not feared. Step forward Joshua Burnside and his debut album, ‘Ephrata‘.

The Co. Down songwriter put out his last EP back in 2013, but the likes of ‘Black Dog Sin’ still reverberate around the Northern Irish scene, received and sung back with gusto at many a gig. Catch any Burnside live show in the past few years and you’ll have a noticed a string of new material. Joshua Burnside and the album format were sure to go hand in hand.

‘Ephrata’ draws inspiration from a wide pool of sources, both musical and lyrical, with Burnside fully embracing the increased scope and possibilities of the album format. On ‘Ephrata’, named after a small town in Pennsylvania, Burnside has taken his music miles away from his hometown of Comber. Inspired time spent travelling in Colombia permeated his recording process, with South American influences.

Even in the space of the first three or four tracks, Burnside covers considerable musical ground. ‘Blood Drive’ features Burnside’s typically intricate finger picking. One of the quieter tracks, its softer nature has hints of Bon Iver in its modulating vocal backing. Its simple refrain and soothing nature is a gentle opener but Burnside throws that atmosphere out the window on next track ‘Tunnels Pt. 2’. It’s a real jolt of electricity. The track’s pushing beat and urgent guitars are big enough but in true Joshua Burnside fashion there’s far more to it. The song’s first two minutes build into a whir of backing vocals, organs and brass amidst the theme of biology and technology. The latter half slows down in tempo but rises to a closing crescendo.

The talented Alana Henderson makes a number of appearances, most notably on ‘Holllogram’, a gorgeous duet of past love with the pair’s voices entwining beautifully on one of the album’s memorable lyrics. “I don’t care what they say, if I have to dance alone I will”.

One thing that has remained a constant in Joshua Burnside’s songwriting is his ability to weave a good story. ’26th Street’ tells the story of the murder of Colombian activist Jaime Garzón while slow burning closer ‘The Good Word’ sees a professor consider religion to a chorus of “glory hallelujah”.

Title track ‘Ephrata’ is a vivid account of a night spent in the Pennsylvania town whence the album came. A night spent in unfamiliar surroundings as the local market burns down produces one of the stand-out moments on the album, and is a shining example of the album’s incredible production. Sampled sounds, trumpets, strings, keyboards, diverse percussion; you name it. The diversity in instrumentation is a constant thread throughout ‘Ephrata’, allowing Burnside to truly explore his experimental folk sound and bring in his plethora of influences.

‘Ephrata’ is by far Joshua Burnside’s most ambitious release yet. It is equal parts dynamic and wide ranging in scope but stands as a complete and focused work. There’s scarcely a weak track here and amongst the highlights are songs that will merit a play for years to come. The end result is a triumph for the deservedly heralded Northern Irish songwriter.