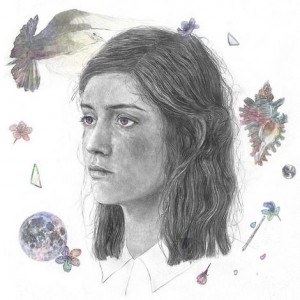 Say It is the debut album from indie-pop band Just Handshakes. The band formed at Leeds University under the rather more twee Just Handshakes (We’re British).

The album opens with the bitter-sweet single ‘London Bound’. Clara Patrick’s distinctively sweet, adolescent vocals deliver the refrain “Can we walk the long way home / I don’t want to be alone.” The song suggests post-university separations, with all their friends “London Bound”. The sound here is very 80s indie with a heady mix of jangly guitar and reverb laden synth. This is one of the strongest tracks on the album and the next few tracks follow on the same lines.

The quiet keyboard verses of ‘Bright Lights’ burst into a simple but catch chorus. As does ‘November’ though the catchy melody here comes from the 80s sounding instruments. The bouncier tracks on the album include ‘Say It’ with one the most direct sounding guitar riffs on the album and the more driven ‘Dead and Alive’. The album ends with a departure from the album’s tempos, the melancholic synth and vocals of ‘Balmoral’.

Just Handshakes take their main inspiration from C86, the 1986 compilation released by NME. Listening to the jangly guitars, synth and keyboards and power-pop choruses here it’s not hard to hear the similarities. Other sounds are reminiscent of The Cure, The Smiths and maybe some dream-pop. Just Handshakes have taken these indie-pop hallmarks and made them their own. Clara’s distinct vocals seem to simultaneously blend and rise above the chorus and reverb laden textures created by the rest of the band.

The band’s sound is pure 80s indie pop but sadly it doesn’t trek too far away from this texture with only the closer ‘Balmoral’ departing from the formula. There’s enough delightful tracks and texture to make this a great album however and it would be great to hear where they go from here.