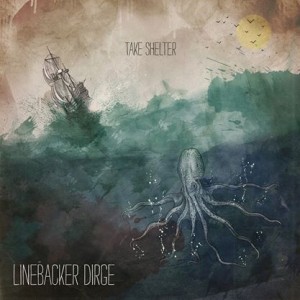 Belfast’s Linebacker Dirge follow up 2011’s well-received There Are No Clean Getaways EP with Take Shelter, a self-produced album that boasts not only a hard-won DIY ethic, but a line-up including members of local luminaries A Northern Light and Kasper Rosa. Eschewing any production sheen, Take Shelter effectively transports the listener to the band’s practise room: ‘in your face’ is admittedly a somewhat lazy journalistic description, but it’s the over-riding atmosphere conveyed by an album that invites you in with the stuttering rhythms of ‘Four Ignoble Truths’, and lyrics asserting “we’ll weather this storm together” then spends 55 minutes demonstrating the myriad ways the band have to disorientate your emotional equilibrium.

‘Hitchhikers May Be Escaping Inmates’ provides an effective blueprint for the band, progressing from angular guitar twang to a lilting string coda, which is followed by the vaguely space-rock intro of ‘[words are missing]’, where anguished vocals are the only thing preventing the listener drifting along, until things are shaken by a sudden burst of At The Drive In-style stuttering rock which gives way to something gentler. Taken together as an opening triumvirate, it’s hard to argue that these 3 songs leave any doubt as to the band’s intent to jar the listener as much as they jar themselves.

Establishing an atmosphere is paramount, but in coming out strong, there’s a danger that you run out of steam too early. However, there’s a grasp of dynamics evident throughout the album that staves away any mid-range doldrums. For a band wearing emo influences on their sleeve – and make no mistake, this is an ’emo’ record, in the less mass-media friendly sense of the word – Linebacker Dirge understand that ebb and flow is the key: ‘Blood Bruise’ alternately throbs, pulses and gushes with cardiac intensity, whilst the imploring vocal desperation evident in ‘Fall Of The Armada’ transmutes the words “Leviathan rises” into something primally relatable.

It’s arguably the ability to relate to – even empathise with- a band in this genre that allows them to stand or fall: authenticity is key, and while it can often be a difficult factor to pin down – often more noticeable by it’s absence – when it’s there, it’s something you tend to ‘just know’. Whilst there are discernible influences at work throughout this album, including At The Drive In, hints of The Jesus Lizard and the angular twists of These Arms Are Snakes, it’s no small feat that Take Shelter brings you on its own journey. The gentle acoustic picking of ‘The Great Northern’ pulls of the feat of making the line “I knew this girl just like you but she died” work without satire or reproach, and the subtle, unplanned tempo change that occurs as Ian McHugh’s vocals begin to snarl provides a left-field high point of the record as it does: this is the sound of music intrinsically linked to an emotional state.

To resonate on such a level is a double-edged sword: the album is not a pleasant listen, but a rewarding one – lyrically and musically sharp, and strangely inclusive in a genre that often alienates through either accident or design. There’s warmth to be found within, but it takes a few listens to reveal itself, and my jury’s still out on whether the anguish wins. Most importantly, in a climate where ’emo’ has filtered through into mass media, Take Shelter provides an effective reminder of the roots of the form.