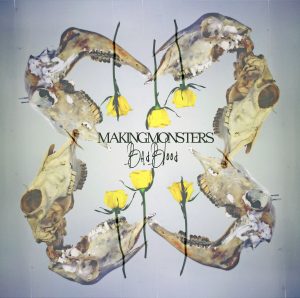 Derry’s Making Monsters are something of a rarity on these shores: a raucous rock n roll band fronted by a young woman with a gloriously raucous rock n roll voice. The band formed in 2011, releasing an EP in June 2012 followed by EP Attention in 2014, featuring single ‘Nosebleed’ which gained both local and national attention. Bad Blood, their third EP, is due for release on May 13th but it’s already making waves, with single ‘Better’ featuring not once, but twice, on Daniel Carter’s Radio 1 Rock Show. The band are also planning an all-Ireland tour for the EP, including a launch night gig in their home town.

Bad Blood consists of six songs, making it almost a mini album rather than an EP. It opens with the bracing sonic blast of the title track, all snarling guitars and jangling riffs. Vocalist Emma Gallagher wastes no time in unleashing her versatile voice, which is both ballsy and seductive here – in fact, that’s as good a description of the song itself as any.

In ‘Call Me Out’ we hear her clean vocals, which are frankly gorgeous, bursting with emotion and class, before she fires out her signature scream, which is rather reminiscent of Marmozets’ Becca McIntyre’s. ‘Better’ follows; it’s the song on the EP that best displays Gallagher’s vocal range, as well as the band’s similarity to the aforementioned Marmozets, or even Biffy Clyro. It’s catchy pace also makes it the ideal lead single.

The slinky riffs and jaunty beat of ‘We Aren’t Living’ is next, followed by the skittish and bittersweet ‘Rose’: at almost four minutes in length it’s the longest track in amongst the other short, sharp bursts of music on the EP.

As so often happens, the best has been left to last: the peculiarly named ‘Noodle Sync’ is a pure shot of balls out heavy rock – nothing alt, indie or enigmatic in the slightest here! Gallagher’s scream is in full force, superbly backed by a band apparently attacking their instruments with unfettered glee. It’s an absolute belter of a track, and a hell of a finish to the EP, guaranteed to paste a huge grin on the listener’s face.

Making Monsters are one of those bands that – like Marmozets, or Rolo Tomassi – seem innocuous, even cute, simply because they happen to have a pretty young woman as their vocalist. Never, ever let that fool you, however: once they open their mouths, they will blow you – and your conclusions – away with their talent and ferocity. Making Monsters in that sense are, quite simply, trailblazers.