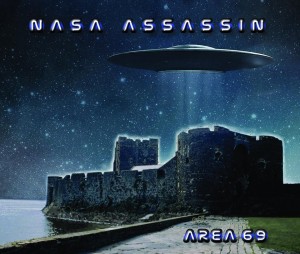 Regular readers will know I tend to wax lyrical about the amount of talent to be found in our wee country. I make no apologies for this. For me, as someone who’s been about a wee while and seen various periods of feast and famine in terms of local talent, I have to say the most pleasing thing about the current music scene in N.I. is the breadth of music that is covered. Even if you only take Rock music, there is a myriad different sub-genres more than adequately covered. Perhaps 25 years ago there would have been a glut of  ‘Hair Metal’ to a greater or lesser degree, today there is real diversity. I think that is healthy. I think that helps promote cooperation between bands instead of a cut-throat attitude. We are too small a country to have rival factions and to have audiences split.

A band that for me highlights the healthy diversity of the local scene is Nasa Assassin. It is a band that is the very epitome of diversity; that is hard to pigeonhole (other than its own ‘Psychadelic Pronk’ label) or pin down to any genre in particular. Yes, there are recognisable influences aplenty, but as with all new music, it is not the originality of the music that really matters but how influences are blended to form something new that is worth listening to. Nasa Assassin has achieved that. ‘Area 69’ is an album that is engaging and enjoyable from the off and maintains interest with prolonged listens.

So, what are those influences I talked about? Well, album opener and ‘theme tune’, ‘Nasa Assassin’, reminds me of ‘Introduce Yourself’ era Faith No More, especially the drums and bass, which are pure Bordin/Gould. Faith No More is the band I would keep coming back to throughout the album in terms of influence, with ‘Sexy Nervous Breakdown’, ‘White Panacea’, ‘Mystified’, ‘Road To Forever’, ‘Twitch In The Kitchen’, and the immense ‘Super Collider’ all exhibiting that wonderful fusion of Metal, Funk and Rap that Faith No More did so well. There’s also a feeling of the wonderful anarchy R.H.C.P. used to have in their ‘Blood, Sugar, Sex, Magick’ era.

However, on other songs, such as the wonderfully groovy ‘Nasa City Rockers’, the brutally irreverent ‘One Man Crime Wave’ and the anthemic ‘Not Givin’ Up Livin’ (To Live)’, the 5 lads from Greater Belfast display their Punk credentials. ‘Nasa City…’ is pure New Wave Punk a la Iggy and The Stooges, with a groove and chorus that just permeates the brain from the off and has you humming it for days (or screaming it at the top of your lungs in the car – yes that was me you saw). ‘One Man…’ may start off all space age, but soon degenerates into a bawdy tale of another day in Carrick (according to vocalist, The Watcher), full of Punk piss and vinegar. ‘Not Givin’ Up….’ is fast ‘n’ furious, driven by insistent bass playing, hectic guitar riffing and the once-heard-never-forgotten chorus. Mesmerizing stuff.

It’s all very well having these influences, but the trick is to use them in the correct way; to write good songs, instead of aping existing songs. Nasa Assassin do this, and this is largely down to The Watcher. His ability to handle Rock, Rap and Punk vocals is very impressive. His voice is not the best you’ll ever hear at any of those three styles, but it is more than good enough to convince at all three. Also, his ability to sing about his own environment, albeit in a slightly tongue-in-cheek-not-quite-flattering way, gives the songs personality, and indeed is what gives Nasa Assassin its distinctive image. Hell, he rhymes ‘Carrickfergus’ with ‘nervous’, what’s not to like about that? Add to this, interesting ideas such as using a Lambeg drum style intro to ‘Mystified’ and the general invention displayed by the guitarists throughout, shows a very talented band at work. They may not take themselves too seriously, but it doesn’t mean they are not seriously good musicians.

Is it a perfect album? No. I think it’s very difficult to be as experimental/off-the-wall as Nasa Assassin is, and get it spot on every single time. Also, although the album is well enough produced, there are times it could do with a little more bite in the guitars and The Watcher a little higher in the mix, given that vocally his voice is not naturally powerful. Having recently heard the band live, and heard how powerful they sounded, the album does not fully capture that. But those are very marginal issues that in no way would stop anyone from enjoying this album.

Nasa Assassin is a band that has kept going, kept believing in its music and its image. It is great that it has finally got its music released in album format. We should all get behind it, give it the nudge it needs. Also, check them out live, they are ferociously good.