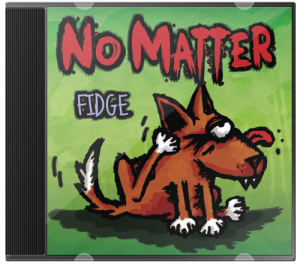 The Fidge EP is the new release from Belfast pop punk trio No Matter. The band were formed in 2010 out of the remains of local acts such as The Lobotomies, Numskull, Leap for Lenin and The Dangerfields. Track one ‘Hateful’ immediately grabs your attention with fast paced spiky guitars and angst ridden lyrics, it will bring you back to Dookie era Green Day with a bit of NOFX thrown into the mix.

Throughout the 5 track EP vocal duties are both male and female shared between ‘Catface’ and ‘Dan Bastard’, with Dan’s vocals standing out and being more powerful. Fourth track “Dirty Little Lies” catches the attention with dual vocals, good structure and a potent series of riffs at the 1 minute 43 second mark. At times it seems that the production disappoints with Catface’s vocals fading into the background and the drums could be more pronounced.

The blue print of Green Day, NOFX and the Ramones has been laid down and isn’t strayed from. Let’s not beat about the bush here, you’re not going to be struck by originality but it’s what you’d want from a pop punk band? It’s short, catchy, fun, inoffensive and will put a smile on your face. After two listens you’ll find yourself singing along enjoying the songs. The songs do however seem to lack a little oomph.

Overall the EP lays the foundations for a band that has the potential to be pretty good. With a bit more work, guidance and cleaner production this band could release a set of excellent pop punk songs. I’m left wanting more, the EP is a touch on the short side with only two tracks getting over the 2 and half minute mark, I’m just not sure if it’s more of No Matter I want.