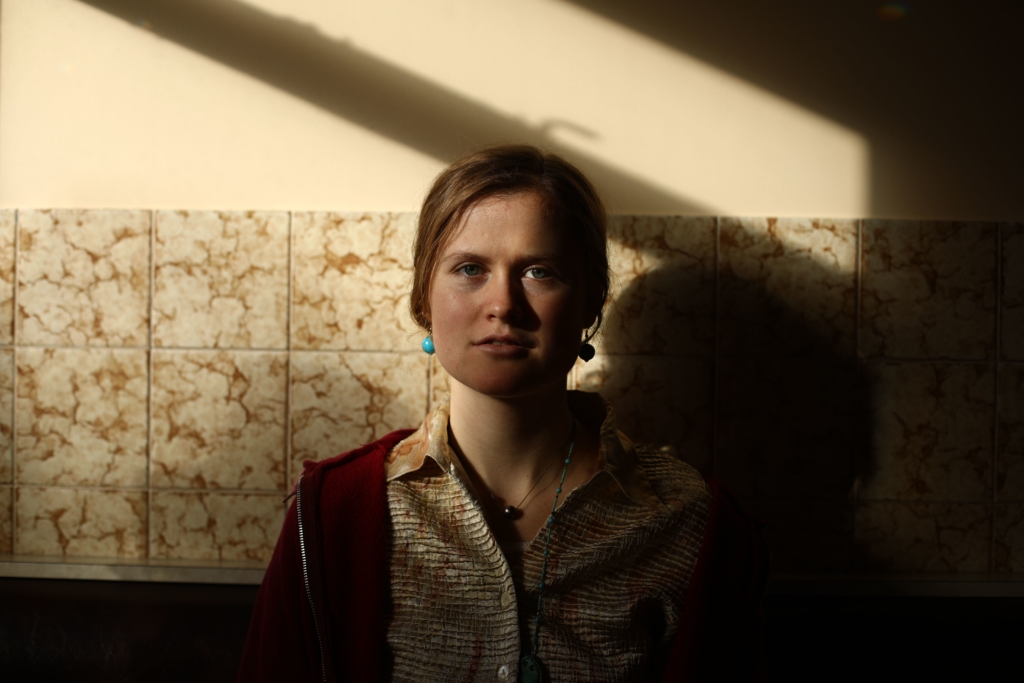 Derry should consider itself rather lucky to be the credited home of experimental soul music artist Queen Bonobo, or, as she is more casually known, Maya Goldblum. She is quite the worldwide artist; currently basing herself in Idaho for the winter months, moving back to Europe for spring, like some kind of percussive Persephone.

Derry is warm, Goldblum notes, in all but meteorology, warm and welcoming, exuding art in every direction. It is a perfect test patch for amateur musicians, a place where there is range and diversity and a rich scope for imagination; for both those based there and those from out of town.

Goldblum’s own imagination is shaped constantly by her changing conditions, but have been rooted in a healthy diet of the likes of Billie Holiday, Nina Simone and Joni Mitchell since early childhood with a mesh of the more contemporary Unknown Mortal Orchestra, Andrew Bird and Little Dragon filling her adolescent ipod classic. “I tend towards piercing, soulful voices, unusual and thought provoking lyrics, music that makes me shudder in awe and question my existence” she says as Goldblum; but one could argue that as Queen Bonobo, she fulfills her own desire.

Queen Bonobo released her debut album ‘Light Shadow Boom Boom’ in May last year (2019); a 10 track extravaganza which fluxuates between an instructing and asking permission of its audience. Each song is a self identifier, her own ten commandments; I am this, I am this, I am this, she speaks and they are all truths. To set an overarching narrative to the album seems almost sacrilege to a collection which contains many whole and different worlds into a 41 minute listening experience. But these worlds are clearly bookended, track one (The Lord Does What He Wants) is lyrically candid, personal and meta in its confessions “I wrote this stupid song for a time I feel out of place” and “break these bones so I remember nothing is permanent”, setting a precedent for the entire album with “we’re all dsyfunctional and i’m done trying to be like anyone else”.

With this Shakespearean introductive summary, the rest of the tracks follow naturally on, culminating with Noise which concludes “Listen to the noise / wade through the dirt / listen to your noise” as an altar call outro to musicians and artists alike. If musical worlds can end they are indeed cut short with the ending of these tracks; they are alive and then gone, just as jazz tradition intended.

What remains in the contents of LSBB are two main streams of song; those which are more jazz based and those which are more percussive based. What becomes apparent early on is these songs are written for and in different locations. Vintage Gauda (track two) and Shadow (track nine) are coastal based and as Bonobo sings about the ocean, you can hear the seashells and lapping waves, almost feel the gentle breeze – the former begins a transcendental theme which weaves throughout (“you may as well die happy / let go of your body, your mind is already gone”) whilst the latter, more piano dominated, building to the horn section sings the lament of a return “I’m walking from the mountains to the seaside” / “reality far removed from ideal – I am strong, alive and I am by my side”.

Light me up (track three) is the first song on the tracklist to bring home the jazzy edge; it opens, immediately more bassy, darker as the keys come in, dissonant vocals instructing or perhaps asking permission to “break some rules while you’re still young / there’s so much soul left to burn”. If she is the light that burns, she resolves yet again later in the album, with a foiling 8th track. Watching Over You transcends ideas of breaking rules in favour of making your own with a hint of country twang and a nod to southern root influence; it is gentle and cheery, watching the rest of the world burn whilst Bonobo is “just sitting here on my rooftop”. This track feels like a comfortable sidelining before the resolving and somewhat sloping return of Shadow. Its expression as observationalist is portrayed in the music with pauses and changes within the tempo and rhythm. Boom Boom (track five) acts as a percussive buffer, resetting pace midway through the album with open acapella reminiscent of the vocals of Yael Naim. If intermissions exist on albums, it lies here, in the shortest track on the record, its tone one of ethereal worship “share your sound / I’ll follow your temple”.

The most standout tracks of the album remain the more sensual jazz numbers. Honey (track four) debuted as single at the end of summer 2018 and its lo-fi jazz style builds to an adding of instrumentals from a drum solo to keys like adding ingredients to a recipe. It feels easy, not overdone as she “drapes my limbs around this empty room”. The singing space pulls away from the smokey cathedral of house jazz so that Bonobo breathes fresh air and exudes light, honey-coloured stank. MFGB answers this call as well, revealing more upbeat and synthy sounds which move and dance, breaking down to change direction again. This song like its lyrics suggest is “charming” and “not easily captured”. At her best, Queen Bonobo holds you at an arms’ length, gasping a little for the next hit.

It is in Spin Me (track seven) where the musical interludes say more than the lyrics. Queen Bonobo uses woodwind here, setting her own pace as one the listener follows, instinctive and aural. She does not dub this album particularly as a jazz record. Whilst some of LSBB was recorded live, overdubbing and separation techniques were used to split hairs and filter out mistakes. Bonobo, grateful for this experience of recording and producing, now knows what she wants and what she dares not repeat. Weary of such careful cultivation, Bonobo implores “in my most recent recording session, we took a more classic jazz approach; six of us recorded three tracks live in one day. I feel this is the most effective way to capture improvised music and remain true to the energy and power created in a live setting”.

In terms of promoting a more local jazz scene, Queen Bonobo considers “the best thing to have more venues open to new and experimental ideas or more inclusion amongst the mainstream music collectives to involve jazz related artists in their line ups.” What sticks out in Irish jazz is “many artists have enough other genres mingling with their jazz influence to bridge the gap between jazz and pop that can be so alienating.” She says “I have plenty of jazz influence, but my favourite local artists are the likes of Junior Brother, Foreign Owl, Joshua Burnside, Comrade Hat, James Anderson and Neptune M.” Queen Bonobo, it seems, is no purest, she is an artist.

If you’re interested in checking out a bit of local jazz, The Empire host a weekly jazz and blues night on Thursdays from 10:30pm