Selene – Among the Frozen 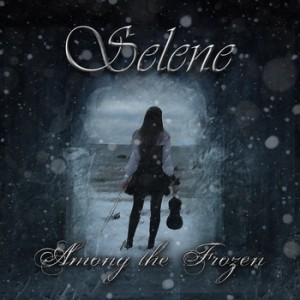 Northern Ireland isn’t exactly the first place that springs to mind when one thinks of symphonic metal. The likes of Tarja, Nightwish et al hail from far more exotic climes that good old Norn Iron. So bravo to L’Derry’s Selene for tackling this challenging genre.

The band are still very much in their infancy, having only formed earlier this year. The founding duo of vocalist Shonagh Lyons and instrumentalist/vocalist John Connor met when the former guest vocalled on the latter’s project Gate XIII. They obviously gelled as an EP has already been recorded and released (‘Among the Frozen’, in July of this year). Two singles have so far been released, ‘End of It All’ and most recently ‘Ghost’, complete with lyric video.
The pair have recently added a third member to their lineup in the shape of bassist Thomas Alford, just in time for their first major gig: a headlining turn at Culturetech in L’Derry in September, with string quartet ‘Scala Strings’. Talk about jumping in at the deep end!

The EP opens in confident fashion with ‘Piece of Mind’, which immediately launches into symphonic pomp. After a long intro which brings to mind Nightwishes ‘Imaginaerum’ we are introduced to Lyons’ vocals. Her classically trained soprano voice is lovely and mellifluous…but sadly it is partially obscured by the instruments, particularly the piano.
This problem continues in ‘Til the Shadows’. The song contains some great gnarly-snarly guitars and claustrophobic lyrics, as well as an admirable NWOBHM-influenced guitar solo, but the vocals thing…is it a production issue, or is Lyons holding back? As it stands, it gives a tantalising glimpse into her potential but stops frustratingly short of displaying it fully.

Lead single ‘End Of It All’ continues the trend too, this time with an Evanescence sound and dual vocals. Lyons’ voice is thin in places, but it’s positively colossal compared to her co-vocalist here; John Connor may be quite the virtuoso instrumentally but sadly his voice is simply not up to the challenge (especially beside a classically trained singer!).
Luckily the next song (‘Ghost’) sees Lyons finally displaying her abilities (hooray!). Accompanied by a simple piano melody and occasionally a violin, this is hauntingly beautiful. With image-laden lyrics such as “porcelain hearts never beat” and Lyons’ voice really soaring, this is the definite highlight of the EP.

Giving Mr. Connor his turn to shine is instrumental track ‘The Codex’. From its riff-laden intro and chugging beat, this may be a trifle self-indulgent but it’s a great listen. The Iron Maiden-esque squealing guitar weaving through the song is a particular treat. Be warned, though: the ending is VERY abrupt, which may catch some of you air-guitarists unawares!
‘Rain’ wraps up the EP, in similar fashion to its beginning. The addition of a sinuous, almost sitar sounding intro adds an intriguing touch…but again, the vocals are too quiet, only being bolstered by some lovely harmonies. The overriding melancholic theme also continues (“the rain falling takes what is left inside of me”).

It will be interesting to see how Ms. Lyons’ voice stands up at their Culturetech gig next month. One hopes that the vocal audibility issues on this EP are down to production, and her talent will really shine once she is on-stage. Otherwise Northern Ireland’s venture into symphonic metal may simply fade away…

Dog Will Hunt – The Colours