The Steve Experiment – Life Is

by Anna Cafolla
in Music Reviews 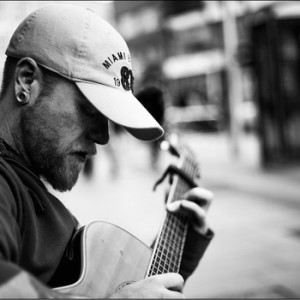 If you’re a regular shopper, socialiser or street walker in Belfast you’re sure to have noticed Stephen Catherwood, otherwise known as The Steve Experiment. Stephen is a street performer and a self taught guitarist based in Northern Ireland. I’ve caught his sheer awesomeness on jaunts to Castle Court as well as in Voodoo during Open Mic Night (a must for everyone going out in Belfast). The release of his new album is therefore quite exciting for me.

‘Life Is…’ is a sixteen track LP; a rollercoaster that brings us loop-de-looping around records that best exemplify Steve’s skill on guitar. ‘Intro’ begins as a hazy, lulling song that suddenly sweeps us off our feet with impressive, runaway sounds, then brings us to a halt with cooler rhythms that resonate through the entire album. The effortlessness of ‘Intro’ sets the bar high for the album, with the expert pacing and experimentation with time signatures and beat. ‘Street Thumpin’ continues this beat with an exotic, sitar-like feel akin to Newton Faulkner’s ‘Hand Built by Robots’.

Tracks ‘For My Brother’ and ‘For My Sister’ are both very complimenting. ‘For My Brother’ has such a deep intimate sound. The love and emotion that emanates out of Steve’s fingertips builds so beautifully. ‘For My Sister Too’ is similarly uplifting with climbing and soaring arpeggios and strong percussive technical skills. Unexpected chord pairings make them interesting listens and create rich layers to the tracks. ‘Minding Molly’ also has a similar personal element, drawing nostalgic circles through music.

Steve’s use of pace is a technical skill to be admired. It draws the listener in emotionally then suddenly distances itself, keeping a sense of mystery. ‘The Harder the fall’ showcases this brilliantly, as does ‘A is for Angst’. Both of these tracks provide an edge to the album. ‘A is for Angst’ in particular has a real bite, with chords that race and scream.

‘You Are Here’ is an exquisite track that gives ‘Life is…’ another worldly feel through magical chords and circular sounding composition. Yet it remains classic sounding, like a score from a medieval fantasy film. Stephen’s inspiration from television, film and game soundtracks is really prevalent, recalling the likes of Hans Zimmer’s work and Game of Thrones, while remaining fresh and new (Check out his Game of Throne’s score cover if you haven’t already!).

The Steve Experiment “Life Is”, displays a flurry of emotion with every pluck and heavy hand. One might think that being instrumental would not have the same power as a composition with lyrics in terms of conveying emotion. However, this album could prove anyone wrong. He has an emotion in his playing that rivals those he is clearly inspired by, Rodrigo Y Gabriela, Newton Faulkner and Cat Stevens. The technical skill displayed is so mind blowing, but the emotion and richness of each and every track champions its humbleness.

Intermission offer EPs as Pay What You Want

More Than Conquerors – Everything I’ve Learnt