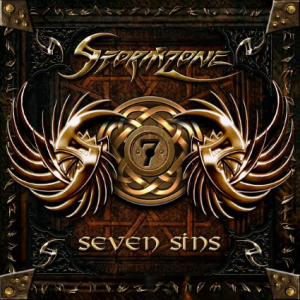 We make no apologies here at CB for promoting local bands – of any genre – especially those who don’t sit around waiting for people to do their work for them, who get out there, put faith in their music and ‘get the job done’. There is no finer example of that than local metallers, Stormzone. This is a band that literally, like its name suggests, is a force of nature. I have said before that, were Stormzone doing what they do now 25 years ago, they would have been shifting major units (as they say in the biz). Irrespective of how ‘original’ people may think the band sounds, they’d have established themselves as top exponents of a genre due to the quality of songwriting, the production quality of their studio output and last, but by no means least, consistently stunning live performances. Knowing what could’ve been could be disheartening..to lesser mortals.

But, nothing deters the SZ boys from doing what they do and a read at Mel Brehaut’s interview with John ‘Harv’ Harbinson and Steve Moore, illuminates this point much better than my own words ever could. These guys don’t care what anyone says about them, they don’t care that their music is now not viewed as being trendy (because believe-it-or-not kids, Metal was trendy right up to and into the 90’s). Stormzone do what they do, and they make it work for them. They don’t waste time trying to please people who will never be pleased no matter how good, how professional, how technically adept, they are. But, by the same token, neither do they blindly re-write the same album over and over again. Each album to this point has been different in parts, reflecting perhaps occasional personnel changes – and the parting of ways with lead guitarist, David Shields, since ‘Three Kings’ illustrates that point.

‘Three Kings’ was going to be a very hard act to follow – it received almost universally glowing reviews in the HR/HM press, and that being so, the easiest solution was to do…erm…’Four Kings’, if you get my drift. But, no. The SZ guys went straight to seven. Not only that, but the band has attempted that most divisive of rock ambitions – the concept album – an undertaking that can be stellar when done well, but can be derided as pretentious, usually by those who have an axe to grind with any song longer than a Ramones’ one. Stormzone are not The Who or Pink Floyd, nor do they pretend to be (or want to be), but they are heavily influenced by metal bands like Iron Maiden, Queensryche, Judas Priest and Helloween – all of whom have attempted a concept album to varying degrees of success (Queensryche’s ‘Operation: Mindcrime’ still being one of my favourite albums of all time). So, the question is ‘can Stormzone match their heroes?’

The simple answer is ‘yes, they have’. In terms of delivering 12 songs full of top notch musical performances, ‘Seven Sins’ absolutely delivers. I’m vocals man by default but, by crikey, there is quality riffage aplenty (often more than one stellar riff per song), brilliant solos of all types (shreds, dextrous fingering, soaring notes and combinations of all 3) and stunning guitar harmonies all through ‘Seven Sins’ and praise must go to Steve Moore for his work on the fretboard and behind the mixing desk, as he is also the man behind the album’s amazing production. The SZ rhythm section of Davy ‘Basher’ Bates and Graham McNulty provide such a solid basis for the music it could almost go overlooked and that would be a mistake. Bates’ work is to the fore right from album opener ‘Bathsheba’ which is a ferocious song accentuated by Bate’s work on skins and cymbals. McNulty’s work is highlighted by the opening work in the title track where his bass line is the prime mover. To have such technically demanding music reproduced correctly needs all the component parts to be in sync and Stormzone is a well oiled machine. And then there is ‘Harv’ – who quite simply is one of the best metal vocalists in the world, and proves it once again with an absolutely flawless exhibition of the Bruce Dickenson/Geoff Tate style of Metal vocals – operatic, pure, powerful, aggressive at times, but always returning to the melodic side of metal vocals – never better illustrated than on my favourite track – ‘Raise The Knife’ – quite simply a majestic song.

There are several songs on ‘Seven Sins’ which could have popped up on any of their later albums, especially ‘Three Kings’. ‘Bathsheba’ (the story’s femme fatale), ‘Your Time Has Come’, ‘The One That Got Away’, the title track itself all have the classic, epic Metal feel that longstanding SZ favourites such as ‘Where We Belong’ or ‘The Legend Carries On’ have. ‘I Know Your Pain’, ‘Raise The Knife’, ‘Born of the Damned’ have the sleek Power Metal feel of songs like ‘The Pain Inside’, ‘Spectre’ or ‘Fear Hotel’ from previous albums and ‘Abandoned Souls’ hits the heavier tones, akin to Metallica or Testament, that the band has never been afraid to resort to when the time comes for out ‘n’ out aggression. Where the album differs from previous albums, barring the less heavy debut, ‘Caught In The Act’, is in a few songs which definitely strike a more mainstream Metal note and shows the band isn’t afraid to just find a nice simple-yet-effective Metal groove, write a good verse melody, good pre-chorus melody and then a catchy chorus, which they are then not afraid milk. ‘Another Rainy Night’, ‘Special Brew’ and ‘Master of Sorrow’ all fall into this category and for me, instead of watering down the Stormzone pallet, actually enhance it by giving it a natural variation. Whisper is softly, but there isn’t and never has been anything wrong with a song that gets right into your pleasure centre with immediacy and stays there with tenacity. These songs do that – not unlike Maiden’s major hit, ‘Can I Play With Madness’, ironically from their concept album ‘Seventh Son of a Seventh Son’, or Queensryche’s ‘holy trinity’ that close out ‘Operation: Mindcrime’ (‘Breaking The Silence’, ‘I Don’t Believe In Love’ and ‘Eyes of a Stranger’). Will ‘Special Brew’ etc hold up the same way as the songs I have mentioned? Well, that is an impossible question to answer and Stormzone are not plying their trade in that era when metal was heard throughout the world on mainstream media. But, they are surely giving those bands a run for their money now in terms of what those bands are producing in the studio, certainly if the recently revealed ‘Speed of Light’ by Iron Maiden is anything to go by.

Existing Stormzone fans have nothing to fear – ‘Seven Sins’ is as good if not better than ‘Three Kings’. I gave that album an excellent review (here) and my appreciation for it has not dulled with time. But, inevitably any repeated listening to an album eventually exposes any small flaws and, with the benefit of hindsight, I think there are a couple of songs that could have been dropped from ‘Three Kings’ without reducing the quality of the album. I would not say that with ‘Seven Sins’ in fact, whether it be the concept itself or how it was recorded, there is a coherence with ‘Seven Sins’ that excels what was achieved with ‘Three Kings’. For instance, the slight differences in song styles seem less stark on this latest offering than on its predecessor and the more melodic tunes are more convincing than say, ‘Night of the Storm’.

What of the concept itself? I won’t try to explain it, given that Harv himself has said it is not one that can be explained in a few sentences – so the best thing to do is to click here and hear Harv explain his vision. But, let’s just say, the band’s anti-hero, Mr Death Dealer is the main protagonist. With the help of the aforementioned Bathsheba he uses various nefarious ways to ensnare his unsuspecting  victims. It is not a story that tries to be too clever or to moralise; it is just a story. Nor are there any short ‘linking’ parts involved such as dialogue or short instrumental pieces, unlike ‘…Mindcrime’. I don’t think it is any the poorer for that. The songs stand on their own two feet, outside the overall concept and going forward I think that is important that songs can come and go within the band’s live set without the need for flicks and tricks.

Stormzone folks. If you love your metal, you should love this band. That is the message I need to get across to any local person reading this who is into Rock/Metal and doesn’t know about Stormzone, who thinks that local bands cannot match the skill, talent or professionalism of bands from across the water. Stormzone is just as good, if not better, than a host of metal acts out there and ‘Seven Sins’ is the proof of that, if further proof were needed.

‘Seven Sins’ is available now on the Metal For Nations label. The band’s next home gig is the official album launch at the Limelight, Belfast on September 5th, where they unveil not 1, but 2 new members.