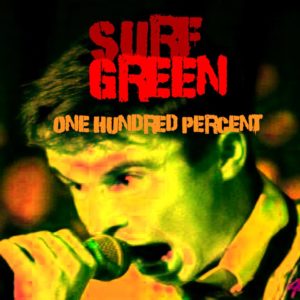 Punk rock three-piece Surf Green released their latest EP 100 Percent and were gracious enough to forward me a copy to tell you, the people, what I think of it. In a sentence: it’s loud, it’s fast and it’s punk. Did you expect anything else?

Much like their live sets, Surf Green’s EP positively drips with enthusiasm and barbarity. They doubled down on their strengths and produced their most impressive, polished and high sounding EP to date. Whereas 2017’s Real Friends lacked the balance between live, electricity energy and necessary production, resulting in an audible lack of identity, 100 Percent almost sound like a different band. SG have fixed their mistakes and we have been rewarded accordingly with a fantastic, vocally driven and brutal EP.

The opening track is almost the most important one, as it sets the tone and pace of the album. The band do exactly this with ‘Santo’, with its battle cry guitars, screeching vocals and zero ***** attitudes. The perfect metaphor for Surf Green, short, sweet and to the point with its clear punk vibe. Follow up song Stay is a bit more sophisticated, with a much more noticeable percussion track and an emphasis on backing vocals which adds several layers to the song. SG have discovered there is flexibility in their beloved brand of punk as Stay demonstrates. The consistent beat driven rhythm radiates a skate rock, early 2000 vibe and is infectiously enjoyable.

Third song ‘Reasy Ajaro’ illustrates my earlier point, that Surf Green is a LIVE band, as they have thankfully realised in this tune as they seem to bottle their almost relaxed rage on the EP’s most impressive track. Machine gun riffs and drums reminded me of Iron Maiden, while the vicious lyrics and driving rhythm keep the three-piece true to their punk roots. Immediately following the most notable song comes the most surprising one, ‘Craving More’. I am biased in my review of this particular tune, as I love songs with little surprises, and after the relentless lead guitar and drum emphasis, I broke into a large grin upon hearing the chunky bass take precedence over the steely guitar riffs that form the backbone of the EP. ‘Craving More’ portrays a much chunkier sound, while putting to ease any queries you had about whether or not Blink-182 was an influence (apparently they were)

Final track ‘Gladys’ is almost as important as the opener. As the bookend, it is the last thing the listener is supposed to hear. Therefore, SG though it prudent to soundtrack an avalanche for their closer. A true show stopper and mosh pit anthem that encapsulates all the energy of their live sets climaxed with a frightful breakdown, Gladys is the only end that 100% could have in hindsight.

A ravenous EP from a hungry band, 100 Percent is out now and is to be ignored at your own risk.