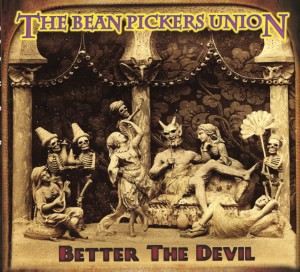 The Bean Pickers Union are a musicians collective, based in Cambridge, Maine and fronted by veteran singer/guitarist Chuck Melchin. This is their second album, following their critically acclaimed debut, ‘Potlatch’, released in 2007. The band seem to have very a D.I.Y ethos with this album being self-funded, self-produced and self-released. The first thing that strikes the listener from the minute the album kicks off with the moody instrumental ‘Proem’ is the quality of the recording and the musicianship. It very much has the feel of a band captured live in the studio, minus any studio trickery.

The sound is perfect for Melchin’s ‘Tales from Middle America’, very much in the vibe of The Jayhawks and Wilco with a touch of Neil Young thrown in there for good measure in terms of the lyrical feel and Melchin’s fragile vocal delivery. Melchin, like Young mixes the observational with the personal in his lyrics in a way that is unmistakably genuine. He seems to compromise very rarely with his lyrics; rarely letting them give way to simpler phrases that would allow a more mainstream delivery. I admire that and, at its best, it really works.

‘Magnolia’ encapsulates what Melchin is all about lyrically; he’s downbeat, wistful with a touch of humour mixed in, as he rhymes off all the reasons why he’s been stuck with the wrong woman in the wrong place for too long. ‘Down’ is full of melancholy and regret about a fall from grace and a slow road to recovery. ‘Numb’ does little to lift the mood thanks to the wonderfully mournful organ and violin performances, again captured so clearly, as Melchin recounts a tale of old age, alcoholism and agoraphobia. ‘Sometimes I Just Sits’ is a fine piece of observational writing regarding small town America.

It’s not all downbeat thankfully. Songs like ‘Burning Sky’ and ‘Ditch’ show that The Bean Pickers Union can handle a good ol’ road tune.  ‘Burning Sky’ conjures up images of desert nights complete with Tequila and treacherous women. ‘Ditch’ is a trucking/railroad song and a real foot-stomper – a real highlight on the album. The album could maybe do with another one or two songs of this ilk to balance up the downbeat songs.

Overall, this is a fine slice of pure Americana; well written, arranged and executed and is a very pleasant listen. Melchin’s vocal style is warm and tuneful but a little limited and ‘safe’ and I feel this limits the melodies he sings and thus tends to make the album sound a little ‘samey’ on repeated listens. Songs like ‘Jolene’ (not a Dolly Parton or Ray Lamontagne cover), ‘Tranquility’ and ‘Cameo’ tend to merge into each other in an almost soporific way. But at their best The Bean Pickers Union are the real deal and for fans of this genre ‘Better The Devil’ is well worth checking out.