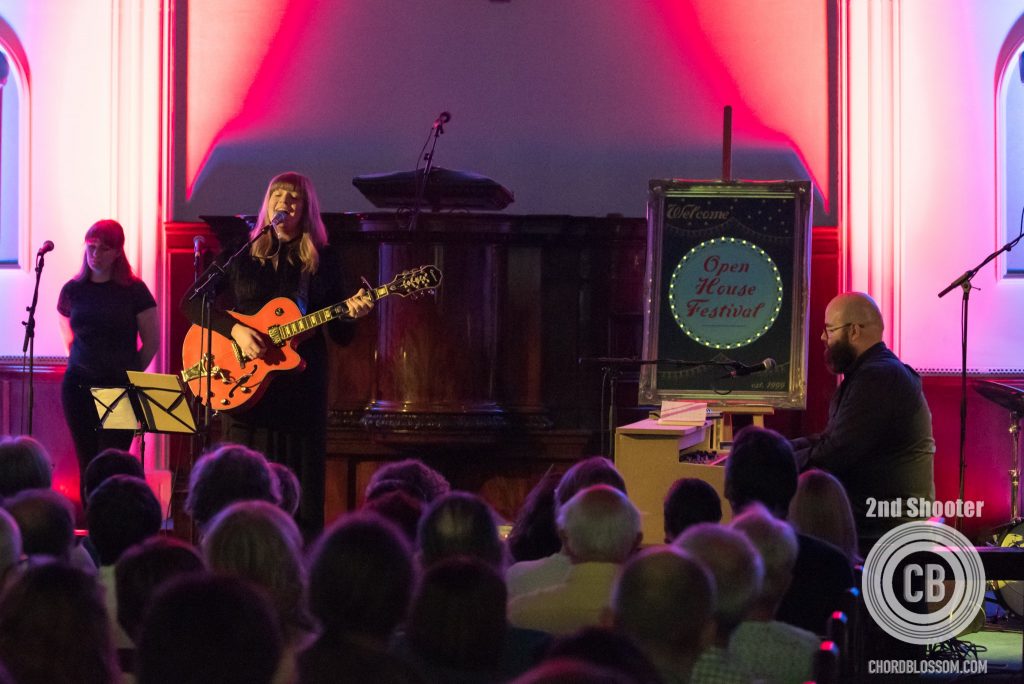 The Darkling Air is the happy result of the coming together of two veterans to the Irish creative scene. Forming as an independent duo in 2013, Michael Keeney and Rachel McCarthy previously worked together on the production side of albums for Foy Vance and Farriers, with Keeney arranging and McCarthy featured as backing vocals on the records. The venn diagram of their musical interests and experience is an eclectic mix of eras and genres, meeting in the middle as fans of the modern classics Joni Mitchell, Angel Olsen and, more local The Divine Comedy.

The Darkling Air released their first album “Untamed and Beloved” in 2016 as a critically successful atmospheric masterpiece. Keeney’s 20 years of experience in producing and composing, working with artists such as Lisa Hannigan, Villagers, Beoga and the RTE concert orchestra, when partnered with McCarthy’s alternative folk background creates a hypnotic moody soundscape. When asked how a softer sound bodes with the renowned native punk music of Belfast they responded with new insight;  “it’s just a different kind of energy.  Music has grown to accept a wider pallet in our ever expanding Northern Irish music scene.

You’re just as likely to come across the ambient electronica of Ryan Vail and Elma Orchestra as you are the raw energy of Sister Ghost. Somehow all of these [songs] including ours encapsulate a new Northern Irish landscape.  Broader in vision perhaps than the youthful fight to escape punk encapsulated in the 70’s, but it’s obvious that taking in a wider view is part of a more modern Northern Ireland musically, socially and politically.”

The sense of this changing place takes its form in Darkling Air’s most recent album ‘Ancestor’. Released in November 2019, the well balanced ten tracks are written with a focus on place, “the sea, the geography and history of everyday surroundings, people, mental health, art”, taking an almost theatrical approach to narration. The holistic progression from present to reflection on past and hope for future laced with a continuous motif of stay and return creates its own 40 minute world.

The opening vamp of ‘Silver Lightning – Prelude’ eases listeners into a low, legato based soundscape, accentuating McCarthy’s crystal clear vocals singularly before the more upbeat string and piano accompanied ‘Old Romantic’. This flowing love song, the album’s second single uplifts, traces a story of learning to trust from a “blue existence” and “own lonely bed” to a bridge which steadily states “you’ve convinced me that it’s real” as a repeated revelation till the end of the track. McCarthy’s voice is poignant and sweet and it leads the listener through the nest of sounds like a guiding light.

The tenderness describing new motherhood in ‘Beholding You’ almost aches; “I won’t always have the answer / but I will always be here on stand-by”. “This new heartache” and “yearning for courage” is so human in the midst of a celestial piano score and otherworldly bookended lyrics “this is your first day on planet earth”. Magic realism sparkles in the writing here and McCarthy admits to picking “carefully non-specific [lyrics] to get to the heart of issues in a more universal sense” with use of visual metaphor.

The next tracks take a twist down towards a more bleak tone; ‘The Colour It Bleeds’ plays out a slowly sinking waltz through descending chord progression. Here the leave or stay theme is expressed as a fight or flight mentality towards grief and depression “when I sink this low / I’m immovable / grief doesn’t come with instructions”. With such clear and simple vocal production, the use of multiple harmonies in this chorus stands out starkly, the repeated refrain “don’t water it down” almost reminiscent of Anne Sexton’s “as for me, I am watercolour, I wash off”. These haunting vocals follow through the next few tracks, ‘Your Words, Not Mine’ tells of a love that falls away (“I don’t love you anymore”) whilst ‘Neat & Tidy’ offers a more hesitant, yet more optimistic spring cleaning second chance (“picking up the pieces” / “we’re cut from the same tree / they polished you and painted over me”).

Structurally, ‘Ancestor’ could be one continuous piece of music; the new love moving into a sadness which offers two options (stay or go) continues with a more transcendental look forward. ‘Octogenarian Mermaid’, suitably ambiguous for its futuristic contemplation, dwells, this time most explicitly, on water imagery with McCarthy’s voice taking the role of a sea siren lapsing between the mystical and the real (“holding to her hand so slippery”). This atmospheric presence is reminiscent of the chamber pop of Stuart Murdoch and Belle & Sebastian. The cyclical lyrics and use of repetition helps hone the reflective feel of the music and a previously referenced study of pattern (‘On Creeps the Night’’).

Every piece of this structure culminates in the title track which opens with a full and rippling soundscape. It has all been leading to this and the richness of the instrumentals suggest finality while the questions explored throughout the album are finally asked (“Did you soul feel the static?” / “How far have you travelled?”) in a confrontation with the past. The awareness of continuation of life, no longer related to the natural world but to a family line (“I still run through your bloodline”) builds to an impressive instrumental breakdown; heightened by the drum which acts as a percussive human heartbeat to the piece. This musical resolution against a vocal questioning simultaneously juxtaposes and ties loose ends together. The veil is thinnest here and, in terms of sound and subject, it is the least alone McCarthy has been throughout the entire album. The final track quietly follows as a buffering wind down and a slip away into nothingness (‘Globe Lights’).

It makes sense upon discovering McCarthy’s illustrative roots just why her words paint such striking pictures. When playing live she is adamant to make a physical attempt at conjuring the images in her head through projections of fim. What is so captivating about listening to this kind of musical scaping is, it creates a base level of noise which, like the water level so often sung about, needs to rise or fall to be noticed. The epiloging track feels like a lulling off and when the album does end, the silence still seems to continue to buzz with an undetectable music. All is suspended for a brief moment before the spell breaks and reality floods back in like the rolling credits in a film.