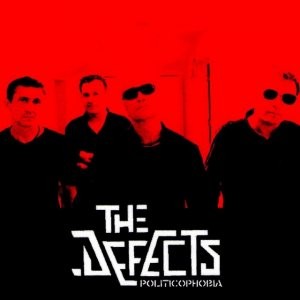 With the release of the Good Vibrations biopic, it’s easy to surmise that Belfast punk began and ended with Terri Hooley’s label. Bollocks. If anything, it became even harder and more serious as time went on. And The Defects personify this.

Their first LP, ‘Defective Breakdown’, is a master class in merging ’77 punk rock with the darker, more nihilistic strains of the ’82 wave (with hints of post punk in the mix). This was the soundtrack to a city barricaded to the hilt, a city where stepping onto the streets at night could lead to your death. It still sounds startling today.

Reforming full time in 2010, they’ve gigged up and down the country as well as taking in the UK, Amsterdam and Australia. Two new singles, ‘Revelator’ and ‘Hill Street’, showcased a more old school sound with a slight American influence creeping in. So expectations are high. Does the album measure up?

Opener (and single) ‘Hill Street’ pays tribute to the Belfast punk scene that spawned them. It’s uplifting and energetic, capturing the feel of sitting in the street with a bottle of White Lightning and waiting for the gig to start. With an opener like this, what can go wrong?

‘Riot Free Zone’ is a slightly disjointed, but still pumping number about the need to move on from the past and create a utopia based on there being “no religion, no machine gun.” Musically, there are hints of the Dead Kennedys in the middle eight and the various riffs make it almost Captain Beefheart like!

We all know ‘Revelator’, and nothing more needs to be said about it. But the album hits the kerb with ‘Limbo International.’ A dull and monotonous song due to the tempo and unmemorable riff, it’s one redeeming feature is it’s chorus (shamelessly lifted from ‘Beg to Differ’ by Prong).

‘Get Up, Stand Up’ manages to regain the momentum by taking the Bob Marley song and punking it up. However, it sounds ten times better live with this recording sounds cramped and stilted by comparison. ‘Red Box Blues’ passes the listener by without leaving an impression.

‘Repentagon’ is, hands down, the best song on here. A choppy, off kilter riff not too dissimilar to Andy Gill (Gang of Four) adds to a strange and unusual number that will sound immense in the live arena. This song is enough to justify buying this LP despite its problems.

The big problem is the decision to include re recordings of ‘Metal Walls’, ‘Guilty Conscience’ and ‘Killer on the Streets’ (all from the first LP). While there is nothing at all wrong with the songs or the recordings, it does suggest that the band ran out of songs and needed to fill space on the disc.

This is a shame, as The Defects are one of the most exciting acts on the live circuit. A modern, beefed up sound with songs filled with rage, despair and nihilism would be the perfect soundtrack to a world where people still think flags are important and seemingly unaware that millionaires are permitted to dodge tax by the government.

Ultimately, what we are left with is an LP that, in places, is brilliant but falls short of expectations due to rerecorded material and some subpar songs. If it had been trimmed to 8 songs, we’d have been looking at a contender for album of the year. But it is not to be. Perhaps next time?

Still better than anything by Stiff Little Fingers or The Undertones, though.