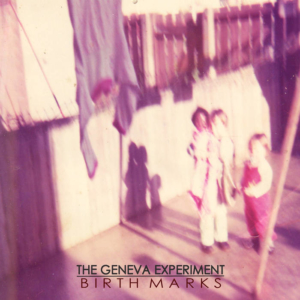 We here at Chordblossom were big fans of prog rock/metallers Dyingbreed, who have been mysteriously silent, on presumed hiatus, since late 2013. So we were pleased when vocalist James Moore announced the formation of another band, this time alt rockers The Geneva Experiment. The Coleraine/Derry based group released a few singles back in mid 2014, which were metallic-encrusted slabs of rock; however a lineup changed seems also to have signalled a change in their sound. Their first release under this new lineup, Birth Marks, was released on March 11th this year, with first single ‘Redroom’ following shortly after (premiered on our site here). We finally got our hands on a copy of the EP and sat down to give it a listen.

First up is the aforementioned ‘Redroom’, which, unusually, is written from the perspective of an attacker seeking out potential victims on a night out. It’s a cautionary tale that is well written – often uncomfortably so – with Moore’s vocals and the jangly alt rock sound of the track melding seamlessly; the dreamy midsection is especially lush – yet creepy.

Next up is a rather poignant break up song in the form of ‘Sincerely Yours. E’, which tells of a relationship that’s toppling over the edge (“our shadows whisper what I already know”). It fizzes with restless energy, with Moore putting in a towering vocal performance, his voice dripping with emotion.

Finally, ‘El Capo’ launches from the speakers with vitriol and urgency. Sonically this is the song with the closest links to their heavier former incarnation, with more jagged edges and less polish than the other two tracks. It hisses and spits as Moore sings harshly about the darker side of the online world; trolls, obsessive gamers and internet warriors are in his sights as he takes a screaming swipe at the whole sordid scene, accompanied by rather punk sawing riffs and pummeling drums. This band are nothing if not aware of the current issues we all face in the twenty-first century, it would seem.

A glossier beast than Moore’s previous vehicle, The Geneva Experiment nonetheless pack plenty of punch and social awareness. Sharp and fervent, their songs are both timeless and current. An excellent start, then.