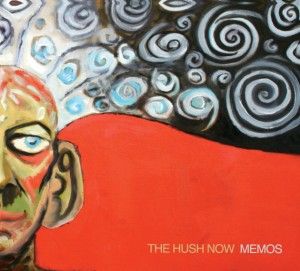 Boston Massachusetts indie – pop five piece The Hush now, self released their third album Memo’s on the 17th of June this year. Influences from The Cure, The Smiths and Joy Division are musically married together to create an eclectic sound that The Hush now can claim as their very own.

The opener ‘Arkansas’ begins with a simple mellow piano solo that sounds promising when singer/song writer Noel Kelly’s distinctive vocals accompany it along with an array of drumbeats and nifty guitar riffs. It is sure to grasp your attention leaving you curious as to what’s next to come. ‘Clouds’ is a powerful track that allows Barry Marino’s great drumming skills to be shown off throughout.

There are some down sides to the album. You may find yourself making good use of the skip button on quite a few tracks, particularly ‘The Glow,’ using a mish-mash of synths that almost sound like that annoying crazy frog track (we were all once trying to avoid) has collaborated with the B52’s Love-shack! It doesn’t work well as one may imagine. ‘Rooftops’ gives the album a chance to redeem itself, the upbeat feel good track is by far the best and shows the band can both make great music and write great lyrics, it could very well be a summer festival anthem.

The band have been heading in the right direction to get amongst the big leagues, having played South by South West festival in Texas and getting regular plays on BBC 6 music. To make the step up though they need to scrap the filler and create a consistent album.