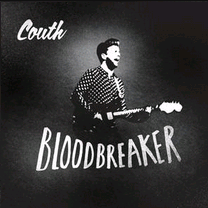 Lisburn lads, The Couth shook up the indie scene here a while back with the release of their EP Casual Sex at the Omniplex not only with it’s name but, with melody driven, energetic surf style indie punk-basically they created their own genre. Continuing to prove they aren’t your typical indie/garage band they released it’s successor Bloodbreaker EP on 28th June. Their debut was an absolute belter but this EP shows the lads have defined their sound, expect raw guitar riffs, well thought out lyrics and the The Couth to be your new favourite band. Dave McCrums’ vocal abruptly kicks things off with title track ‘Bloodbreaker,’ a track that packs so much energy into just 2 minutes 16 seconds, you may feel like you’ve just been hit with an adrenaline shot. An incredible live track and to nail every word and keep the momentum going just shows what great musicians these lads are.

‘Cane it Next to Me’ sees the EP slow down to more of a Vampire Weekend style melody but this is one you’ll still want to dance and sing-a-long to as is ‘Down by the River’ which channels the Strokes, the Ramones and even the Beach Boys throughout. This is raw honest music, a band who have really found their feet and this shows through in their epic live performances, expect big things for The Couth.